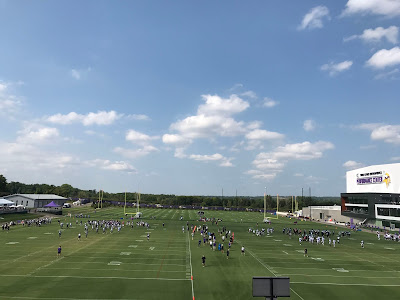 The Vikings hosted the Jaguars for the first of two joint practices at TCO Performance Center. Daniel House has a few observations from the up-tempo practice session.


The Vikings hosted the Jaguars for the first of two joint practices at TCO Performance Center. It was a high-tempo practice with a heavy amount of reps spread around for all of the players on the roster. This type of session was the perfect way to evaluate some of the players who are fighting for final positions on the roster. There were so many things to watch, but here are a few observations from areas I focused on closely.

Thielen and Diggs having their way, Chad Beebe emerging
In the WR/DB drills, Stefon Diggs and Adam Thielen were winning every rep against the Jaguars defensive backs. Diggs ran a beautiful comeback on A.J. Bouye in which he gained at least two yards of separation. He beat Bouye twice in the drill and showed off flashes of his quickness and patience in-and-out of his breaks. It’s what makes Diggs such a unique receiver when you watch him work in drills. Thielen had similar success on a beautiful out route against Don Carey and a deep route combination against Jalen Myrick. It doesn’t matter who is covering Diggs and Thielen, they always get open.

In the same drill, Chad Beebe was one of the stand-out performers. He has been putting together a very strong second half of camp. His feet and patience as a route runner are on display when he is getting separation out of the slot. He had an excellent quick slant against D.J. Hayden and was smooth out of the break to haul in a corner route on Jags cornerback Bryce Canady. He has slowly been making an impression as camp progresses and is likely a practice squad candidate if the momentum continues.

Offense doesn’t air it out
The Vikings didn’t spend much time working the ball down the field via the passing game. For the most part, everything was underneath concepts and a heavy emphasis was placed upon testing the tight ends/running backs in the flat. Perhaps Thursday’s session will be one where the team pushes the ball up the field frequently. Many people have been discussing how the Jags defense was ahead of the Vikings’ offense. However, part of this was due to the type of play script the team deployed. The other portion was related to execution in a few situations, which I highlight later in this post.

The highlight play of the day came when Kirk Cousins found Kendall Wright up the seam for a red zone touchdown. He fired the pass into a tight window between D.J. Hayden and Tashaun Gipson Sr. It was an excellent display of accuracy and arm strength as he delivered the throw perfectly. These are the type of throws Cousins can make on a consistent basis that separate him from other quarterbacks.

Tight end Tyler Conklin had a couple nice grabs in the flat, but struggled as a run blocker, losing a rep badly to defensive end Hunter Dimick. Outside of the main core of tight ends, Conklin and Blake Bell have more work to do if they want to become contributors as the No. 3 tight end.

Team run blocking stands out
On the other hand, David Morgan was on the positive end of numerous run blocking reps. When the Vikings use 12 personnel, they have one of the best success rates running the football. As a unit, the Vikings had a few positive rushing reps, including during one team drill. Tom Compton opened a nice lane for a Dalvin Cook inside run, where he planted and cutback for an explosive rushing play. The run blocking was a strength during the preseason game and it continued during the joint practice. Riley Reiff down blocked Calais Campbell hard to open a lane for Latavius Murray, who picked up a nice gain. Murray is looking very smooth and quick through all of his reps and could produce very well as a complementary option to Dalvin Cook.

The Vikings’ goal line running was less impressive and consistent on either side of the offensive line. However, C.J. Ham had a great lead block to spark a nice run by Dalvin Cook in the drill. It’s clear an emphasis might need to be placed upon running the ball better on the goal-line. Nonetheless, outside of that area, there has been a heavy amount of success on interior and outside runs because of the interior’s ability to get to the second level. During rushing periods, I had marked down positive reps for Cornelius Edison, Josh Andrews and Tom Compton for second level blocks. The team has a few offensive linemen with the necessary movement skills for the zone blocking scheme and it helped spark a few successful runs.

Thomas’ eye-popping cut
At the running back position, Roc Thomas had one of the most lethal cutbacks of camp. He planted and exploded so hard, all the defensive lineman could do was fall over. Thomas had a few notable runs and Mike Boone stood out in the screen game, flashing a great spin move. Right now, Thomas probably has the edge, but the preseason will be a major evaluation point for the No. 3 running back job.

Dropped interceptions
Safety Harrison Smith dropped two interceptions, including one that went through his hands across the middle. As a defense, the Vikings dropped roughly five passes they should have picked off. One was a telegraphed pass by Blake Bortles near the end zone, which went through the hands of Xaiver Rhodes. Nonetheless, Rhodes redeemed himself with an excellent pass breakup on a Donte Moncrief fade to the back corner of the end zone. He stretched out into the passing lane and knocked the throw away.

Another dropped interception example came on a poorly placed Bortles throw across the middle that linebacker Anthony Barr was unable to haul in. The only player who successfully completed an interception was Terence Newman, who picked a slant intended for Marqise Lee in 7-on-7 work. The secondary was in the position to make plays, but just couldn’t close on the available opportunities.

Rookie cornerback Mike Hughes also stood out in the 1-on-1 drills, batting down a comeback intended for wide receiver Jaydon Mickens. He stayed step-for-step with Mickens and reached around for an excellent pass breakup. Hughes’ quick feet and hip fluidity continue to show up in drills as he often perfectly shadows receivers throughout drills. When it comes to rookie cornerback Holton Hill, there are more inconsistencies. He lost a few reps, including on a quick slant against Rashad Greene Sr. in team drills. There are moments where you see the potential, though. Hill was in excellent position to knock away a Tanner Lee throw in the back corner of the end zone during a red zone 7-on-7 drill.

Zoning in on O’Neill
It was worth zoning in on Brian O’Neill for reps, especially considering he was working with the first-team unit on Wednesday during Rashod Hill’s absence. He held up relatively well, but there were a few moments where he struggled. This was particularly the case when he was long-armed or edge rushers used power/speed to attack him. However, I had more positive reps marked down than negatives in the team sessions. He showed off his agility and recovery skills to redirect Yannick Ngakoue outside. He also held strong and anchored against a stunt where Malik Jackson rushed to the edge. However, he lost a rep to Carroll Phillips where he feet got tied up and he lost his balance. He nearly recovered to anchor, but lost the rep. O’Neill also lost twice to Ngakoue in various drills. O’Neill had a few poor moments, but the additional reps were clearly beneficial. For every three reps, there’s about two or so where he reverts back to past habits.

Mike Zimmer also talked about O’Neill’s run blocking ability. I watched him closely and there were at least two reps where he managed to get into the second level and finish blocks for runs to the edge. This might be an underrated strength within his skill-set because of his superior movement skills.

Barr rushing the passer, Kendricks in coverage
Perhaps linebacker Anthony Barr will be tested as a pass rusher during the regular season. During one team session, he created a nice pressure off a Bortles quick slant intended for Keelan Cole. This is an intriguing role for Barr, who has all the potential to rush the passer if utilized in this type of role. In the same position group, Eric Kendricks had two pass breakups when covering James O’Shaughnessy and Niles Paul across the middle. Eric Wilson had a nice pressure off a blitz and was showing off his range in coverage, too.

On the defensive line, there were several notable performances from the second-tier players. Jaleel Johnson was very disruptive at the point of attack and was hand-fighting to get in the backfield. He notably destroyed guard Michael Dunn to pick up a tackle for loss against running back Corey Grant. In addition to Weatherly, David Parry logged two pressures, including a dominant rep against K.C. McDermott. He has slowly improved throughout camp and has quick feet and a little power to be disruptive. In addition, Stephen Weatherly had a fantastic session. He blew up running back Tim Cook in the backfield for a tackle for loss, shedding the block and displaying excellent hands. On the next rep, he created a QB hurry with a long-arm as Ifeadi Odengibo barreled down on Jags backup quarterback Cody Kessler. Parry is making a charge over the second half of camp to claim a roster spot.

Outside of the depth players, Danielle Hunter was dominating the entire practice against tackle Cam Robinson. He had at least three snaps where he would have sacked Blake Bortles because of his strong pass rushing moves. I’ve said it numerous times, but Hunter is looking more natural in pass rushing situations and it showed up during numerous team drill sessions.

Kickers dual it out
I had a poor angle for the kicking drills, but it appeared Daniel Carlson finished 2-for-3 (missed from 44) and Kai Forbath drained all three of his tries from 41, 50 and 54 yards out.

For updates from the morning press conferences, you'll want to check out this piece.