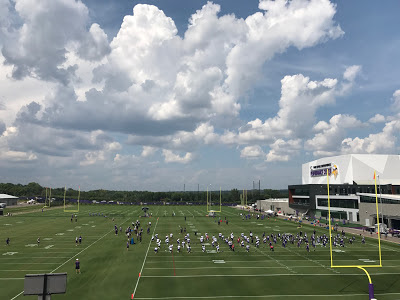 On the eve of joint practices with the Jacksonville Jaguars on Wednesday and Thursday, the Vikings continued training camp sessions. Daniel House takes you inside another training camp notebook!


On the eve of joint practices with the Jacksonville Jaguars on Wednesday and Thursday, the Vikings continued training camp sessions. On a steamy day, the team didn’t practice in pads and focused primarily on passing work and installation. There was more action between the defensive backs and wide receivers to evaluate the growth each position group has made throughout camp.

Here are a few small takeaways from a short practice. Most of them are related to the skill players because there were no pads for the players up front.

Cousins-Cook connection
One of the highlights of the day came when Kirk Cousins drove a deep wheel route to running back Dalvin Cook. Cousins fired the ball deep and placed the pass perfectly for Cook, who had two steps on linebacker Eric Wilson. Cook is looking extremely comfortable on the field and has dual-threat ability. His pass-catching ability, combined with his explosive nature as a runner, will allow offensive coordinator John DeFilippo to use him very creatively in the offense. If DeFilippo follows past trends, all of the running backs will be prominently featured in the passing game.

Hughes’ development is impressive
The Vikings ran plenty of 11-on-11 and DB/WR 1-on-1 drills, which tested the team’s route-running and coverage skills. Cornerback Mike Hughes was a stand-out performer throughout the day. For a few snaps, he mixed into the first-team nickel package and beautifully covered Stefon Diggs to force an incompletion in team drills. Earlier in the 1-on-1 drills, he also ran step-for-step with Adam Thielen, who snapped off his out inside. Hughes rotated his hips and showed off all of his quickness to stay tight and force an incompletion. He is so far advanced from a technical standpoint and possesses very rare athletic traits. Hughes could carve out more playing time in a rotational fashion due to his rapid growth and comfort level. After watching the developmental track of both Xaiver Rhodes and Trae Waynes throughout past training camps, Hughes has exceeded where those players were at this point in their careers.

Treadwell is continuing to flash
Offensively, wide receiver Laquon Treadwell was one of the top performers. He was getting separation off a variety of routes and had two excellent red zone grabs. During team drills, Treadwell displayed excellent body control in the back corner of the end zone to shield cornerback Horace Richardson for a touchdown grab. He also had a notable win against Xavier Rhodes on a comeback, where he was physical at the stem to gain separation. Earlier in 1-on-1 drills, he beautifully high-pointed a pass over cornerback Trae Waynes to complete a fade in the back corner of the end zone. He has improved his ability to get separation via a variety of different routes, while flashing improved ball skills, too. After watching Treadwell for the past few camps, this is by far the best progress he has made. He continues to clearly receive the No. 3 receiver reps, which shows the level of confidence the coaching staff has in his skill-set. In past camps, Treadwell was buried down low on the depth chart, but he’s progressed enough to carve out a role in 3-WR sets. Also, I think the nagging injury Treadwell suffered in last year’s training camp drastically impacted his confidence.

Now, the third-year wide receiver has to apply all of these improvements to games.

Chad Beebe has also been a strong performer throughout the past two practices. He caught an impressive deep post on Monday and added a quick slant against Mackensie Alexander in 1-on-1 drills. Beebe has very light feet and an ability to finesse defensive backs at the route stem. He was slowed up by an injury during the mid-point of camp, but is emerging again.

In addition, Kendall Wright ran a beautiful quick slant on Mike Hughes and added a smooth out against Horace Richardson in the same drill. Wright has been rather quiet in camp and will need to perform well in the preseason to fend off young competition at the position.

Barr participates in team work
Linebacker Anthony Barr practiced in team drills after working exclusively within individual drills on Monday. He was moving well and looked comfortable after missing a few practice sessions. During one of the team drills, he had a pass breakup as Kirk Cousins tried to complete a long-developing screen. Barr is going to be a player worth watching this season as the Vikings experiment with his role as a pass rusher. When Barr wasn’t on the field, Eric Wilson continued to see snaps with the firs-team unit.

Kickers tested again
Kickers Daniel Carlson and Kai Forbath went 6-for-6 during the team session of practice. They were tested on a range from 33 to 54 yards. The kicks had plenty of room and distance at all kicking depths. The battle will continue in the preseason, but Carlson’s bigger leg might give him the advantage at this point.

Injury Report
Stacy Coley, Brandon Zylstra, Mack Brown and Tashawn Bower were all present for practice, but did not participate. Everson Griffen and Rashod Hill were not spotted on the field. Mike Remmers practiced, but only went through individual work for the second consecutive day.