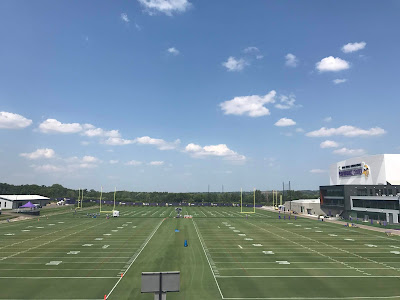 The Vikings continued training camp practices following a preseason game in Denver on Saturday. Daniel House takes you inside another edition of his training camp notebook.

Following a preseason game, the Vikings returned to TCO Performance Center on Monday for practice. It was a chance to address several areas the team struggled with during live action. There was a heavy emphasis placed upon special teams units, running back pass protection and situational work. The coaches also went through a long period of OL/DL 1-on-1’s. There wasn’t much new information to report from practice, but here a few small takeaways:

Cousins and Thielen chemistry
Kirk Cousins was showing off chemistry with wide receiver Adam Thielen throughout the practice session. He fired a pass into a tight window to complete a deep out to Thielen with Xaiver Rhodes in tight coverage. Later in the session, Cousins showed off all of his arm strength and accuracy to drive a corner route over the top to Thielen. Harrison Smith was playing coverage and Thielen’s smooth cut out of the break, combined with the perfect throw by Cousins was tough to stop. The first preseason game was an example, but Cousins can make throws at a variety of depths, including into tight spaces because of his arm talent. With receivers who can get separation like Thielen and Stefon Diggs, the Vikings’ passing game should be fun to watch.

Running back pass protection
The running backs spent an extensive amount of time working on pass protection. After the first preseason game, it was clear this needed to be an area of emphasis. C.J. Ham was the stand-out performer in the drill, along with Latavius Murray. It’s easy to see both Mike Boone and Roc Thomas are both trying to improve the fundamentals associated with pass protection. This is something that will separate the contenders in a race for the No. 3 running back job. Mack Brown didn’t practice on Monday, so the reps were spread around to both Boone and Thomas.

O’Neill is improving, Richardson’s hands
During the OL/DL 1-on-1 drills, it’s been easy to see the improvement of rookie Brian O’Neill. He is becoming more fundamentally consistent with additional reps and is winning 1-on-1 matchups. During the first few days, one would notice footwork issues and balance problems throughout reps. Now, he is using his recovery speed and feet to get in position and anchor. He won both of his reps against Tashawn Bower and looks to be gaining confidence every day. Offensive line coach Clancy Barone gave him a high-five for encouragement after one of the snaps. The growth from day one to now is very promising as O’Neill develops. It would be interesting to see O’Neill mixed into the first-team rotation to test how much he has truly progressed.

In the same drill, Sheldon Richardson’s hand technique stood out. He was hand-fighting against Danny Isidora and dominated a pair of reps. This is a skill Richardson has displayed throughout camp and it was noticeable on one particular snap in the preseason game. When his hand technique combines with all of the athleticism and power, his reps are extremely impressive. It’s clear this is an area he’s been trying to bolster before practices as he works with Andre Patterson and assistant Rob Rodriguez. Richardson and Linval Joseph inside should be an intriguing duo to watch this season.

Another player who has slowly improved is defensive tackle David Parry. He won both of his 1-on-1 reps against Josh Andrews and stood out in the preseason game. Parry could carve out a role if the Vikings value his ability to serve as a pure backup nose tackle.

Vikings sign a guard, place Easton on IR
On Monday, the Vikings signed guard Kaleb Johnson and placed Nick Easton on injured reserve. Johnson, a Rutgers product, is entering his fourth year in the NFL. He was an undrafted free agent signing by the Ravens in 2015 and has suited up for five other teams. He was released by the Bears on Aug. 11 and officially signed with the Vikings two days later. With this roster move, Aviante Collins spent a little more time at left tackle, but shifted inside to left guard throughout the practice. If injuries arise, Collins will likely be called upon to serve as a versatile option between both guard and tackle. Working him at both spots in practice provides Collins with more experience at each position.

Special Teams emphasis
The Vikings spent a heavy portion of training camp working on punt coverage and returns. It was clear this would be an area of emphasis after the team allowed a long punt return touchdown on Saturday. There was far more live action than in past practices as special teams coordinator Mike Priefer guided players on the field.

Injury Updates
Mike Remmers returned to practice and participated in the individual sessions. He did not enter for any team drills, but is likely easing back into practices. Linebacker Anthony Barr also followed the same path and did not participate in 11-on-11 action.

Rashod Hill left practice after getting up slowly in a team session. He left on a cart, but returned under his own power and participated in the remainder of practice. Brian O’Neill took over at right tackle during Hill’s short absence.

In a team drill, wide receiver Stacy Coley grabbed an out toward the sideline and got up slowly. He was evaluated by the training staff before leaving on a cart. It is unclear what happened, but he did not return to the session. Defensive tackle Jalyn Holmes also left practice under his own power with a trainer. As camp progresses, the tweaks will start to add up over time.

In addition to those players, wide receiver Brandon Zylstra, running back Mack Brown, wide receiver Stefon Diggs and defensive end Everson Griffen did not practice. Griffen was not spotted on the field, while Diggs helping his teammates through drills. Perhaps it was a veteran’s rest day for both of them.