Upon Further Review: Vikings vs. Broncos 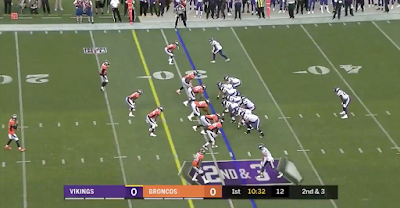 The Vikings opened the preseason in Denver with a 42-28 win and Daniel House sifted through the film to bring you several key takeaways.


The first preseason game is a time to evaluate second and third-tier depth for the first time in game situations. It also was an opportunity to see a new offensive coordinator and quarterback in action for the first time. The first-team units stood out as the Vikings kicked off the preseason with a 42-28 win in Denver. After sifting through the film, here are a few takeaways:

Vikings mixing it up offensively
The Vikings’ first-team offense looked smooth and efficient during one series of action. The team moved up the field for an 8-play, 75-yard scoring drive, capped by a 1-yard touchdown pass from Kirk Cousins to wide receiver Stefon Diggs.

Diggs had three catches for 35 yards, including a 28-yard strike from Cousins on a fade up the sideline. The throw was an example of the arm strength and accuracy Cousins can provide in the Minnesota offense. It was the type of throw Case Keenum was unable to consistently execute last year. There are a handful of passes Cousins will make throughout games that an average quarterback is simply unable to complete. The placement of this throw, along with the difficultly of the grab by Diggs, make the connection even more impressive.

The beauty of the Vikings’ effortless scoring drive was the fact offensive coordinator John DeFilippo used five different personnel groupings to attack the Denver defense. Minnesota ran 11, 12, 21, 20 and 22 personnel sets. The varying nature of the offense allowed the Vikings to keep the Broncos’ defense on their heels. The execution of the 12 personnel look (2 WR, 2 TE, 1 RB) was brilliant. Tight ends David Morgan and Kyle Rudolph held key blocks to spring Latavius Murray’s run. Rashod Hill also stood out as a run blocker during numerous reps, including the two highly successful Murray runs. This has always been a quiet strength of Hill’s game. However, Hill was slightly inconsistent with his footwork in pass protection during a few reps.

In both of the long runs by Murray, he looked more explosive and flashed his downhill running ability. Last year, Murray was recovering from ankle surgery and never looked like he had the light feet and burst many were accustomed to seeing from him. His running style complements Dalvin Cook very well and has helped the franchise create one of the team’s best running back duos since 2009.

Isidora is the top OL performer
Up front the Vikings’ offensive line was up-and-down. However, Danny Isidora was far and away the top performer of the night. In the play below, he was tested with a stunt up front and displayed awareness to pick up the defender. His hand technique has improved substantially both in these game reps and practice.

He also drove into the second level for several running plays and managed to hold his block. This is something the coaching staff has been searching for from Isidora as he tries to improve from a technical standpoint. Mike Zimmer said his base and ability to hold blocks in the second level were two areas that needed to become more consistent. In last night’s game, he executed in both of those areas. The Vikings are in need of young players to step up within the interior and Isidora made a strong impression in the first preseason game.

Within the starting lineup, Tom Compton was rather inconsistent. He lost balance numerous and fanned on a few run blocking reps when trying to engage. There were a few positive reps, including a Roc Thomas running play where he opened a nice lane. However, there were snaps like the one below where he was completely demolished and lost all sense of his technique. If Denver hadn’t woefully botched the assignment in the secondary, quarterback Trevor Siemian would have been destroyed before he could even deliver the touchdown pass.


It was also worth watching Brian O’Neill closely in his first action at the professional level. He held up well, but wasn’t tested against any top-flight pass rushers. Nonetheless, the pocket was clean on his side and he actually flashed in numerous snaps for his run blocking. It will be worth watching him in more games to increase the sample size of pass blocking reps. In the rep below, you’ll notice what I was talking about in the running game. He finishes his block to the whistle and provides a nice cutback lane for running back Mack Brown.

In the second tier units, Aviante Collins was relatively strong and showed off his athletic skills to get out in space during Roc Thomas’ 78-yard receiving touchdown.

He also opened a few lanes in the running game, including a nice rep to open a backside rushing lane for Mike Boone. There are a few reps from time-to-time where he gets outmuscled, but he held up very well during an extensive test at left guard. Perhaps the team will give him a chance to work with the first-team unit in future games.

Thomas edges ahead in the RB3 race
As for Roc Thomas, he was fantastic. He ran decisively with excellent burst and vision en route to a 3.6 yards per carry average. He also was reliable in the passing game, hauling in three catches for 102 yards. Thomas also beautifully executed a pass protection rep. He had a rather quiet training camp, but showed off the agility, explosiveness and vision, which made him a unique running back in college.

Siemian’s accuracy and decision-making
Backup quarterback Trevor Siemian struggled with accuracy at all levels in this game. He threw behind tight end Tyler Conklin, which led to an interception. Siemian was also unable to find Laquon Treadwell, who had extensive separation off a slant. The middle linebacker blitzed, leaving the middle half of the field open. Siemian instead forced a throw to Mike Boone in the flat on 3rd-and-10.


Outside of this, Siemian’s highlight throw of the night came on a nine route up the sideline. He showed off excellent timing and anticipation to complete a back shoulder throw to Stacy Coley.


Defense gets off the field quickly
On the defensive side of the ball, the first-team unit forced a quick three-and-out. Defensive end Everson Griffen was quickly in the backfield to create a disruption in the running game and cornerback Trae Waynes was in tight coverage, causing an incompletion. The starters were out of the game quickly, which gave everyone a chance to evaluate the second and third-tier units. There were a few lapses, including multiple errors on a 23-yard rushing touchdown by Broncos running back Royce Freeman. Tashawn Bower was unable to set the edge, Anthony Harris took a poor angle and Eric Wilson was unable to pull off his block.

Despite this mistake, Harris had a notable pressure off the edge via a blitz and hauled in an interception off a deflected pass by Jack Tocho. Tashawn Bower was struggling to stay disciplined in option looks, but picked up a notable sack as he showed off some of his blossoming pass rushing moves. In addition, Eric Wilson was flying all over the field to make plays and had a notable tackle in space on a checkdown into the flat. Outside of Wilson, linebacker Reshard Cliett was the lone stand-out performer at the position. He had two tackles, including a great tackle-for-loss and notable play in coverage. Cliett has range and isn’t afraid to help in the running game, as evidenced below.

Kentrell Brothers was on the other end of the spectrum. He missed two tackles and was out of position/alignment throughout the night.

On the defensive line, Jaleel Johnson had a few disruptive snaps and David Parry completed a great tackle-for-loss. Parry was having a rather quiet camp, but could provide value on the roster because of his past experience at nose tackle.

Jalyn Holmes was also taking advantage of limited snaps. He caused two pressures, including one where he flashed a spin move. You see the potential from Holmes in practice, but he needs to continue receiving reps to develop.


Check out Jalyn Holmes' spin move on the Jack Tocho interception. You see flashes of his potential in games and practices. The upside is very high with a player who features so many unique traits. #Vikings pic.twitter.com/JIUpj5Og4j
— Daniel House (@DanielHouseNFL) August 12, 2018

Tocho redeems himself
Defensive back Jack Tocho was beaten twice on 19 and 36-yard receiving touchdowns, but managed to redeem himself with a pass defensed and interception. He led the team in total snaps played last night, so apparently the coaches were very interested in watching him closely. Cornerback Mike Hughes nearly hauled in an interception during the one passing play he was targeted. If he could have kept the wide receiver from getting inside position, he would have easily snatched an interception over the top. However, Hughes was rather impressive in run support and had two sound tackles, including one in space.

Cornerback Holton Hill was targeted frequently and didn’t hold up well in coverage. He was in position to make plays in several situations, but wide receivers managed to receive enough separation to win the snap. You can tell he is trying to master all of the technique being tossed his way. Hill is still learning and has all of the tools, especially when you see the flashes of potential. At Texas, he was fantastic as an open field tackler and could break on the football so quickly. The play below shows off all of the length, athleticism and physicality that make Hill a unique player.

Special teams units were rocky
The special teams coverage and return units really struggled throughout the night. During a 78-yard punt return touchdown by Isaiah McKenzie, the unit completely lost outside contain. Holton Hill, Tyler Conklin and Tray Matthews were all out of position, which helped McKenzie break free for a big score. It’s safe to say special teams will be a major emphasis in practice this week.

Kickers are tested in a game
However, the kicking battle was actually very fun to watch. Daniel Carlson bombed a 57-yard field goal and drilled a 39-yard try earlier in the game. He was also 4-for-4 on extra point attempts, while handling all of the place kicking duties. Kai Forbath was tasked with the kickoffs as the Vikings tested both of the kickers’ weakness areas – Forbath’s kickoff depth and Carlson’s intermediate field goal accuracy. They both executed in their roles on Saturday night.