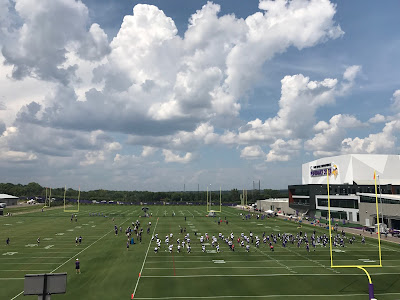 The Vikings continued training camp with their second full padded practice of the year on Tuesday. It was the last chance to see the team before an off day tomorrow. Daniel House provides a few of his key observations in another training camp notebook.


The Vikings continued training camp with their second full padded practice of the year on Tuesday. It was the last chance to see the team before an off day tomorrow. They continued to test both sides of the ball up front and emphasized red zone work throughout the session. It was easier to evaluate the line of scrimmage during the second day of partial contact.

Cousins picked off, but showing confidence
In a 3 vs. 3 half field drill, Kirk Cousins delivered a great strike to Kyle Rudolph over the top of Harrison Smith to complete a corner route. Cousins was facing a little pressure in Tuesday’s session, which impacted some of the timing with his receivers. One instance occurred when Tom Compton was beaten on the left side and Cousins forced a corner route intended for Adam Thielen. Mackensie Alexander stepped in front of the pass and sprinted the other way for an easy run after the catch.

Cousins also showed off some of his arm talent during a team drill as he fired a strike to Laquon Treadwell, who ran a beautiful "in" route against Trae Waynes. The pass was fit into a tight window where only Treadwell could make the grab. The third-year wide receiver has shown not only more ability to gain separation, but he is tracking the ball naturally outside of his frame to make plays. Cousins also tossed a pass deep to Stefon Diggs, who made an acrobatic catch with safety Anthony Harris draped all over him.

The offensive line struggled during stretches of practice. Tom Compton was at left guard and Rashod Hill missed another practice after initially coming out in pads. Mike Remmers also left practice early with an apparent injury, so Danny Isidora slid into the right guard spot. It meant many of the key pieces up front weren’t working together. For now, the defensive line is way ahead of the offensive line. It’s worth noting the caliber of talent on defense, which makes truly evaluating the offensive line much tougher. The preseason is the best time to evaluate the position in detail.

Brian O’Neill lost multiple reps to Danielle Hunter, but also put together a few strong respectable reps on the next couple plays. There are still inconsistences with O’Neill as he learns the position. During 1-on-1 drills, Jalyn Holmes beat him with a nasty spin move. Holmes was showing off his pass rushing skills during numerous portions of practice. He used a long-arm jab and speed to power to beat O’Neill during another 1-on-1 rep. Holmes also had a notable pressure during one of the team drills, too. A few days ago, Mike Zimmer discussed how Holmes was still learning and that his stance was too wide when he arrived to camp. This afternoon was a glimpse of the potential associated with his size, length and athleticism inside.

Sticking with the defensive line, I was zoning in on Sheldon Richardson during the team drills. He blew up a Latavius Murray run to the edge, dominating the rep by showing off his quickness and subtle power. In the 1-on-1 drills, you can see how fast he can get off the ball. He beat Danny Isidora with a nasty spin move and won all of his reps with ease. You can see not only his value as a pass rusher, but against the run, too. Richardson is always working before practice with assistant defensive line coach Rob Rodriguez on his hand technique and footwork. This is arguably the best situation Richardson has been placed within during his NFL career. The level of coaching has the chance to take all of his unique ability and turn it into something special.

Ifeadi Odenigbo also won all of his 1-on-1 reps and has been very disruptive at defensive tackle during team drills. Odenigbo has outperformed David Parry, who was signed as a veteran defensive tackle in late May.

In the same drill, tackle Storm Norton put together a few positive reps. He stopped Brian Robison twice with a great anchor and received praise from the coaches for his work. Norton is someone who has improved his technique drastically. He has impressive size and power, but his footwork has been a problem in the past. Norton has potential and should be monitored closely during the preseason slate. Another player who I was watching closely in the second and third team units was Josh Andrews. He opened some nice lanes during the rushing periods and split reps in the 1-on-1 drills. The Vikings signed Andrews this offseason after he spent time between the active roster and practice squad in Philadelphia. You can definitely see his movement skills on display when he is asked to drive into the second level. It’s an excellent fit for what the Vikings are looking to do from a blocking scheme standpoint.

In addition, when the Vikings used a fullback, C.J. Ham was showing his value. Two of his blocks in the hole opened nice rushing lanes for the running backs. His versatility and improved ability as a blocker have helped him carve out an important role in Minnesota.

The safeties showed what they could do in run support during Tuesday’s practice session. Anthony Harris appears to have bulked up and stood out when asked to defend the run. He blew up a play in a goal-line drill and had a notable pass breakup during a situational drill. Harris is evolving and becoming more diverse as a player, particularly in regard to his overall physicality. In addition, Tray Matthews laid a nice hit on running back Roc Thomas to notch a run stop during the goal-line session. Matthews has displayed this physical ability in the past, but must be tested in coverage more during camp and the preseason.

At cornerback, Trae Waynes had a fantastic day. He knocked away a Stefon Diggs route in the front corner of the end zone by breaking on the ball quickly. Waynes also broke up a deep Adam Thielen route by playing tight coverage and getting his hand into the passing lane. He was really standing out when asked to cover tightly in the 7-on-7, 11-on-11, and 1-on-1 drills. In addition to Waynes, Mike Hughes continues to impress. His transition quickness and footwork are so polished for a player with his experience. He can drop his hips and move in and out of his breaks so smoothly. When he is on the field, one could argue he is the fastest player out there. He showed off all of his technique to beautifully knock away a Kendall Wright out during a team drill. He swiveled his hips and extended his arm to notch the pass breakup. From being at all of the training camps with Mike Zimmer’s teams, Hughes is far ahead of the developmental curve in comparison to many past defensive backs like Trae Waynes and Xavier Rhodes.

Carlson misses a situational kick
During a 2-minute situational drill, the kicking team was called out to try a field goal on fourth down. Daniel Carlson missed the 35-yard field goal wide left, hitting the post. There wasn’t much kicking taking place in the afternoon session and Carlson received the lone team rep.

Diggs is extended by the Vikings
Stefon Diggs signed a five-year contract extension on Tuesday. This article lays out a few of the details.


Note: I'm traveling to Canton, OH to cover Pro Football Hall of Fame events. I will miss the next three camp sessions, but will be back for the remainder of camp beginning on Aug. 6. Stay tuned for plenty of Randy Moss content on both VC and my Twitter account.