Report: Vikings agree to an extension with WR Stefon Diggs 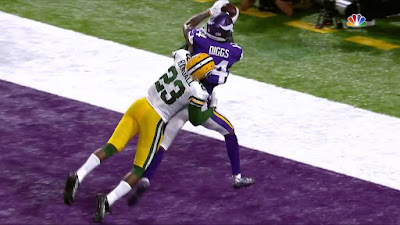 The Viking have reached a contract extension with wide receiver Stefon Diggs. Daniel House has the reported details and explains how the numbers fit within the cap.


The Vikings and wide receiver Stefon Diggs have agreed to a 5-year, $72 million with a maximum of $81 million. He will receive $40 million in guarantees and is under contract for the next six seasons.

Diggs, a fifth-round pick in 2015, has become one of the top route runners in the game and has the versatility to play in the slot or on the outside. Diggs has a 137.2 rating when he is targeted deep, per Pro Football Focus. His efficiency as a player, along with his ability to win contested catch battles make him a quarterback’s best friend.

If the Vikings’ front office follows past precedent, Diggs will earn $1.9 million in base salary before the extension begins in 2019. His per year hit lines up well with what I wrote in a piece discussing the cap landscape after Danielle Hunter’s extension.

The structure of these deals have spread the money out and helped the Vikings fit contracts together. It’s clear how much they planned for extensions to ensure they could retain their main core. Now, the attention will shift to extending linebacker Anthony Barr, who is next on the front office’s list. Barr could receive just over $13 million per year to fit within the current cap landscape. Diggs’ contract numbers lined up like many anticipated, so Barr’s contract can mesh within the cap well. I talked about it in this post.
Posted by Daniel House at 10:13 AM