From Rand to Canton, Randy Moss' journey was fueled by a single opportunity 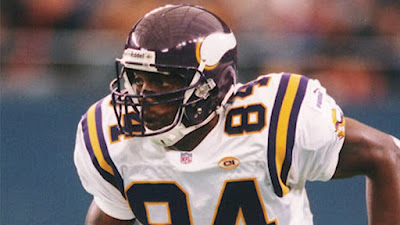 Randy Moss is set to be enshrined into the Pro Football Hall of Fame on Saturday night. A single opportunity helped one of the Vikings' all-time greats cement his legacy as one of the greatest to ever wear an NFL uniform.


Adversity and challenges have driven some of the most successful people to greatness. For many, the road to success isn’t easy and the destination is never planned. Sometimes all it takes is one opportunity. Former Vikings’ wide receiver Randy Moss is living proof that adversity can lead tough people to the top.

Moss’ journey started in Rand, West Virginia. He grew up in a single-parent home within a community plagued by racism and poor living conditions. The young wide receiver was determined to put the small town of 1,631 on the map.

As shown in an ESPN 30 for 30, Moss worked hard, overcame obstacles and put himself in a position to pursue a professional football career. However, it didn’t come without struggles along the way. Moss was dismissed from Florida State, served jail time for a marijuana violation and nearly lost his chance to show America a kid from Rand could overcome pressures and achieve their dreams.

Moss picked up the pieces at Marshall University by leading the Herd to an I-AA title. His success on the gridiron helped Marshall earn recognition as a Division I-A program. His leaping touchdown grabs, electrifying runs after the catch and pure athletic ability took the college football community by storm.

His past still loomed large on NFL draft night as Moss waited for his name to be called in 1998. General managers and coaches across the league were concerned Moss’ past would lead him down the wrong path. There was only one coach willing to take a chance on Moss. Vikings head coach Dennis Green gave the young receiver an opportunity to prove he was one of the rarest talents the game of football has ever witnessed. Moss’ 6-foot-4, 215-pound frame, 4.25 40-yard dash and 47-inch vertical at the Marshall Pro Day were enough for Green to pull the trigger. He knew if he mentored Moss, there was a chance he could achieve something special. The Vikings selected Moss with the 21st overall pick in the 1998 NFL Draft.

It didn’t take long for Green to realize he made the right choice.

Moss caught a pair of touchdowns in his NFL debut against the Buccaneers, on the road to one of the best statistical seasons by a rookie wide receiver in league history. In just a few games, Moss showed he could take a 4-yard hitch for an 80-yard touchdown or blow past the defense and stick his hand out for a long reception. Moss received national attention after posting an eye-popping, three catches for 163 yards and three touchdowns during a Thanksgiving Day game against Dallas. The only word announcer John Madden could use to describe Moss was “amazing.” It’s when the wide receiver truly took the league by storm.

As a rookie, Moss posted 17 touchdowns and 1,313 yards within one of the league’s top offenses of all-time. The “three-deep” trio of Randy Moss, Cris Carter and Jake Reed were nearly impossible to cover. Defenses quickly realized they couldn’t stop Moss without help over the top. Even with special scheme attention, it wasn’t a guarantee you’d slow him up. When Moss was in the huddle, he would infamously tell his quarterback to “throw it up.” He knew he could out run or leap any defensive back lined up across from him.

When looking into the history books, few names in the NFL have made an impact on the league more than Randy Moss. He changed the way defenses scheme and cover vertical playmakers because of his unique athletic ability. It’s why fans around the world called Moss, “Superfreak.” In an attempt to stop Moss, Packers General Manager Ron Wolf was forced to select defensive backs with the team’s first three picks in 1999.

It didn’t take long for everyone to realize the entire league made a big mistake. Moss was a superstar in the making.

During Moss’ career, there were very few teams he enjoyed playing against more than the rival Green Bay Packers. Moss tallied 73 receptions for 1,320 yards and 14 touchdowns in 15 career games versus Green Bay. He never posted more touchdowns or yards against another opponent. When the lights came on against the team’s rival, it felt like Moss took his game to the next level.

One of Moss’ most famous moments came after he posterized cornerback Al Harris in the 2004 Wild Card playoff game and “mooned” Packers fans in the end zone. He always found a way to make his presence known on the field. When his hair was down and the afro made an appearance, everyone knew what was about to happen -- Moss was going to take over.

When No. 84 took the field in his purple and gold jersey, everyone noticed. Fans, coaches, and the entire world were always watching. When the ball was tossed in Moss’ direction, fans in attendance collectivity rose to their feet. Very few players produced this type of reaction.

An infamous lateral to running back Moe Williams, a priceless Monday Night Football debut against the Packers and countless red zone touchdowns live in the mind of Vikings fans. Head coach Mike Tice even developed a philosophy called the “Randy Ratio.” He believed if the team could target Moss at least 40 percent of the time, great things would happen offensively.

On the other hand, Moss’ constant on-field talk and fiery personality rubbed some people the wrong way. It also got him into trouble more than a few times. “Straight cash homie,” an incident with a parking attendant, and an abrupt ending to his Minnesota return, were proof that Moss didn’t go about his business quietly. His personality often rubbed people the wrong way. He was traded to Oakland and spent four seasons in New England. Following a quick second stint with the Vikings, Moss closed out his career with short stints in San Francisco and Tennessee.

Now, a more reserved Moss currently serves as an NFL analyst on ESPN. This personality has been easy to see when watching him during enshrinement week. An outspoken, yet reserved Moss has tight-roped the spotlight his entire career. It was an odd dynamic many people couldn’t describe or figure out.

There were moments where Moss certainly made mistakes, but he also quietly made an impact on many people. Community gatherings or interactions were something Moss often didn’t want in the spotlight.

One of those moments happened to me when I was six years old. It was my second trip to Vikings training camp in 2003. As a young kid, my eyes were always big when I was around the likes of Daunte Culpepper and Randy Moss. One morning in Mankato at Vikings training camp, my dad was dropping my mom and I off on a street where all of the satellite trucks parked. We were on our way to training camp practice at Blakeslee stadium. I turned my head to the right and yelled, “Mom, it’s Randy Moss.” She responded, “no way, are you sure?” I was more than certain and politely said, “Randy, would you please sign my football?”

He looked around, didn’t see a single person, pulled over on his bike and motioned for me to go between two satellite trucks. “Come here, quick. What’s your name?” I remember being frozen like any another kid as I responded to him. He signed the ball as my mom and I both said thank you about six times. He smiled, signed the ball, shook my hand and said, “no problem, my pleasure. Ya'll have a great day.” My mom always told me I didn’t take my eyes off the football for weeks following that moment. Years later, this moment was the first thing I thought about when I sat down to write this article as a young journalist. It was a small gesture that many wouldn’t expect from Moss, who was very difficult to understand.

It’s just proof that Moss’ personality is often hard to describe. Many people close to him will tell you the same thing.

With all of that aside, there’s no doubting that very few players have transcended the game more than Randy Moss. He holds the single-season receiving record, boasts the highest yards per catch average of any player and posted the most 1,200-plus yard seasons to begin a career (six). He accomplished all of this despite playing with 20 different quarterbacks.

Now, as he stands on stage and joins America’s most storied team, Moss will be soaking up the moment. He was clearly humbled as he waved to fans who supported him at the Hall of Fame parade in Canton on Saturday morning.

The young kid from Rand, West Virginia didn’t become part of the mainstream statistics -- he defied the odds. As he stands in Canton, he’ll surely be thinking about the man who gave him a chance, the late Dennis Green.

Without his help, who knows if Moss would be standing on the steps of the world’s most historic and prestigious building.

When Moss delivers his speech in Canton on Saturday night, Green will certainly be watching from afar as the coach’s greatest success story is enshrined in the Pro Football Hall of Fame forever.