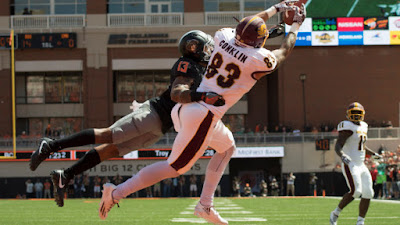 The Vikings traded up with the New York Jets (No. 157) to land Central Michigan tight end Tyler Conklin.

The Vikings traded up with the New York Jets (No. 157) to land Central Michigan tight end Tyler Conklin. A priority in the draft was to draft a tight end who can provide mismatches at all three levels. Conklin thinks he fits this profile well because of his position flexibility.

“I think it starts with my versatility,” Conklin said. “I think I’m a great route runner, though. I think I can run routes from every position on the field -- slot, out wide, in-line.”

A former college basketball player at Northwood University in the NAIA, Conklin transferred to Central Michigan to play football. A very gifted jumper (38-inch vertical) with reliable hands, Conklin quickly became a red zone weapon. His skills as a basketball player are something he believes help him as a tight end.

"[It] 100 percent [helps to play basketball]," Conklin said. "You know to judge the ball, ball skills, the way you can kind of use your body and just little stuff like that. Being able to kind of react out of nowhere, I think those are things that translate perfect."

He snatched 42 receptions for 560 yards and six touchdowns as a junior. He also posted more than 400 yards receiving in each of his final two seasons.

What stands out about Conklin the most is his ability to make contested catches in traffic. His ball skills and wide catch radius are very unique. Conklin made difficult grabs in the red zone all season, including numerous one-handed catches. He not only plays with body control and hauls in contested passes in traffic, but he is a serviceable in-line blocker, too. Conklin suffered a fracture in his foot which caused him to miss five games, however, he tested well. He was in high percentiles for the 60 and 20-yard shuttles, along with the vertical and broad jumps. This type of skill-set is something the Vikings can unleash in the red zone or on the outside. 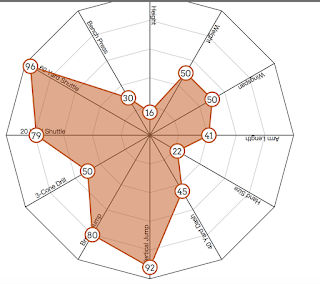 At 6-foot-3, he doesn't have massive length, but his wide catch radius is what really sets him apart from other prospects. His vertical and broad jump are metrics which really stand out.

He can likely be lined up all over the field in attempt to stretch the defense at all three levels. This is something that's necessary in the Vikings' offense, especially as offensive coordinator John DeFilippo takes over.