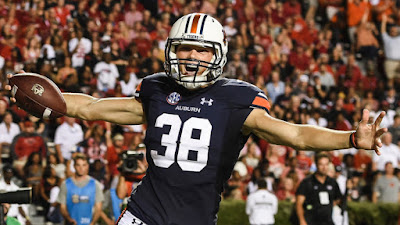 The Vikings initially traded out of the No. 167 selection before reacquiring the pick from the Jets. They made the move to select kicker Daniel Carlson out of Auburn.


The Vikings initially traded out of the No. 167 selection before reacquiring the pick from the Jets. They had their eyes on kicker Daniel Carlson out of Auburn, who was gaining additional interest from other teams.

Carlson set the SEC career points record last season and holds 14 kicking records at Auburn. He made 23-of-31 field goal attempts in 2017, going 4-of-8 from 50-plus yards (three of those blocked). Carlson has been praised for his ability to kick touchbacks, booting 156-of-222 attempts out of the back of the end zone. His kicking percentage dropped ten percent during his senior year, but a few of those misses were the result of blocked kicks.

"I feel confident from 60 and in. And then from 65 and in from an indoor setting," Carlson said.

Carlson has even made kicks from 75 yards out in the altitude of Colorado, where he has been working out leading up to the draft.

Carlson drew plenty of interest in the pre-draft interest process, including visits with four other teams. According to Carlson, the Dolphins, Seahawks, Giants and Bengals all worked him out leading up to the draft.

Physically, he measures in a 6-foot-5, 213 pounds and will be one of the tallest kickers in the league. From a physics standpoint, it's something the kicker has investigated over the years.

"It's not always typical kicker body build I guess, but there are advantages of having longer levers," Carlson said. "Different sports where having a longer club or whatever it is, you get more force just by simple physics to what you're hitting or kicking, whatever it is."

Many analysts widely considered him the best special teams player in the draft. He made all of his kicks at the Combine, impressing teams with his workout. Carlson visited with the Vikings during the draft process and special teams coordinator Mike Priefer liked his fit in Minnesota. Priefer worked Carlson out privately both at the Combine and in Auburn.

"It was probably my favorite workout, honestly. He has so much knowledge about the kicking game," Carlson said. "I definitely really like him as a coach and just as a person."