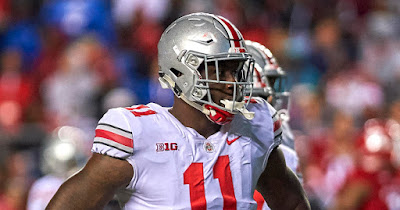 The Vikings selected Ohio State defensive end Jalyn Holmes with the No. 102 pick in the NFL Draft.


The Vikings selected Ohio State defensive end Jalyn Holmes with the No. 102 pick in the NFL Draft. Holmes started nine games during his senior season, accumulating three sacks and 29 total tackles. He could play either inside or out on the defensive line, moving to the interior for nickel packages as a three-techniue.

At 6-foot-5, 283 pounds, Holmes has length and room to add more mass. He will need to be polished as a pass rusher, which is something that can happen under defensive line coach Andre Patterson. Holmes met with Patterson at the Combine and Pro Day. The defensive line coach even ran the on-field drills for the position groups during Ohio State's pro day. Patterson certainly had plenty of interaction with the young pass rusher to see his skill-set in person.


“I think I could be [a three-technique] for the Vikings," Holmes said. "I can be whatever the Vikings need me to be, honestly. I played defensive end the majority of the time and then the last two years I was kicked inside on third downs."

Holmes was lost in a deep defensive line room in Ohio State with so many draft eligible prospects in the program. He played in major bowl games, including a National Championship, Fiesta, Cotton and Sugar Bowl. This type of experience with a deep defensive line unit has helped Holmes learn how to play a competitive brand of football.

He has the speed, length and power, but will need to be refined. I see him potentially being a player the Vikings can use in sub-packages because of his unique skill-set. He is in-between when it comes to size, which may cause him to rotate between the edge and interior.

Here's what Matt Miller had to say about the pick:

Jalyn Holmes might be seen as a potential project to move inside once in an NFL defense, but he's listed as an edge defender now since that was his primary role at Ohio State. His size, quickness and hand use make him a sleeper starter as a rookie.

This is a very accurate assessment and Holmes may be able to develop because he was lost in the shadows of Nick Bosa, who took over much of his role in 2017.


A player who can rush off the edge or inside via sub-packages, Jalyn Holmes is a pass rusher the #Vikings can move around and use in creative ways. Untapped potential for Andre Patterson to coach up. pic.twitter.com/eI1IqNAZth
— Daniel House (@DanielHouseNFL) April 28, 2018


In Minnesota, he'll rotate frequently, which is something Mike Zimmer has stressed is necessary in 2018. Based upon his experience at Ohio State, Holmes believes this approach can be beneficial for his new team.


“We did it at Ohio State actually the last two years and it helped us – it helped us a lot. Being able to rotate seven, eight guys who can really play in the game and I feel like that helps starters for the fourth quarter. It really helps the defense. You get new, fresh legs to rush the quarterback.”