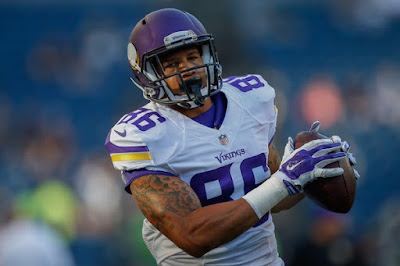 Vikings tight end Kyle Carter has been rising up the depth chart in training camp. Find out how Carter has developed more versatility and consistency this season.

Tight end Kyle Carter has been rising up the depth chart in training camp. As an undrafted rookie out of Penn State in 2016, the 6-foot-3, 245-pound tight end spent last season on the Vikings’ practice squad. In recent training camp practices, Carter has performed positively as both a run blocker and pass catcher. In fact, he earned first-team snaps in the heavy packages during the Saturday night practice.

This year, the big focus for Carter has been on run blocking. A heavy emphasis has been placed upon it during positional work. It was an area Carter knew he must improve as he transitioned into his second season in the league.

“I worked on [run blocking] a fair amount,” Carter said. “I knew that was one thing that the Vikings wanted me to prove to them that I could do. Just making my game more balanced.”

Tight ends coach Clancy Barone joined the Vikings after coaching the offensive line and tight ends in Denver for seven seasons. His attention to the details of run blocking from his prior experience as an offensive line coach has added increased instruction to the tight end group. Barone also has a pedigree of developing tight ends, including the likes of Alge Crumpler, Antonio Gates, and Julius Thomas. Carter has been impressed with Barone’s coaching style and attention to detail.

“I feel like he’s getting us more of the different technique details when it comes to blocking and I feel like it’s working for us,” Carter said. “If we can run the ball, we will be able to pass the ball better and just be a better overall offense,” he added.

In 2015, Carter had just 30 catches over his final 18 games at Penn State, but his pass catching skills are clearly the biggest asset of his game. He was exposed to a pro-style system under head coach Bill O’Brien, which helped him learn the terminology necessary to be successful in the NFL. In addition, Carter said O’Brien instilled an NFL environment within his players at Penn State. It's helped Carter understand the rigors of football at the professional level.

“[O’Brien] came in with an NFL mindset for all of us as a college team. We knew to get things done, we would just learn how to do it the right way.”

Carter learned a completely new offensive system when O’Brien left for the Houston Texans in 2014. His exposure to multiple offensive philosophies taught him new concepts he is still using at the NFL level. Last year in training camp, Carter attracted enough attention from the Vikings’ coaching staff to earn a practice squad spot. He used the opportunity to continue refining his game, while striving to develop more versatility.

“I feel like versatility as a tight end is the biggest thing,” he said. “I feel like I had a great foundation last year of showing them what I could do, but being able to improve on run blocking and route running and all of that definitely helped.”

The young tight end has been watching the way veteran Kyle Rudolph has been handling himself as a player and professional. He hopes to emulate some of his characteristics as he enters another stage of his career.

“Rudy is a first-class teammate,” he said. “[Rudolph] definitely has helped us a lot with technique and tips. He just does everything the right way and is a good guy to look up to.”

Carter has been performing well in practice, but the preseason and his contributions on special teams will ultimately dictate his future on the team. He noted he has learned the importance of the unit from special team coordinator Mike Priefer.

“To be good on special teams, you just have to be a smart football player and understand different situations and how things work,” he said. “You can’t just know offense or defense.”

No matter what, Carter is feeling more comfortable during his second training camp in the NFL. He now understands what is takes to play in the league by lining up against some of the top competition every day in practice.

“I feel like coming into this one I’m a lot more confident,” he said. “It definitely feels easier this season. Last year, just going against B-Rob, Everson, and Danielle every day in practice was definitely big for me. I just got to learn how the pros handle a season.”

Carter has been focusing on the details of his game, but it hasn’t changed his philosophy as a player.

“I pride myself on always trying to be in the right spot, doing the right thing and just executing my responsibility.”