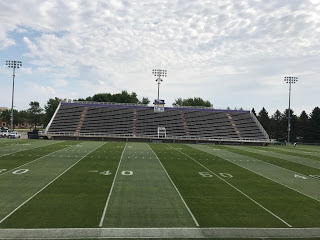 The Vikings took the practice field for their second-to-last afternoon practice before closing camp Tuesday. Daniel House takes you inside his training camp notebook!

The Vikings took the practice field for their second-to-last afternoon practice before closing camp Tuesday. During Monday's practice, running back Dalvin Cook got the crowd going and quarterback Sam Bradford found his favorite targets.

For more, take a dive inside my training camp notebook:

Bradford finding his favorite targets
The highlight of the day came when quarterback Sam Bradford found wide receiver Stefon Diggs in the back right corner of the end zone. Waynes was face guarding Diggs, who snatched the pass beautifully outside his frame. Diggs practiced his end zone celebration by spinning the football and swiveling his hips. The pass was perfectly placed, but slid between Waynes, who didn’t have his hands extended to knock the pass away. Earlier in practice, Bradford showed incredible touch on a corner route to Adam Thielen, who made a great contested grab with cornerback Mack Alexander draped all over him. Bradford continues to throw with accuracy and touch down the field, showing off his downfield arm talent.

Quarterback Taylor Heinicke struggled more with deep throws down the field. He overshot Michael Floyd, who had a step on cornerback Marcus Sherels. Floyd ran a fade and Heinicke couldn’t deliver the pass between Sherels and safety Anthony Harris. He also was unable to connect with wide receiver Cayleb Jones, who had a step on cornerback Sam Brown down the right sideline. Finally, later in practice, Heinicke forced a crosser to wide receiver Stacy Coley and it was intercepted by linebacker Edmond Robinson.

Cook gets the crowd going
Running back Dalvin Cook got the crowd going after he burst through a nice hole up the middle. Cook accelerated through the crease and into the second level for what would have been a long touchdown run. He also showed incredible burst and a strong cutback after hauling in a reception in the flat. Cook added a strong pass protection rep on linebacker Anthony Barr to allow quarterback Sam Bradford a split-second of additional time.

Fullback C.J. Ham picked up an Anthony Barr blitz and delivered a great block on linebacker Edmond Robinson to open up a run between the tackles for Dalvin Cook. Ham has been progressing throughout camp and is executing more when blitzers are sent downhill.

Diggs and Thielen make highlight grabs
Wide receivers Stefon Diggs and Adam Thielen stole the show at practice. Diggs made a fantastic grab in the back right corner of the end zone on Trae Waynes and snatched another corner route earlier in practice between Waynes and Harrison Smith.

Thielen made a contested grab off a great corner route on cornerback Mackensie Alexander. He caught the pass with Alexander face guarding him through the catch point. The route running of Diggs and Thielen in camp has really been impressive. They are so smooth in and out of their breaks and track the ball well after completing their route. The duo of Diggs and Thielen, along with big-bodied targets Michael Floyd and Laquon Treadwell should improve the Vikings’ red zone attack. Treadwell missed practice again, but Floyd made a highlight grab as he adjusted to a pass with Terrell Sinkfield battling him at the catch point.

Wide receiver Isaac Fruechte had two drops in the DB/WR drills. He couldn’t look in a comeback and dropped a fade up the left sideline. He also had trouble tracking a crosser after getting a step on cornerback Terrell Sinkfield.

Truesdell is an athletic target
Tight end Nick Truesdell made a grab in the flat and showed his athleticism in space by accelerating through defenders up the right sideline. Truesdell has a big catch radius and can track the ball into his frame well. It is clear to see his previous experience as a wide receiver has aided his pass catching ability.

In a team drill, tight end Kyle Rudolph laid a great block on Ifeadi Odenigbo to fuel an inside run by running back Jerick McKinnon. Rudolph drove Odenigbo back and washed him out of the play. This is an area of Rudolph’s skill-set he needed to improve and it has looked better in camp.

Rookies continue shuffling on the offensive line, Reiff puts on pads
Left tackle Riley Reiff returned to practice after missing the last 12 days with back tightness. He didn’t participate in team drills, but returned to the field for positional work.

The offensive line continued to rotate young players into the mix on a consistent basis. Center Pat Elflein took several reps with the first-team and right guard Danny Isidora also rotated into the group. Elflein also took snaps at guard with the second-team unit. Elflein had a strong day, delivering a great block in the second level to spark a reception by running back Bishop Sankey in the flat. He also won two reps against defensive tackle Will Sutton in 1-on-1 drills. Elflein has shown how valuable he can be as a run blocker. He finishes to the whistle on a consistent basis and plays very physical. As a whole, the interior of the offensive line has been performing well. Guard Alex Boone has been opening up lanes on the left side with left tackle Rashod Hill. Boone saw less snaps Monday, but maximized his time on the field. Both Hill and Boone have been very effective as run blockers, along with right tackle Mike Remmers, who is one of the better run blockers in the offensive line room.

In pass protection, left tackle Rashod Hill struggled with defensive end Danielle Hunter and allowed numerous pressures during team drills. Hill was less consistent Monday and it was noticeable during both team work and 1-on-1 drills. On the other side, right tackle Mike Remmers might have put together his best day as a pass protector. There were far less pressures coming off the edge than in days past. However, there are still lapses where he will lose very badly. He was squaring off with veteran Brian Robison for most of the day, after Everson Griffen left the field with trainers, and returned, but didn’t participate. Mike Zimmer said after practice that Griffen “just tweaked something” and could have returned to practice.

During 1-on-1 drills, guard Zac Kerin won two reps against defensive tackle Chunky Clements. He has been really effective as a pulling guard in team drills, too. Kerin has put together a rather solid camp, but hasn’t seen as many reps after the addition of rookie Danny Isidora.

For the first time this camp, left tackle Aviante Collins won two reps versus defensive end Tashawn Bower. Collins has struggled throughout camp, but held up better in 1-on-1 drills Monday. He has really struggled to handle long-arms jabs and power rushes during practices.

Defensive end Ifeadi Odenigbo destroyed Willie Beavers twice in 1-on-1 drills and left Reid Fragel in the dust during a team session. Odenigbo has been playing against low-tier talent, but has really shown potential throughout camp. He has been evolving as a pass rusher by adding more pass rushing moves to his arsenal.

Defensive tackle Jaleel Johnson has shown flashes against the run throughout camp. He beat T.J. Clemmings with a power move to stop a Bishop Sankey play in the backfield. Johnson hasn’t been standing out much as a pass rusher, but has made numerous plays against the run in practice. Shamar Stephen also had a notable run stuff on a Jerick McKinnon inside run. He continues to perform well during camp.

Defensive tackle Dylan Bradley always has one play every practice where he blows up an offensive lineman. On Monday, he beat guard Austin Shepherd with a power move to stop a C.J. Ham run at the line of scrimmage.

Gedeon tested in coverage
Linebacker Ben Gedeon was tested in coverage during 4-on-4 drills. He stopped a Terrell Newby route in the flat and created a pass breakup near the sideline against tight end David Morgan. Gedeon continues to rotate at the linebacker position and has been showing progress in coverage with more reps. He already provides value against the run because of his instincts and ability to shed blockers. The key for Gedeon will be how he plays in zone coverage and executes his responsibilies against the pass.

Linebacker Edmond Robinson intercepted a Taylor Heinicke pass intended for Stacy Coley across the middle. Robinson also had two notable plays against the run in team drills. The race continues for the weakside linebacker spot, but Robinson has made more overall plays in camp than Lamur.

Richardson and Roberson stand out
Cornerback Trae Waynes has been in position to make plays, but only closes on a few of them. For example, he had Stacy Coley on his hip during a corner route, but was unable to get his hand in the passing lane. Later in practice, Stefon Diggs caught a touchdown in the back corner of the end zone and Waynes was unable to get his hands up to knock the pass away. He appears to be getting better from a footwork standpoint, but his ball skills have stood out over the last few practices.

Cornerback Horace Richardson saw a few snaps at nickel cornerback with the second-team. He beautifully knocked away an out route intended for Isaac Fruechte by dropping his hips and reaching across Fruechte for a pass breakup. Richardson has shown flashes of potential throughout camp and may be a developmental practice squad candidate.

Cornerback Tre Roberson had two pass breakups, including one against wide receiver Rodney Adams on an out. Roberson hasn’t struggled to cover intermediate routes, but has been exposed when wide receivers run vertical routes against him. He has been unable to adequately handle double moves.