Day 12 Training Camp Notebook: One final night under the lights in Mankato 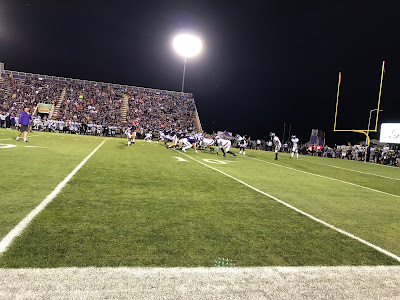 The Vikings took the field in front of over 10,500 fans as they practiced under the lights for the final time at Blakeslee Stadium. Daniel House takes you inside his training camp notebook.


The Vikings took the field in front of over 10,500 fans as they practiced under the lights for the final time at Blakeslee Stadium. In 2018, Minnesota will move training camp to their new team headquarters in Eagan, ending a 52-year run in Mankato. The team held a ceremony to honor the city of Mankato and presented a number 52 "Mankato" jersey. Former wide receiver Ahmad Rashad also took the field with 22 other former Vikings to reflect upon Mankato memories. After the fanfare, the Vikings took the field for a practice that featured a high amount of team drills.

For more, take a dive inside my training camp notebook:


Bradford putting on a show
Quarterback Sam Bradford was sharp during the night practice in Mankato. He was throwing passes into tight windows across the field. Bradford perfectly placed a pass to Jarius Wright on a crosser. He fit the throw just over the outstretched arms of linebacker Anthony Barr, who perfectly blanketed Wright. Later in practice, wide receiver Stefon Diggs ran a perfect fade on cornerback Xavier Rhodes and Bradford hit him in stride for a touchdown. The 50-yard score was the highlight of the night for the 10,500 fans in attendance. His touch, accuracy, and placement on the intermediate and deep passes have been very impressive in camp.

Quarterbacks Case Keenum and Taylor Heinicke were less impressive Saturday night. Keenum continued to be more effective in red zone situations, finding tight end Bucky Hodges for a touchdown in the end zone. He still stuggles when throwing the ball down the field and overshot a fade intended for wide receiver Isaac Fruechte up the sideline. Heinicke missed an open receiver on a corner route and sailed the pass over their head. He wasn’t nearly as sharp in the night practice and the timing appeared to be a bit off for both of the quarterbacks. However, Sam Bradford was dynamite under the lights.

Sankey turns some heads
Running back Bishop Sankey made some noise during the night practice. He delivered a smooth cutback in the second level, freezing a linebacker in their shoes. Sankey had numerous runs where he was patient and used his vision to make a cutback in the second level. He also caught a checkdown and accelerated for a nice gain. Sankey received more reps during the night practice and took advantage of them by popping off several strong runs and receptions.

Running back Dalvin Cook had a great pass protection rep, chipping safety Harrison Smith, who came downhill on a safety blitz. Cook ran well out of the shotgun and showed his strong cutbacks and vision. There were several instances where he slipped and struggled with footing, but several other players were, too.

Diggs gets the fans excited
Wide receiver Stefon Diggs stole the show and continues to display how special his season could be if he stays healthy. He ran a beautiful corner route between cornerback Trae Waynes and safety Harrison Smith. Diggs also got the crowd fired up after he hauled in a 50-yard fade against cornerback Xavier Rhodes. He is on another level when he steps onto the field and runs routes. His crisp footwork and smooth speed freeze defensive backs every time he comes in and out of his breaks.

During a team period, wide receiver Isaac Fruechte hauled in a fade over cornerback Sam Brown. He also made several other notable grabs throughout practice, including a smooth quick slant against cornerback Horace Richardson. Fruechte has splashed throughout camp and plays an integral role on special teams, which will significantly help his chances of cracking a roster spot.

Wide receiver Rodney Adams had his best practice of training camp under the lights. He nearly hauled in an acrobatic grab with safety Anthony Harris draped all over him in the end zone. Harris managed to strip the ball out of his arms at the last second. However, a few plays later, Adams won with a beautiful corner route on safety Jayron Kearse. Adams did have one bad drop on a crosser, but was getting more separation from his routes. More importantly, he was tracking punts and kicks better and showed nice burst during the punt return drill at the end of practice.

Wide receiver Cayleb Jones continues to show flashes during practices. He ran a beautiful post route and had yards of separation on cornerback Sam Brown. Jones needs to put together a strong preseason and a string of consistent practices to improve his chances.

Carter seeing more action, Morgan catches a touchdown
During the multi-tight end sets early in practice, Kyle Carter was working with the first-team. Carter has been performing well over the last three days of practice and must have earned more playing time in the process.

Tight end Bucky Hodges had a five-yard touchdown in a red zone drill and hauled in a nice crosser against linebacker Edmond Robinson. Hodges lost a pass protection rep to defensive end Ifeadi Odenigbo and is still working on this area of his game.

Tight end David Morgan hauled in a red zone touchdown during a situational drill. Quarterback Sam Bradford rolled out off a play-action look and found Morgan wide-open in the back of the end zone. Morgan continues to add so much to the running game because of his above average run blocking skills.

Remmers plowing running lanes
Offensive tackle Mike Remmers delivered a great block on defensive end Danielle Hunter to spark a Dalvin Cook red zone touchdown. He was opening up holes between the tackles and setting the edge for runs throughout practice. However, he had several lapses in pass protection. He lost to Everson Griffen on numerous occasions, forcing Sam Bradford to scramble two consecutive times in a team drill.

There was a small scare when left tackle Rashod Hill went down in practice. He left practice on a cart, but later returned to the sideline under his own power. Hill has been an integral player on the offensive line in training camp and is making strides every day. In his absence, Jeremiah Sirles struggled. He lost two reps to Danielle Hunter and continues to project more as a guard because of his agility deficiency.

Center Nick Easton saw the majority of reps at center with the first-team, but rookie Pat Elflein displayed positive reps during the red zone drill. He earned praise for delivering a strong block into the second level to spark a Jerick McKinnon run. Nonetheless, Easton has held up well in both pass protection and run blocking. The preseason will provide more clarity, but the amount of reps Easton received likely means the coaches want to take a long look at him with the first-team. In addition, at certain points of practice, Elflein played left guard with the second-team unit. This week, offensive coordinator Pat Shurmur indicated the centers will receive work at guard to increase their versatility.

Defensive tackle Shamar Stephen beat guard Danny Isidora for a run stop and caused a quarterback pressure later in practice. Stephen has been more versatile as a run stuffer and pass rusher during training camp. He and Tom Johnson were rock solid inside. In addition, defensive ends Danielle Hunter and Everson Griffen are playing at a very high level. They are causing frequent disruptions and Hunter appears to be performing better against the run this year.

Defensive tackle Jaleel Johnson was getting consistent inside pressure during the red zone work. He forced several runs outside, which led to run stops by linebackers Ben Gedeon and Eric Wilson.

The weakside linebacker battle is wide-open
The weakside linebacker spot is still wide-open for the taking. Linebackers Ben Gedeon, Emmanuel Lamur, and Edmond Robinson continue to rotate at the positon. Robinson had several notable runs stops and was instinctive to react on passing plays in the flat. On the other hand, Ben Gedeon pulled off of a block and made a run stop on a Bishop Sankey run in the red zone. He continues to show how reliable he is as a run defender. Ultimately, more clarity will be provided in the preseason as these players receive more in-game reps.

Linebacker Darnell Sankey delivered one of the biggest hits of practice, popping running back Terrell Newby. He squared up in the gap and burst forward for a strong stop. Sankey pulled off of a block and made the play.

Waynes notches a few pass breakups
Cornerback Trae Waynes had a rather strong performance during the night practice. He started the night with a great tackle in the flat on a dump to tight end Kyle Rudolph. Later in practice, he used his speed to pick up a pass breakup as wide receiver Stefon Diggs snapped off a corner route. Waynes loses a few reps vertically, but is limiting the overall amount of times they occur.

Cornerback Xavier Rhodes had a pass breakup on a Jarius Wright corner route, diving to knock the pass away. Rhodes has been all over wide receivers in practice and had at least two pass breakups in this practice.

Cornerback Mackensie Alexander was called for holding on a Jarius Wright corner route in the red zone. For the most part, Alexander held up well, but still has moments where he reverts back to old habits.

Cornerback Terence Newman didn’t see many reps Saturday night, but saw a few snaps at safety in the nickel package. Newman will provide veteran insurance and versatility in the event it’s needed in the secondary.