Morning Notes: Zimmer is ready to see the offense in Buffalo 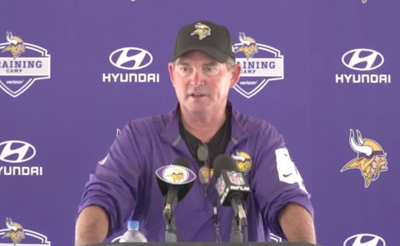 Vikings head coach Mike Zimmer spoke with the media before the team held its final afternoon practice of training camp. Daniel House has all of the morning notes!

Vikings head coach Mike Zimmer spoke with the media before the team held its final afternoon practice of training camp. Zimmer said the team has made progress during the last two weeks and he’s thankful for the partnership the team had with Minnesota-State, Mankato over the last 52 years.

“Minnesota State has been phenomenal in the four years I’ve been here,” he said. “The fans have been amazing. I think our players really appreciate all the aspects of it.”

Zimmer has been focused on teaching his players how to handle situations throughout camp. He said the preparation and execution from the team has yielded positive results during their stint in Mankato.

“The players have been outstanding as far as being on time and doing the things they are supposed to do,” he said. “Being involved in all the situational stuff we’ve done and also the meetings. I think it’s been very productive.”

The Vikings will travel to Buffalo for a preseason game Thursday and Zimmer is looking forward to seeing his players line up against different team. He noted the offense in particular has been exploring different concepts and wrinkles. Thursday night will be the first opportunity to evaluate how they are progressing as a unit.

“The defensive guys have been together,” he said. “We probably could have played a game three or four days ago. Offensively, we’ve been kind of working with the system and exploring some different options and things. I think for them it will be good to go against someone else, especially offensively to kind of gauge where we’re at.”

The coaches have a plan for how long they’ll keep the three units on the field and Zimmer indicated they may have certain players on the field more. The goal is to evaluate different players and combinations.

“We’ll have some guys play a little bit longer,” he said. “When the first group goes out, maybe we’ll keep some other guys in and maybe look at some different combinations of things.”

The team often used the Wildcat formation with running backs Jerick McKinnon and Matt Asiata last season. Zimmer said the formation works when you have running backs that can maximize its potential. There’s no doubting it was one of the team’s more effective running packages last year.

“[The Wildcat] helped us in a lot of things. It’s another thing the defense has to prepare for,” he said. “If you’ve got some guys in there that can do it, then it’s good. It’s a changeup. it’s like anything else, it’s not going to be your mainstay of what you’re going to do.”

Running back Latavius Murray returned to practice Monday, but was limited to individual drills. Zimmer said he isn’t concerned about Murray being ready for the first regular season game as he recovers from ankle surgery.

“He only did individual drills yesterday,” he said. “He’ll do a little bit more today and then we’ll just kind of gauge where he’s at. There’s no issue for him being ready for the first game.”

Quarterbacks Case Keenum and Taylor Heinicke have been rotating throughout the training camp practices as they battle for the backup spot. Zimmer said neither player has separated themselves and the preseason will likely dictate who earns the role.

“I think these games will determine,” Zimmer said. “We’ll get a good amount of seeing them this week and the next week probably.”