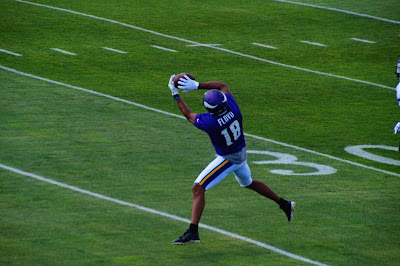 The intensity picked up during the second full-squad practice of Vikings training camp. Daniel House highlights the top performers in his notebook!

The intensity picked up during the second full-squad practice of Vikings training camp. The team focused more on situational work and 1-on-1 work between the wide receivers and defensive backs. It allowed several pass catchers to stand out during the afternoon session.

Find out more inside my day five training camp notebook:

Bradford looking comfortable in the pocket
Quarterback Sam Bradford looked sharp in his second training camp practice. He was moving well in the pocket to push the ball down the field with accuracy. He fit several throws into tight windows, including a corner-post to Adam Thielen with cornerback Mackensie Alexander draped all over him. Bradford also threw a beautiful out to Stefon Diggs, who was blanketed by cornerback Trae Waynes. The throw was delivered with excellent anticipation and timing. He appears to have as high amount of confidence it showed during every drill. Bradford hasn't been afraid to sling the ball into traffic during team drills.

Quarterback Taylor Heinicke continues to throws passes accurately into tight windows. In a 4-on-4 drill, Heinicke found tight end Bucky Hodges on a corner-post. He delivered the pass into traffic and Hodges tracked it into his frame over linebacker Eric Wilson. Earlier in practice, Heinicke found Michael Floyd off a double move, hitting him in stride. He continues to perform well and took reps between the second and third-team units.

Running backs tested in the passing game
The running backs were tested more in the passing game and rookie running back Dalvin Cook looked the part. He was comfortable on arrow and flat routes, tracking the ball into his frame. Cook caught the ball outside his frame and tucked the ball strong. After the catch, he shows his vision and ability to slither through tight creases. When gets to the edge, he has another gear with the ball in his hands. In addition, Cook can be a dynamic weapon out of the shotgun. On one run, he cutback beautifully on linebacker Eric Kendricks, bursting to the second level for a nice gain.

During the pass catching drills, fullback C.J. Ham was executing his responsibilities. He torched linebacker Emmanuel Lamur in the flat and created yardage after the catch. Ham also handled two blitzes during the team drills, setting a strong base and delivering a punch. He has been transitioning well to fullback and provides value as both a run blocker and pass catcher.

Treadwell winning against the “big dogs”
Wide receiver Laquon Treadwell had a great practice Friday, winning against every number one cornerback on the Vikings’ roster. He snapped off an out route to make a diving contested catch on Terence Newman. The veteran defensive back was in perfect position, but Treadwell won at the catch point. Later in practice, he hauled in another sideline with Trae Waynes all over him. Finally, Treadwell got open on a play-action quick slant with cornerback Xavier Rhodes covering him. The lone blemish for Treadwell was a concentration drop against Terence Newman. He won off a comeback, but couldn’t look the pass into his frame. One thing is certain: Treadwell is moving well in and out of his breaks and appears to be more comfortable getting open with a variety of routes.

In case you didn’t know it, wide receiver Michael Floyd is a big man. He also is fantastic at making contested grabs in traffic. Floyd’s ability to control his body, while winning at the catch point is impressive. Early in practice, Floyd put a double move on cornerback Tre Roberson and quarterback Taylor Heinicke hit him in stride. Floyd uses his body well to keep defenders on his hip when making plays across the middle. He displayed this on a quick slant across the middle, where he kept the cornerback perfectly on his hip to haul in the grab. Floyd has put together two strong practices and it’s clear he’ll be a vertical threat after he returns from his four-game suspension. His physicality and wide catch radius are two impressive attributes of his skill-set.

Hodges and his run blocking
Tight end Bucky Hodges had several positive reps as a run blocker, washing the defensive player out of the play. An emphasis has been placed on run blocking and Hodges has been showing strides in this area of his game. In addition, he ran a great corner route to haul in a reception during a 4-on-4 drill.

Tight end David Morgan has displayed strong run blocking skills and nearly hauled in a diving catch against Ben Gedeon across the middle. The tight ends are working hard on the fundamentals with new tight end coach Clancy Barone and it’s clear to see.

Remmers inconsistent as a pass protector
The Vikings were swapping Danielle Hunter and Everson Griffen between the right/left sides during practice. It was causing headaches for right tackle Mike Remmers. He would have one positive rep and the next two would be less impressive. He lost to Danielle Hunter on an inside power move and Everson Griffen defeated him with speed to his outside shoulder. In the running game, Remmers has been opening holes with Joe Berger on the right side. The big issue has been consistency in pass protection. However, he isn’t losing all the time and is squaring up against two of the best defensive ends in the game.

Right guard Alex Boone has been a rock on the left side. He has been executing all of his assignments and hasn’t allowed pressure in the passing game. More importantly, he has been opening up lanes in the running game for running back Dalvin Cook. He and Rashod Hill put together great performances Friday. Hill won a nice amount of his reps and continues to take advantage of the additional reps. His hand technique and strong base have allowed him to win the leverage battle against power rushers.

Reserve offensive tackle Reid Fragel put together several positive reps at right tackle with the third-team. He stonewalled Ifeadi Odenigbo, winning with a strong base and inside hand position.

Center Pat Elflein rotated into the starting center spot during the second half of practice. During his appearance, he had quality reps against Linval Joseph and Shamar Stephen. The center race is wide-open, but Nick Easton has performed surprisingly well during team drills, too.

The pads aren’t on yet, but the offensive line hasn’t been awful – just inconsistent. Remmers isn’t getting torched on every play, but he certainly isn’t perfect, either. It will be worth watching the entire offensive line as more 1-on-1 drills occur up front.

Griffen and Hunter are scary
Up front, the Vikings have so much talent to deploy. The idea of having Danielle Hunter and Everson Griffen on the field more consistently is a scary thought. He and Griffen were winning with a variety of moves in their pass rush arsenal. Griffen and Hunter won with a push-pull, spin move, and bull rush twice against Remmers and once versus Hill. The Vikings also had Brian Robison inside to rush the passer and he won twice against Joe Berger. The team can get ultra creative with how they get after the quarterback because of the talent and versatility on their defensive line.

Two young defensive lineman that keep bolstering their resumes are Tashawn Bower and Dylan Bradley. Bower had another tackle for loss and beat Austin Shepherd for a would-be sack in team drills. Bradley totally annihilated guard Freddie Tagaloa with a quick first step to get him off balance. He finished the move off with upper body acceleration through contact. These two young defensive lineman will likely continue to make their mark during padded 1-on-1 action over the next few days.

Lamur struggling in coverage
The Vikings had Edmond Robinson at weakside linebacker during the walkthrough and afternoon session Friday. He didn’t necessarily stand out, but his competition, Emmanuel Lamur had a tough day. Lamur lost on three occasions in pass coverage. He was beaten over the top as Stacy Coley snapped off a corner post route. Later in practice, he was a step late in the flat to cover fullback C.J. Ham. Lamur’s instincts aren’t on par and he doesn’t have the speed to compensate for it. On the other hand, linebacker Ben Gedeon executed two of his zone coverage responsibilities.

Gedeon might receive more reps as linebacker Kentrell Brothers went down with a leg injury Friday. Brothers got tangled up with fullback C.J. Ham and left the field on a cart. Gedeon took additional reps inside, while Eric Wilson manned the third-team unit inside. This injury could open the door for linebacker Elijah Lee, who had another strong day. Head coach Mike Zimmer indicated he can play all three spots and it’s something he might be asked to do more often if Brothers’ injury is significant.

Here's what I did see: cornerback Trae Waynes picked up a pass breakup on an out intended for Adam Thielen. Waynes has been performing well and his footwork has improved drastically. It will be interesting to see how his press coverage skills evolved this offseason. Mackensie Alexander wasn’t tested much in the nickel, but held up relatively well.

Later in the session, Marcus Sherels, beautifully batted away a Case Keenum pass intended for Cayleb Jones. In addition, safety Jack Tocho shut the door on a Nick Truesdell seam route. He swiveled his hips and stayed tight to Truesdell, tracking the ball to prevent a pass interference penalty. On the other hand, cornerback Tre Roberson has really struggled. He lost on two more double moves, including a deep completion to wide receiver Michael Floyd.