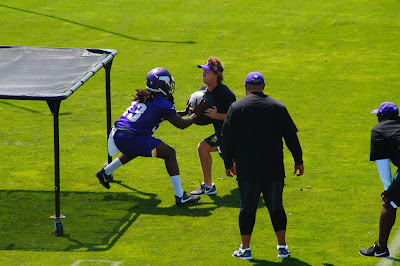 The Vikings held their first full-squad practice Thursday afternoon in front of a full crowd at Minnesota State University-Mankato. Daniel House takes you inside his day four training camp notebook.

The Vikings held their first full-squad practice Thursday afternoon in front of a full crowd at Minnesota State University-Mankato. The intensity was high during 1-on-1 drills between the wide receivers and defensive backs. In addition, the team drills allowed a few under-the-radar players to stand out.

For more, take a look inside my day four training camp notebook:

Bradford makes Vikings training camp debut
Quarterback Sam Bradford made his Vikings training camp debut during Thursday’s afternoon session. When he was asked to push the ball downfield, Bradford showed the touch and accuracy we have become accustomed to from him. He threw a beautiful touchdown pass in the back right of the end zone to wide receiver Jarius Wright. Bradford fit the pass into a tight window and Wright made a nice diving catch. Bradford wasn’t asked to throw many difficult passes in practice, but connected well down the field when necessary. Later in practice, he was intercepted by cornerback Mackensie Alexander in the flat. He forced the ball into a tight window and Alexander was right on Thielen’s hip to haul in the pass. However, Bradford didn’t have any major blemishes and is taking a leadership role with many of the young players on the roster.

Newby shows his elusiveness
Undrafted rookie running back Terrell Newby was very elusive between the tackles and notched four impressive runs where he used his vision to find open rushing lanes. He moves with nice lateral agility and can shake on defenders when he gets to the second level. Newly is very decisive, yet patient as a runner. He was also effective in the passing game and will be tough to bring down when he gets out in space.

Fullback C.J. Ham has been progressing during his transition to fullback. On Thursday, he did a great job of setting a strong base and delivering a punch as a lead blocker. In addition, he beautifully picked up a safety blitz in the team period. He has added more weight and the focus on fundamentals with running backs coach Kennedy Polamalu has been showing up on the field.

Running back Dalvin Cook continues to show his dynamic playmaking ability, but has also displayed a very strong work ethic. He has been early to every practice and puts in extra work on ball security and fundamentals with running backs coach Kennedy Polamalu. He also executed twice in pass protection during practice.

Running back Jerick McKinnon left practice early with an undisclosed injury and did not return.

Cayleb Jones makes a splash
If you read any of my content leading up to training camp, you’ll know I was impressed with big-bodied wide receiver Cayleb Jones. During Thursday’s afternoon session, he showed what he can do as a vertical playmaker. Jones made an excellent grab on a route up the seam between defensive backs Jack Tocho and Sam Brown. His ball tracking skills are above average and he wins with physicality at the catch point. Later in practice, Jones ran an impressive fly route to get open on Sam Brown, shielding the defensive back and hauling in the pass. He is getting open on a consistent basis and can stretch the field.

All eyes were on wide receiver Laquon Treadwell during his first training camp practice. He appeared to move better out of his breaks and nicely snapped off a comeback route on Harrison Smith in a 1-on-1 DB/WR drill. Treadwell is very sudden as a route runner, displaying explosion at the top of his breaks. There were certain portions of practice where this was less evident and he would plod or labor at the top of his route. However, he had a relatively small sample size of routes on Thursday.

Wide receiver Mortiz Böhringer had a moment of glory Thursday when he ran a post and nearly knocked safety Andrew Sendejo out of his shoes. He is showing improvements as a route runner, but consistency is still something he must develop.

Wide receiver Michael Floyd will be suspended for the first four games, but can practice with the team. Floyd stood out by winning twice on double moves. He had separation on cornerback Xavier Rhodes, but couldn’t make the diving grab. He also beat Mackensie Alexander with a nice head fake on a corner post. Floyd showed off his wide catch radius, grabbing passes outside of his frame throughout practice.

If it is even possible, wide receiver Adam Thielen might look even more explosive in and out of his breaks. He sets defensive backs up so well with his first step and overall crisp route tree. In a 1-on-1 drill, he faked hard inside and broke off his route to beat cornerback Trae Waynes to the sideline. Thielen got tangled up with cornerback Mackensie Alexander, but stayed after practice to work on the JUGS machine. It didn't appear to be anything serious.

Rashod Hill fills in for Riley Reiff
Left tackle Riley Reiff exited practice early with what head coach Mike Zimmer called a “twinge”during his post-practice interview with KFAN radio. His replacement, Rashod Hill took advantage of the extended reps. He has improved his hand technique and delivers a strong punch off the snap. Hill also picks his spot and uses his athleticism and length to win the leverage battle. He looks like he might have added more weight, which is helping him handle more powerful edge rushers.

Willie Beavers and T.J. Clemmings had consistency issues when squared up against Stephen Weatherly and Jaleel Johnson. Weatherly won twice with a quick power move and Johnson got inside to stop a running play. The Vikings have Beavers and Clemmings on the second-team unit at right guard and tackle. That could change as practices evolve, but it certainly is an interesting move.

However, we can’t truly assess the offensive lineman until more 1-on-1 takes place later in camp.

Bower makes noise
On the defensive line, the Vikings have so much talent to work with. On Thursday, defensive end Tashawn Bower had animpressive afternoon practice. In live contact, he would have sacked Taylor Heinicke before he completed a pass in the flat to Bucky Hodges. Bower also had a tackle for loss on a Terrell Newby run to the edge. He is starting to become more explosive and compact out of his stance, which will allow him to use his complete length and athleticism.

Defensive end Ifeadi Odenigbo caught my eye during a portion of team drills. He has an impressive blend of speed and power. More importantly, he has enough upper body strength to win with a push-pull or bull rush. He won Thursday with a strong push-pull against Aviante Collins. Odenigbo will be a player to keep an eye on throughout camp.

Mackensie Alexander picks off Bradford
Cornerback Mackensie Alexander was beaten twice by Adam Thielen and Stefon Diggs early in practice, but recovered later in the session. He knocked away an Isaac Fruechte out to the sideline by rotating his hips and making a play on the ball. Alexander was sinking his hips better and playing more physical as practice progressed. It allowed him to intercept a Sam Bradford pass intended for Adam Thielen in the flat. Alexander perfectly high-pointed the pass and made a difficult play on the ball. Alexander was gaining more confidence as practice progressed.

During a DB/WR drill, cornerback Trae Waynes was nearly beaten by Stefon Diggs, but accelerated at the last second to knock the pass away. It was an excellent play on the ball as Diggs had a few yards of cushion on him. Waynes had an up-and-down day, but also looked more comfortable as he received more reps.

In team drills, cornerback Terrell Sinkfield batted away a pass intended for Rodney Adams. He displayed impressive movement skills, swiveling and sinking his hips to make the play. Sinkfield’s technique has been continuing to evolve throughout camp and his skills as an athlete are aiding his transition from wide receiver to defensive back.

Safety Jayron Kearse had a great pass breakup on a Rodney Adams corner-post. He beautifully shifted his hips and made a physical play on the ball with Adams on his hip. Kearse displayed excellent footwork and ball skills to knock Case Keenum's pass away.