Morning Notes: Zimmer is ready to see his team in pads 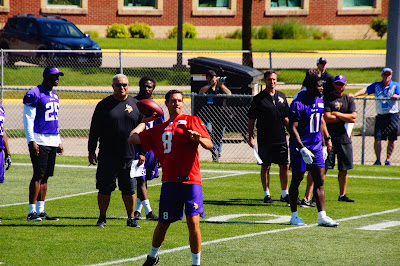 The Minnesota Vikings will take the field Saturday afternoon for their first full-padded practice of the 2017 season. Head coach Mike Zimmer is ready to see his team in pads.

The Minnesota Vikings will take the field Saturday afternoon for their first full-padded practice of the 2017 season. During his Saturday morning press conference, head coach Mike Zimmer indicated he is ready to see his team in pads. He believes it will be an opportunity to evaluate the players up front.

“Well, it’s mostly in the lines,” he said. “Some guys don’t run as fast when they are in pads as shorts.”

The team will continue building upon the concepts they installed over the first few days of camp. A major emphasis will be placed upon being in the right position on the field to make plays. Zimmer said the team won’t tackle on a consistent basis, but alignments will play an integral role in evaluating players.

“We’ve been a pretty decent tackling team, I think, so we’re not going to do a whole bunch of it,” Zimmer said. “It’s about being in the right position, mostly.”

The team will have a better chance to evaluate their running game, an aspect of the offense Zimmer feels will be key to success. This offseason, the team added two new offensive tackles and rookie running back Dalvin Cook to bolster the lackluster running game. The full-padded practices will be the team’s first look at several of the new additions.

“If we don’t run the ball good, we won’t be very good offensively,” Zimmer noted.

Early in camp, Zimmer has been impressed with what running back Dalvin Cook can do out of the backfield. He said he has been unable to see free agent signing Latavius Murray practice, but that Cook has performed well in his absence. Zimmer also noted fullback C.J. Ham will be tested as he transitions from running back to a new position. He wants to see how Ham handles more physicality as a blocker.

“[Ham will] have to take on Barr today a few times,” Zimmer said. “There’s going to be some collisions with him to see if he has the physicality to take care of it.”

Zimmer noted improving the offense and continuing to add quality players will help the Vikings chase a division title again. The growth of their defense will be a key foundation to competing with the rival Green Bay Packers.

“I think we’ve probably been the best defense in this division for at least three years now, so I think that’s a good start,” Zimmer said. “I think we continue to get better players. I think that’s part of it.”

The Vikings have been without left tackle Riley Reiff, who left the first full-squad practice with what Zimmer called a “twinge.” Zimmer doesn’t seem concerned about the injury, but has been impressed with second-year left tackle Rashod Hill during Reiff’s absence.

“He’s a very talented guy; long arms, huge size. He’s got to continue to progress with all of the communication things,” Zimmer said.

Before the morning walkthrough, the team announced the signing of linebacker Darnell Sankey. Sankey joins the Vikings after spending time with the Chiefs, Raiders, and Broncos last season. The team waived linebacker Shaan Washington, who started the season on the physically unable to perform list. Zimmer wasn’t concerned after linebacker Kentrell Brothers left Friday’s practice with an injury. He explained the signing will ultimately allow the Vikings to rotate their linebackers as camp progresses.

“We just need to get some linebackers in here,” Zimmer said.