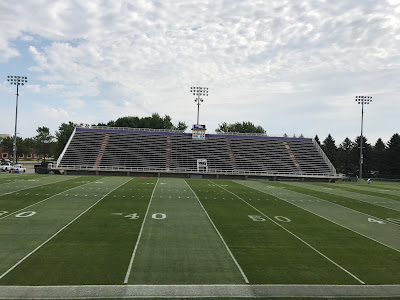 The Vikings took the practice field on a steamy day in Mankato as the rookies continued to learn concepts before the veterans report Wednesday afternoon. Daniel House gets you up to speed with the latest!

The Vikings took the practice field on a steamy day in Mankato as the rookies continued to learn concepts before the veterans report Wednesday afternoon. There were a few new observations, but practices will become more intense over the next few days.

Step inside my day two training camp notebook for the latest:

Keenum lacks arm strength
Quarterback Taylor Heinicke put together another strong practice on the second day of training camp. He continued to throw with accuracy and velocity to the sideline. He perfectly placed an out to Stacy Coley in a 4-on-4 passing drill. He is throwing with a tight spiral and touch to the sideline. More importantly, he is throwing with great anticipation and timing. In team drills, he tossed a tight spiral to RJ Shelton, hitting him in stride as he snapped off his route.

Quarterback Case Keenum had an improved day, but again struggled to throw the ball with arm strength down the field. He overshot RJ Shelton on a deep throw up the field. Shelton beat Tre Roberson with a strong head fake off a double move and had five yards of space to make the grab. Keenum was more accurate on short-to-intermediate throws, but plays inconsistent. It will be interesting to see how he handles more pressure because he has a tendency to hold the ball too long in the pocket. This was an issue when he was in St. Louis and it caused him to walk into sacks quite often.

Quarterback Wes Lunt hasn’t seen many reps, but forced one throw into double coverage that was nearly intercepted by cornerback Terrell Sinkfield. He had wide receiver Cayleb Jones open in the flat, but forced the throw into traffic. He also had a pass batted at the line of scrimmage by defensive tackle Chunky Clements in team drills. He has been low on the depth chart, but hasn’t taken advantage of his minimal reps.

C.J. Ham has added weight
I spent time with the running backs during position drills and kept a close eye on fullback C.J. Ham. He has transitioned to fullback and added more weight to his upper body frame. He stood out in run blocking drills and was receiving praise for his fundamentals. Ham won’t truly be tested until he is put on the pads, but it appears he has made strides this offseason during his position transition.

Böhringer gets praise from Zimmer
Wide receiver Mortiz Böhringer received positive words from head coach Mike Zimmer during Tuesday’s press conference. He said, “[Mortiz is] much improved. His routes are much better. He’s catching the ball better. He has a better understanding of the offense.”

On the first day, he showed signs of improvement, but struggled during certain portions of practice Tuesday. He dropped two passes in a drill emphasizing pass catching and explosion at the top of routes. He appeared to be focusing on his footwork, which was a problem last year. Böhringer also had trouble winning contested catch battles in traffic and doesn't consistently catch balls outside of his frame. I do believe he has an improved route tree, but Böhringer still has plenty of work to do. He has been receiving a significant amount of reps on coverage teams, which will be key for him.

RJ Shelton had another great day, beating Terrell Sinkfield on an out. He wins with his initial first step of explosion, which is something wide receivers coach Darrell Hazell has been preaching. He also uses leverage well to get position on the defensive back. Shelton is very effective across the middle off a quick slant because of his nice blend of speed and leverage. Not to mention, he really has exceptional ball skills to high-point passes outside his frame. He has been working on the special teams coverage units and garnered praise from special teams coach Mike Priefer on numerous occasions.

Rookie Rodney Adams was more involved in the afternoon practice session and ran a beautiful crosser to get open in zone against linebacker Ben Gedeon. He also used a nice head fake to snap off a comeback route against Antone Exum Jr. in the slot. Adams hasn’t run many routes vertically down the field, but has executed well on short-to-intermediate ones. Also, on special teams, he and Stacy Coley were more comfortable tracking punts. They camped under them and didn’t overrun the ball. However, they both need more work.

Tight ends working on fundamentals
The tight ends spent an extensive amount of time working on run blocking and pass protection in position drills. Tight ends coach Clancy Barone was instructing the players to set a strong base and deliver an inside punch to gain initial leverage. They also were working on route starts and getting off of blocks. Both Bucky Hodges and Nick Truesdell need work as blockers and protectors and responded well to the coaching. It will be interesting to see how they handle run blocking and pass protection when the pads are strapped on later in training camp. These fundamentals will be huge for a player like Bucky Hodges who is likely going to play a significant role this season.

Hodges didn’t run many routes, but hauled in two nice comebacks in the soft spots of coverage. Nick Trusedell made a tough grab on a high throw by Case Keenum in traffic. He high-pointed the pass on cornerback Jack Tocho and burst up the field. He is a tough matchup for cornerbacks and linebackers because of his size and ball skills. The tight ends haven’t seen a large amount of reps, but Truesdell has made a strong first impression.

Isidora making a strong impression
It is still hard to evaluate offensive lineman without pads, but several performances stood out as the intensity level took a small step forward in the afternoon session.

After a strong first day, Freddie Tagaloa struggled in pass protection when matched up against defensive tackles with a blend of power and quickness. He lost off the snap, got off balance, and was unable to recover. In college, he struggled with speed and Jaleel Johnson exposed him in team drills.

Another offensive lineman that has performed well is rookie guard Danny Isidora. He has shown off his above average movement skills and wide frame. He wins with a strong base and gets to the second level with his quick feet. Head coach Mike Zimmer has been impressed with Isidora, too. In his Tuesday press conference, Zimmer said, “I’ve been impressed with Isidora the whole time he’s been here,” Zimmer said. “I think he’s done a nice job, I’ve got a lot of hopes for him.”

Left tackle Aviante Collins showed he can move well for a player with his size, but I’m worried about how he’ll stack up against more powerful rushers when the pads are strapped on. He just doesn’t appear to have a strong upper body frame to compensate for his short arms. However, I still believe he has upside. It will be easier to evaluate him in a few days, but he struggled Tuesday.

Center Pat Elflein struggled on Monday when snapping the football, but didn’t have any miscues during Tuesday’s session. His battles with Jaleel Johnson were fun to watch Tuesday as they both traded blows.

Jaleel Johnson looks the part
Two defensive lineman stood out during the Tuesday afternoon session. Defensive tackle Jaleel Johnson caused two quarterback pressures as he used a blend of quickness and power to get guard Freddie Tagaloa off balance. His uses his hands very well and plays extremely explosive out of the stance. He has a strong upper body and wins with power on a consistent basis. Johnson will be someone who could make noise when more contact occurs in practice.

The other standout: undrafted rookie Dylan Bradley. He may have added more weight to his frame, but is still small inside. Nonetheless, he is extremely explosive and compact out of his stance. He won a leverage battle against Danny Isidora to cause interior pressure. Bradley also used his quick feet to get guard Freddie Tagaloa off balance. He pushed him aside and picked up a quarterback pressure.

Elijah Lee busts into the backfield
Ben Gedeon was exploited in zone coverage as Rodney Adams caught a pass in traffic. This is the biggest worry about Gedeon and he’ll need to show he can handle his responsibilities in coverage at the next level. There hasn’t been a substantial amount of coverage reps, but he was a step late during his one opportunity in the afternoon session.

Exum Jr. shines in new role
In the secondary, Antone Exum Jr. has been taking reps snaps at nickel cornerback. This switch may be a positive development for the veteran safety. He is getting more comfortable with the footwork and technique associated with the switch. Defensive backs coach Jerry Gray was shouting him out during numerous portions of practice for executing his assignments. He shut down Rodney Adams in the slot, forcing a checkdown. Later in practice, he swatted away a pass intended for Adams on an out pattern. If he can make the switch, Exum Jr. could carve out a role within a cornerback room searching for depth.

After a relatively solid first day, Tre Roberson was exposed on numerous occasions. He has really struggled with double moves and head fakes. Stacy Coley won with a beautiful rotation of his hips at the top his route. Roberson was unable to sink his hips and rotate to make a play on the ball. Roberson also lost when wide receiver Isaac Fruechte snapped off a quick slant across the middle. He lost off the snap and was unable to recover. This comes just hours after Mike Zimmer noted Roberson needed more work as a player during a press conference.