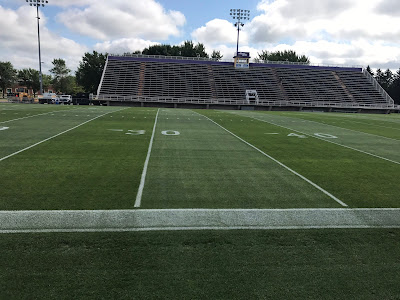 The Minnesota Vikings held their first practice session of training camp with rookies and select players taking the field. Daniel House takes you inside his first training camp notebook of the season!

The Minnesota Vikings held their first practice session of training camp with rookies and select players taking the field. 22 offensive players, 14 defensive players, and two specialists ran through drills on a beautiful day in Mankato. With limited contact, there wasn’t much you could glean from the players up front, but several skill players on offense and defense stood out in their training camp debuts.

For more, take a dive inside the first training camp notebook of 2017:

Heinicke’s strong arm
Quarterback Taylor Heinicke looked sharp during the first day of practice. He delivered passes with improved arm strength and touch up the seam. He found wide receiver Rodney Adams on an out to the sideline, hitting him in stride as he broke to the sideline. He was most impressive on intermediate passes 15-20 yards down the field. Heinicke delivered passes with excellent anticipation and timing as he went through his reads. Late in practice, he found tight end Bucky Hodges, who ran a beautiful corner post in the soft spot of the coverage. Heinicke moves well in the pocket and can find his targets up the field on the run. Arm strength was something Heinicke needed to improve and it looked much better today. We will see how he performs when more pressure is thrown his way later in camp. However, it was a strong start to training camp for Heinicke.

Quarerback Case Keenum had an inconsistent practice. He struggled to push the ball down the field vertically. A strong wind was cutting across the field and it drastically impacted his ability to throw to the sideline. Wide receivers were waiting for passes as they ran outs and corner posts. Early in practice, wide receiver Cayleb Jones ran a nice route up the seam with a strong head fake to beat cornerback Tre Roberson, but Keenum overthrew it deep. Later in the session, wide receiver R.J. Shelton ran a fade route down the sideline and Keenum underthrew the pass. It’s clear to see Keenum’s arm strength deficiencies, but he improved as practice progressed. He delivered a strong throw to the sideline as wide receiver R.J. Shelton ran a beautiful out to the sideline. Some of his early troubles could be related to timing with the wide receivers.

Dalvin Cook is slick as butter
It is clear to see why so many draft experts were surprised to see running back Dalvin Cook slide down the draft board. Cook moves so well in space and cuts with above average fluidity in tight spaces. He is extremely elusive and makes defenders miss with his quick cutbacks. When he runs of out of the shotgun, he gets downhill quickly with impressive explosion. More importantly, he is patient and runs with excellent vision to find open rushing lanes. He is just very natural as a runner with the ball in his hands. Cook can also be an asset in the screen game because he is dynamic when he gets to the edge.

RJ Shelton stands out, Caleyb Jones is intriguing
Wide receiver RJ Shelton burst onto the scene in his first day on the practice field. During team sessions, he was able to get open on a consistent basis with crisp routes. He sets up the defensive back well and drives hard off his back foot to get separation. Shelton also has strong ball skills to high-point passes. He won with his strong first step and explosion out of the break during a comeback route vs. Terrell Sinkfield. Later in 7-on-7 work, he ran a crisp out route to the sideline, showing great body control and hands to high-point the pass in traffic. He might be a sleeper worth keeping an eye on.

Another wide receiver to monitor during camp is big-bodied pass catcher Cayleb Jones. He ran a beautiful double move to get open on Tre Roberson, but Case Keenum overthrew the pass. Later in practice, he beautifully snapped off a comeback route and displayed his strong hands in traffic. Jones has so much length at 6-foot-3 and wins with his quick first step. When he tracks passes, he displays extremely strong hands and catches the ball well outside his frame. It will be worth seeing him run more routes against press coverage, but his frame and ball skills are enough to give him some intrigue.

Wide receiver Rodney Adams had one dropped pass, but ran a beautiful out route on cornerback Terrell Sinkfield. He set him up with a head fake and a strong cut out of his break to make the grab up the sideline. It is clear to see Adams is a player you can get the ball to in space. It will be worth seeing how his route running progresses during camp with more reps.On special teams, Adams nearly overran a punt during return work. He had some issues tracking punts, but looked more comfortable as practiced progressed.

Nick Truesdell has another gear
Tight end Nick Trusedell got open on a crosser and turned on the jets as he motored into the second level of the defense. At 6-foot-6, 252 pounds, Truesdell flashed another gear in the open field. He is even bigger than one first imagined with his long legs and strong upper body. It is worth seeing him run more routes throughout camp, but he has a very intriguing skill-set when you evaluate his game in person.

Rookie tight end Bucky Hodges was rather non-descript on the first day, but ran a beautiful corner route to haul in a reception during team drills. He will be a huge threat when he’s lined up against a linebacker because of his athleticism and size. It will be worth monitoring how his route running and run blocking skills evolve throughout camp.

Evaluating the fronts (as much as possible)
It’s hard to evaluate offensive lineman this early in camp, but 6-foot-7 offensive guard Freddie Tagaloa stood out. He is rather sound fundamentally, setting up with a strong base and delivering a powerful punch with his long arms. Tagaloa moves well for a player with his size and body type, too. I want to see how he handles more power rushers when pads are strapped on, but he stood out in a limited contact practice. He looks odd inside as a guard, but should hold his own there. It is worth noting left tackle Aviante Collins and his athletic prototype. He has very light feet and plays quick for a guy with his size. Based solely off length, Tagaloa and Collins look like they could switch spots. However, we will see how they perform in OL/DL drills later in camp.

Center Pat Elflein snapped two balls over Case Keenum’s head, but had no trouble on other occasions. He looks the part and appeared to play a strong leadership role for the players around him. Rookie guard Danny Isidora also notched a false start penalty during the team session, but displayed his light feet and athletic upside throughout practice. It will be worth evaluating how he handles power rushers when the pads come on July 29th.

On the defensive line, it’s hard not to notice the length and athletic potential of defensive end Tashawn Bower. There wasn’t any contact or pads, but Bower appears to be focusing on the details of his pass rushing arsenal. It easy to see his upside as he works during individual drills. Not to mention, he played an integral role on special teams during today’s practices. Inside, Jaleel Johnson looked quick and had a stronger upper body frame than I initially anticipated. It’s hard to assess many of these defensive lineman without pads, but Johnson and Bower are two skill-sets that stood out.

Wilson is rangy in coverage
At linebacker, Ben Gedeon looked very comfortable on the football field. He reacts very well to plays and isn’t afraid to square up in the gap to prepare for a run stop. His instincts and natural feel for the game really stood out as he manned the middle of the Vikings’ linebacker corps. When the pads come on, his toughness will perfectly complement his instincts and fundamentals.

During team drills, undrafted rookie linebacker Eric Wilson swatted away a crosser intended for wide receiver Rodney Adams. He backpedaled hard and recognized Adams was breaking off his route. He got his hand in the passing lane and made a play on the ball. He also forced an incompletion in the flat intended for running back Terrell Newby. Wilson was very rangy and the coverage skills we saw on tape translated to field. If you read any of my training camp previews, you know how much I liked Wilson’s tape.

Roberson steals the show
In the secondary, cornerback Tre Roberson stole the show. He picked up a tackle for loss in the backfield and a pass breakup on a throw intended for Mortiz Böhringer. Later in practice, he beautifully covered wide receiver Isaac Fruechte’s fade up the sideline. He shadowed him to the boundary, shifted his hips, and extended his arms to snatch the interception. Roberson’s footwork and ball skills were fantastic on the play. His lone blemish came when he was beaten on a double move by wide receiver Cayleb Jones. It will be worth seeing if Roberson can steal the sixth cornerback spot in camp.

Cornerback Horace Richardson and safety Jack Tocho stood out during individual drills. They rotated their hips well and well and are very fluid out of their backpedal. In the W drill, they cut smooth and sunk their hips as they rotated their lower half. Richardson might be a slot cornerback worth keeping an eye on, while Tocho is a versatile safety in the backend.