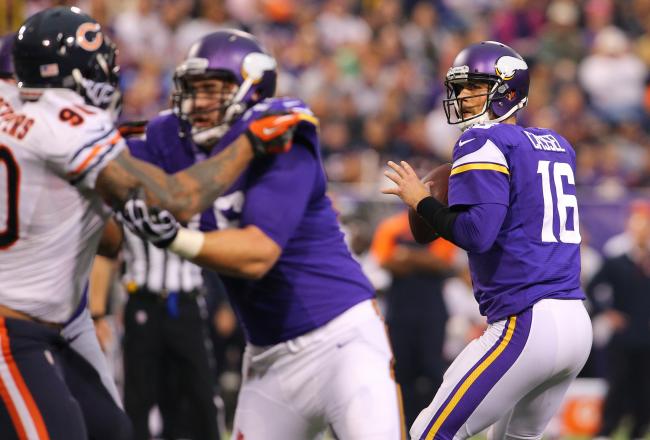 How do the Vikings keep the momentum and knock off the world champions? Daniel House says it will take a great effort and he explains it clearly in his latest preview post.


The Vikings are looking to build upon a thrilling overtime win versus the Bears last week and win on the road for the first time this season. The Ravens are in control of their playoff fate and will be looking to finish strong over their remaining slate of games. Baltimore is searching for a season-high third victory, as they look to keep pace in the AFC Wild Card race. The Vikings are 2-1-1 over their last four, since losing seven of their first eight matchups of 2013 and will be mathematically eliminated from playoff contention with a loss or a Detroit win today. The Ravens are notoriously difficult to beat at home and Joe Flacco is 40-8 in games at home in Baltimore, which doesn't bode well for a Vikings team who has failed to win a single road game this season. This team will need to execute beautifully in several categories and a very sophisticated gameplan will need to be established in order to knock off the world champions in Baltimore. What is necessary for the Vikings to win today?

The Vikings offense moved the ball relatively well when Matt Cassel entered the game for a concussed Christian Ponder last week. Greg Jennings was finally found in the offense and scores touchdowns on every five pass attempts Matt Cassel throws to him. Jennings was brought into this offense with the thought of become a reception receiver who could move the chains on third down. He is finally developing with a quarterback who can make the throws necessary to win ball games. Cassel will get the start today and this benefits the flow of the Vikings offense. The weather could be a factor as snow is currently falling in Baltimore, which means both teams will pound the ball with Adrian Peterson and Ray Rice, respectively. After being ranked 20th in run defense last year, the Baltimore defense has an increased pride this year and is ranked in the top ten in 2013. Peterson will run the ball on this front seven, which will open up passing opportunities in the short and intermediate variety. Matt Cassel will need to handle the famous single-high safety look from the Ravens, which means he may have to dump to safety nets such as tight end John Carlson. The Vikings pass catchers will need to find holes in this coverage scheme, which in turn will keep the offense moving today.

The Vikings defense needs to start creating turnovers in the variety of interceptions, which has happened just once this season, by free agent, A.J. Jefferson. This all starts up front with a pass rush and Brian Robison will need to execute in a favorable matchup against mediocre offensive tackle, Michael Oher. The Vikings defense will need to bottle up screen passes, which are running back Ray Rice's forte. The Ravens have a nice plethora of wide receivers, including Jacoby Jones and Torrey Smith, which will need to be addressed by Xavier Rhodes. Rhodes has played very well and has logged 16 passes defensed over the past three games. This team needs to pressure Joe Flacco early, stop the run, and force the Ravens to throw in the potentially difficult weather conditions in Baltimore today. The Vikings defense will need to win the turnover battle, which is something that hasn't happened for this team in games they have lost this season. The defense has improved over the past few weeks, but against a stellar opponent in Baltimore, they will need to play at a whole new level.

The Vikings special teams group is one of the best in the NFL and they will matchup with the Ravens, who are led by Tandon Doss, the league's best punt returner. It could be a cat and mouse battle in today's game and it will be punctuated in the weather conditions today. Justin Tucker won't be able to boot the ball as far, which means Cordarrelle Patterson will be able to bring the ball out of the end zone and make explosive plays against Baltimore. The Vikings coverage units will need to handle Tandon Doss and keep the Ravens with a long field to work with. Field position will be critical in a game that could very well be treacherous with thesnow and freezing rain in the forecast.

None of the inactives are surprises and the Vikings will be at essential full strength in this game with the Ravens. Baltimore tight end Dennis Pitta is active for the first time this season and will be a huge matchup threat for the Vikings defense.

The Vikings need to move the ball on the ground, mix in the pass, stop Joe Flacco and Ray Rice, and force Baltimore to pass the ball in the snowy weather conditions.