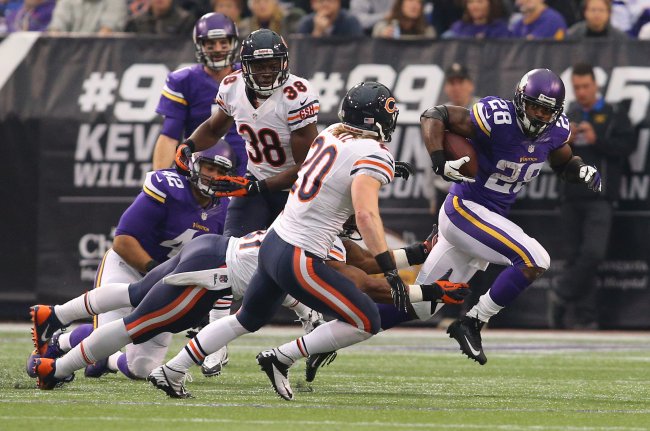 Daniel House discusses a thrilling overtime win for the Vikings, who dealt a big blow to the Chicago Bears playoff hopes. Who stood out and why is this win important for the future of this team? He answers all this and more in his latest game review.

The Minnesota Vikings have had their fair share of misfortunes and last second losses during the 2013 season, but yesterday, they finally closed a game-well sort of. The game started very slow and the halftime score was just 7-6 as the Bears kicked two field goals and the Vikings scored as Cordarrelle Patterson rushed for a 33 yard touchdown. Patterson lined up in the backfield in the I-Formation, fielded the pitch to his right, and danced into the end zone in a beautiful fashion. With the score, he became the first Vikings player to score on a touchdown reception, a touchdown scamper, and a kick return in the season. Patterson was listed as a starter yesterday and finally saw his highest snap count (48) of the 2013 season.

The three rookie first round draft picks saw their most extended time of the 2013 season. Xavier Rhodes recorded three passes defensed and Sharrif Floyd added a forced fumble and a sack in yesterday's game. The young players are seeing extended playing time for this first time this year and it is finally paying dividends for this Vikings team. The Vikings defense improved yesterday and allowed just 20 points, which is something they haven't done all season. Audie Cole is playing well in the middle and graded +3.3, while Chad Greenway improved immensely and was awarded a +3.4 by Pro Football Focus; the two highest ratings on the defensive side of the ball. Cole and Greenway helped bolster the Vikings coverage grade to +4.1, the best of the 2013 campaign. The main coverage issues were at the hands of Vikings cornerback Chris Cook, who allowed three catches for 132 yards and two touchdowns to Alshon Jeffery before being ejected for contact with an official. The Vikings defense stepped up in Cook's absence and the impressive play of Robert Blanton in the nickel situations has been a pleasant surprise for the Minnesota defense.

From an offensive standpoint, Matt Cassel entered after Christian Ponder took a shot in the chin near the end of the first quarter and left with a concussion. Cassel played consistently and threw 20 for 33, with 243 yards, along with a touchdown and interception. Matt Cassel posted an accuracy percentage of 85.2%, with five batted balls, three drops, and one throwaway, finishing 20 of 27 on passing he aimed. Pro Football Focus graded Cassel the highest of any Vikings' QB since Brett Favre in week 17 of the 2009 season.

Chris Cook left and the Vikings were down 20-10 and with a depleted secondary, the game looked like it was turning fast for Leslie Frazier's squad. The team didn't hoist the white flag and it was really awesome to see. The Vikings went on a long touchdown drive and Matt Cassel found Greg Jennings to improve the score to a 20-17 deficit. The Vikings defense got a stop and the Vikings went on a game-tying drive that was capped by a Blair Walsh field goal, which made the score 20-20. Minnesota converted on 4th-and-14 on their own eight yard line during the game tying drive and their resilience was the key to the comeback. The Bears moved up the field late in the fourth quarter and attempted a 66-yard field goal with seconds remaining in regulation. The Vikings sent Cordarrelle Patterson back to receive the miss, in an effort to reenact the Iron Bowl in 2.0 like fashion. The kick was short, but Patterson was bottled up and the game went to overtime.

The Bears wont the toss, but punted on their first drive in overtime. Minnesota moved up the field and got into position for Blair Walsh to hit the game winner from 38 yards. Walsh made the kick the fireworks blasted, fans celebrated, but the field goal was called back for a facemask by Rhett Ellison. Walsh backed the field goal try to 57 yards and hooked the attempt to the left, while the Bears took over ensuing the miss. The Bears moved into field goal range, but Robbie Gould missed a 47 yard field goal try, which led the Vikings to drive up the field and win on a 34-yard field goal off the leg of Blair Walsh. There were no fireworks the second time, but the Vikings managed to do something they hadn't done this season; get a win at home in the final seconds.

The Vikings hadn't been to overtime on back-to-back occasions, since 1995 (weeks 5 and 6). The game nearly ended in a tie, which would have been the first time a team had registered consecutive ties since the 1971 Raiders. One thing was certain from yesterday's game, Adrian Peterson would not be denied of win this week. With his groin visibly bothering his lateral movements, he still managed to rush for 211 yards, while carrying the team to victory. Peterson was hitting the NFL's worst rush defense like crazy, but his predominant success came through the A-gaps (44 yards on seven carries) and especially on the outside, where he registered 132 yards on 16 carries and five of his missed tackles.

The Vikings dealt a serious blow to the Chicago Bears playoff dreams and with the Bears being 6-6 and essentially two games behind the Lions for the division lead, it will take a miracle for them to reach the playoffs. The Vikings aren't mathematically eliminated from the playoffs, but the time is coming soon. Many are worried about Minnesota's draft positioning, but can't fans soak in the join of beating a rivalry team in a year that hasn't awarded many positives?

The Vikings won and beat an opponent they have a huge rivalry with, enjoy it!