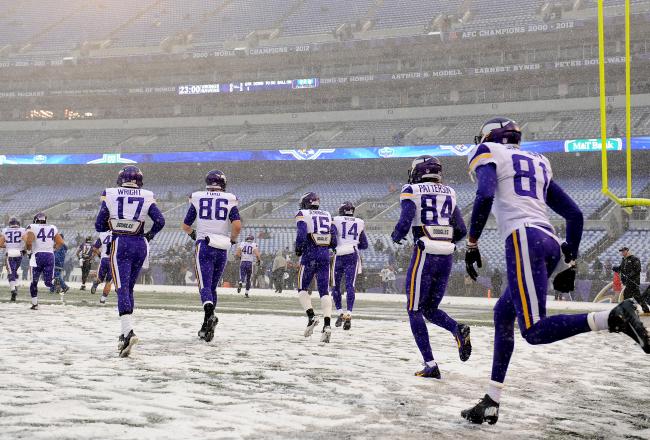 The Vikings lost in one of the craziest games you will ever see and players are letting out their frustrations. How does this change the future of the Minnesota Vikings? Daniel House tells you why a big shake up is coming this offseason and for one reason: the inability to close games.


The game started with a snowstorm and ended with flurries of frustration for everyone involved in Minnesota Vikings football. The second half developed to mere flurries, but it seemed as if the real snowstorm came in the last 125 seconds in Baltimore, MD today. The Vikings and Ravens combined for a whopping five touchdowns in just 125 ticks, putting today's game as one of the more unforgettable in NFL history. The mere zaniness began when Joe Flacco found tight end Dennis Pitta late in the fourth quarter, putting the Ravens on top 15-12, with just 2:05 remaining in the fourth quarter. Little did we know, we were in store for much more in the final moments of today's contest. With 1:27 remaining, Toby Gerhart busted through the line of scrimmage and added a 41-yard touchdown en route to a two-play scoring drive for the Vikings. The crazier turn of events began when the coaching staff decided to pooch kick the football to Jacoby Jones following the Gerhart touchdown scamper. Jones slipped two tackles and beat Blair Walsh, as he sprinted down the sidelines for a 77-yard kick return touchdown. So with 1:16 remaining the Vikings had two timeouts to get into range for a field goal to tie the 22-19 score, or time for a touchdown to take a late lead. After three plays, Matt Cassel found Cordarrelle Patterson on the outside during a wide receiver screen, Patterson shook three tackles and busted loose for a 79-yard touchdown and the Vikings appeared to be in business. The Vikings gave the Ravens the ball with just 45 seconds left on their own twenty and the Ravens went on a five-play 80-yard touchdown drive, which was punctuated by a questionable pass interference call on linebacker Chad Greenway. It was to no avail, as the Vikings surrendered a 9-yard touchdown from Joe Flacco to Marlon Byrd in the back of the end zone and the Ravens went on to win 29-26.

Matt Cassel deserves praise today and considering he played in extremely snowing conditions, he still managed finish 17 of 38 for 265 yards and two touchdowns today. He was extremely cold-blooded on third-down and found Greg Jennings, Jerome Simpson, and Cordarrelle Patterson on several critical occasions. Cassel has proven he can be a very good game manager and the Vikings will need to decide whether they will address defense in the draft or look towards a Johnny Manziel type quarterback to change the outlook of the offense. Time will tell, but the Vikings seemingly have more issues to worry about over the final three weeks of the regular season.

Adrian Peterson was injured early in the second quarter and Vikings fans everywhere collectively held their breath. Peterson was tackled by Baltimore's Arthur Brown on a third-down reception from quarterback Matt Cassel, as he tried to reach for a first down and fumbled out of bounds. Peterson rolled over in considerable pain and needed to be helped off the field. After several minutes of examination, Peterson was taken to the locker room on a cart for x-rays, which came back as negative. Peterson later returned to the sidelines and addressed his knee with the media following the game.

"My initial thought was I broke something. I'll get an MRI done tomorrow and will know more," Peterson explained following the Vikings 29-26 loss.

Officiating was questionable throughout today's game and players were very vocal with Pete Morelli's crew in the locker room. After an early fumble, in which Toby Gerhart appeared to be down-by-contact, the officials overturned the play and Joe Flacco soon found Ed Dickson for a 1-yard touchdown. Later in the contest, Chad Greenway was called for a questionable pass interference call, which turned the tides of the final drive and allowed the Ravens to score a touchdown on the final possession. Several players took to social media to address the questionable officiating from the NFL crew.

The NFL has struggled with the officiating crew in the past and Pete Morelli was at the hands of the 2009 NFC Championship game, where Brett Favre was ripped to mere smithereens. This crew was criticized for throwing just two penalty flags in a game a few weeks ago and they seemingly have had an inability to make correct calls. The game cannot be blamed on zebra print humans, but can be attributed to the Vikings defense's inability to make stops late in games.

The Vikings have now lost five games in the final minutes of contests and all of them have come at the hands of the defense. How is this acceptable, you ask? It isn't and can and will be fixed in the offseason. Don't get me wrong, this is a business and I love Leslie Frazier and many involved in the current flow of the organization, but this team needs new blood inside the walls of Winter Park. Five last second losses are unacceptable and will lead the Vikings to securing a very high draft pick in May's NFL draft. Given the inconsistencies surrounding the offense and defense and the inability to adequately be an in-game coach, it seems as if Leslie Frazier may be heading out of town. I know officiating wasn't the best in the end of the game, but the situations the coaching staff placed the players in at the end of today's game and throughout the season are completely inexcusable. The defense made plays early in the game and corralled three interceptions, which is something that hasn't been done for a long time among this group, but again, it doesn't matter if you can't win football games.

Bringing all-out blitzes on two-point conversions and dropping into prevent in late situations, is the reason why this team is 3-9-1. That comes back to coaching and the Vikings need a hard-nosed football coach to enter this team and light a fire inside the walls of Winter Park. Leslie Frazier, Alan Williams, Bill Musgrave, and Mike Priefer can't control what the defense does on the field, but they can do their best to place the players in correct situations to win and this hasn't been the case. The young players that Rick Spielman drafted are contributing and with creative minds at the helm of the coaching staff, along with a franchise quarterback like Johnny Manziel, this team isn't far away from major success. If placed in the right opportunity, this team could be 8-5 and looking in the rear view mirror at the other NFC North opponents, but do to some poor personnel decisions, that hasn't happened. The praise I must give to this coaching staff is the amount of effort they get from each of their players on a week-by-week basis. This team could have thrown in the towel weeks ago, but they are still playing hard and have continually lost in the final moments. The heart among these coaches and players are still there, but in the NFL, it comes down to winning games, and if you cannot do so, you can't build a dynasty.

With young players such as Cordarrelle Patterson, Xavier Rhodes, Audie Cole, and Sharrif Floyd showing growth and elite abilities, it proves how close this team is from becoming playoff caliber. Add a coaching staff that can make decisions late in games, a franchise quarterback like Johnny Manziel who can be elite in the league, and watch the young players mesh as the Vikings look to take the roster to the next level. Veteran leaders on this team deserve the chance to win football games and even though we lost today, the last three games can bring joy to many involved. The Vikings are a great organization and with the help of several key additions, they can reach reach immortality- just give it time.