How do the Vikings stack up with the Eagles in tomorrow's game? Daniel House believes the Vikings will need to play perfectly in order to shock Philadelphia at Mall of America Field, but how does this happen? He explains it all in his latest preview post.

Last week, a game that began with flurries and ended in a monster snowstorm, resulted in the Vikings losing in the waning moments for the fifth time of the 2013 season. Minnesota competed in one of the craziest endings with the Ravens last week, as a whopping five touchdowns were tallied in the final 125 seconds of the contest. It was one of the zaniest endings you will ever see, but the Vikings lost in the final moments again, which has been the story of this season. Another week and another meaningless game for a Vikings team that has no hopes, other than positioning for the NFL Draft in May. The Eagles on the other hand, are a team fighting for their playoff lives as they are just a lone game ahead of the Dallas Cowboys in the NFC East race. Philadelphia has continually caught breaks this season and may grasp another in the event Vikings running back Adrian Peterson misses tomorrow's game with the sprained foot he suffered last week in Baltimore. Peterson participated in the walk through today and felt fine per NFL sources, but the determination of his status in tomorrow's game is still uncertain. The Eagles missed Aaron Rodgers in Green Bay during week ten and may avoid getting their ankles broken by Adrian Peterson in the 15th stanza. The Eagles have a chance to clinch the NFC East before they visit the Cowboys in the season finale, but a lapse in Minnesota would cause a major problem for Philadelphia. The Vikings have many injuries problems and with a depleted secondary, combined with a chance the reigning NFL MVP may miss the game, the odds seem to be stacked against the Vikings this week. What do the Vikings need to do to pull an incredible upset tomorrow?

Weather delayed the 2010 matchup between the two teams, pushing it from Sunday to Tuesday. The Vikings won the game at Philadelphia 24-14. Minnesota won the first seven games of the series. The Vikings scored 28 points in the 4th quarter of the game on 12/22/85 to help them overcome a 23-point deficit, the 2nd-largest deficit overcome in Vikings franchise history. The Vikings are 6-4 at home against the Eagles and 2-3 at Mall of America Field.

The Vikings may be without Adrian Peterson which makes a very complicated offensive scheme, even more difficult. For the first time this season, Matt Cassel will be forced to throw the football to win the game. There won't be a security blanket in the backfield, especially in the event Toby Gerhart misses the game with a hamstring injury, which puts the load on shoulders of Cassel. If the Eagles high powered offense skips out to a huge lead early in the game, they will force the Vikings to put the ball in the air, which hasn't been the strong suit of this ball club in 2013. Only three NFL teams have allowed more 1st half points than the Vikings, which means if Nick Foles get off to a hot start, Minnesota will struggle to compete. In the event Peterson misses tomorrow's game, the Vikings need to utilize players such as Cordarrelle Patterson and Jarius Wright in creative ways. Patterson has become explosive and can be lined up in the backfield to give teams the look of a strong, athletic body in the backfield.

As shown in the image below, the Vikings need to attack the Eagles defense with crossing routes and the primary problem has come when Philadelphia allows receivers to settle into the zone, like Arizona wide receiver Michael Floyd did in this instance. 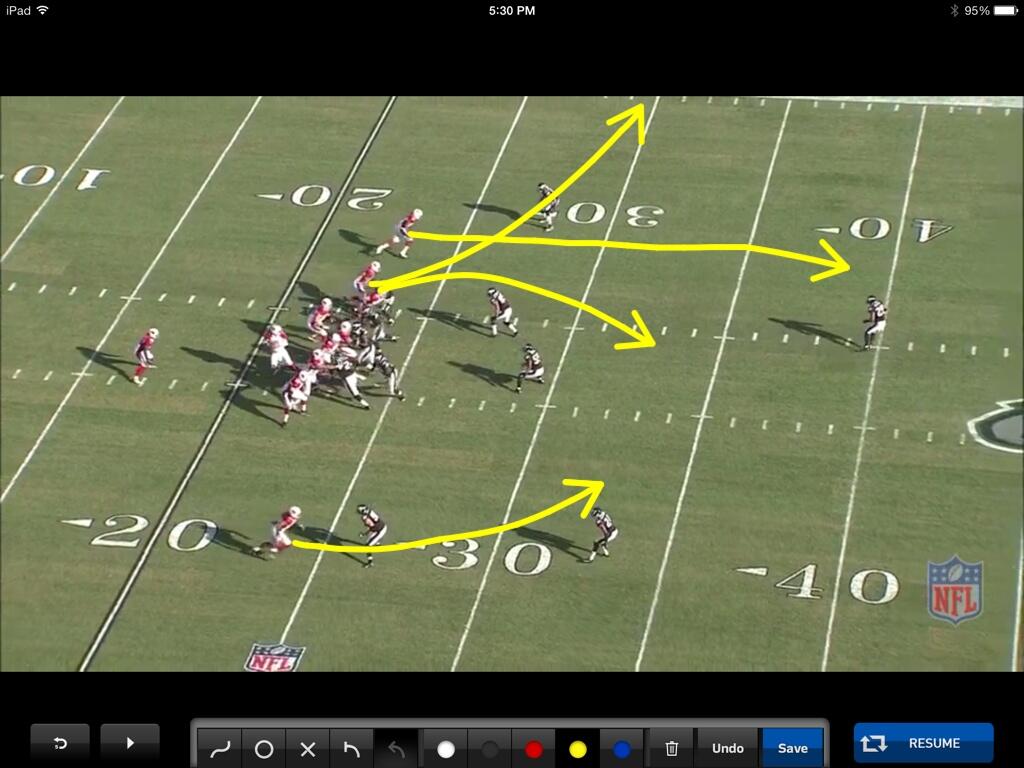 In another instance, the Eagles like to apply pressure through blitzes in the A and B gaps and do some by rotating and disguising linebackers and defensive ends at the line of scrimmage, which was the case in the following image below. This play resulted in a sack and was an issue due to the inability of the offensive line to handle the scheme. 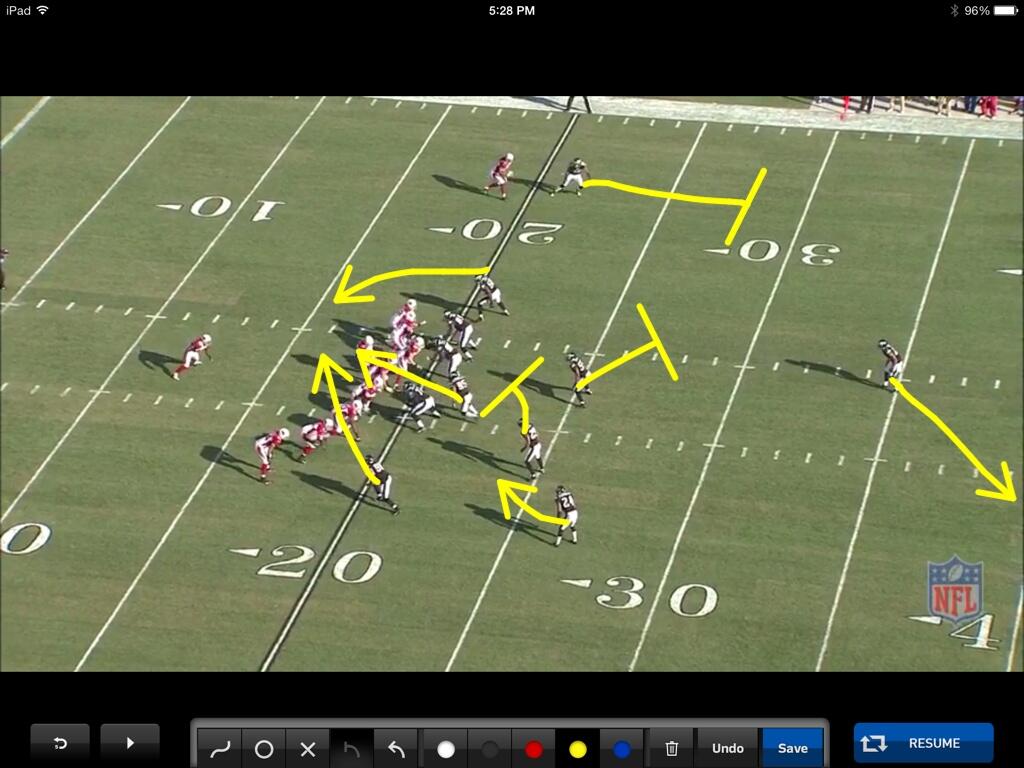 Matt Cassel will need to handle the great play of safety Nate Allen, who has been briliant at shifting in and out of disguises this season. In the game I studied against the Cardinals, he shifted into a cover three pre-snap disguise and came over the top in a cover two to intercept Larry Fitzgerald. The Philadelphia defense has been slightly underrated and over the last three games has created eight turnovers, which doesn't bode well for a Vikings team that could be without one of their biggest play makers. In order to have a chance, Matt Cassel will need to make the throws necessary to win and exploit the Eagles weaknesses when they drop into deep zone coverage's. Along with that, the Vikings offensive line will need to adequately handle blitzing schemes, because if Cassel has limited time to make plays, the Vikings will get blown out in front of the home crowd.

The Vikings will need to handle Nick Foles, who threw his first interception in ten games last week, as he has been emerging during the Eagles search for a franchise quarterback. The strong armed second year quarterback from Arizona is fitting into Chip Kelly's read-option style offense. With the NFL's leading rusher (1,305 yards), LeSean McCoy in the backfield, the Eagles have won five consecutive games in a row and are pulling away from the NFC East competition. The Vikings defense will be exploited in a even larger way in the absence of cornerbacks Xavier Rhodes and Chris Cook, making the secondary very thin. Minnesota will be relying on a cast of characters such as Marcus Sherels, Shaun Prater, converted safety Robert Blanton, and recently activated practice squad product Robert Steeples. Nick Foles and head coach Chip Kelly have to be salivating over their chances to throw on the Vikings secondary, along with mixing in the run game, which will in turn open up the play-action passing game.

The Vikings will need to handle the read-option and in the image below, it is illustrated by showing how the Eagles utilize the play-action style, along with finding the flats with tight ends such as Brent Celek. 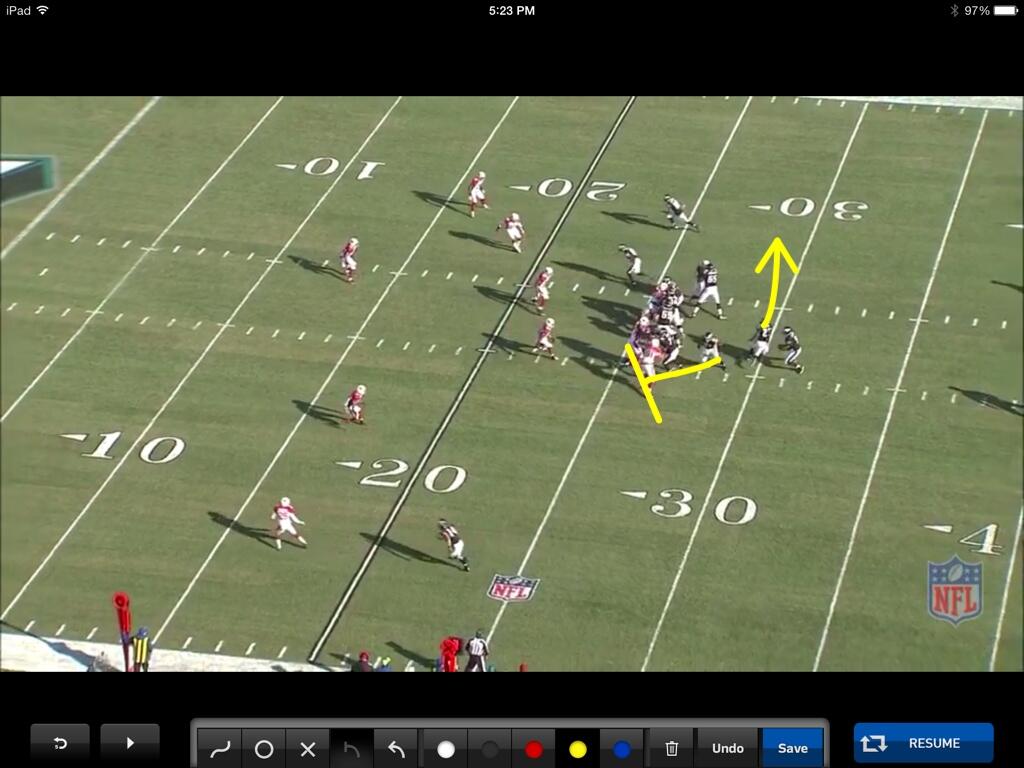 Foles could also pull this ball back and look over the top for a receiver like Riley Cooper over the middle, or DeSean Jackson on the vertical end. The Eagles pass protection has improved, allowing Foles to stand for extended periods of time, while he reads the defense and makes the necessary throw. When teams have rushed the passer well against the Eagles, Philadelphia has struggled and lost the bulk of those matchups. Brian Robison will be matched up with rookie Lane Johnson and will need to take advantage of his inexperience in the league. If Foles is pressured off the edge and is forced to have a limited amount of time to read the defense, the Philadelphia offense will come to a stand still.

On another note, the Eagles are great at converting in the red zone, due in part to the great play-calling of head coach Chip Kelly. In this instance, Foles fakes a pitch to McCoy, the Eagles run crossing routes on the left and rookie tight end Zach Ertz runs a perfect corner route in the end zone. This pulled the defense to the left side of the field and was executed perfect because of the defensive ends over pursuit of LeSean McCoy. 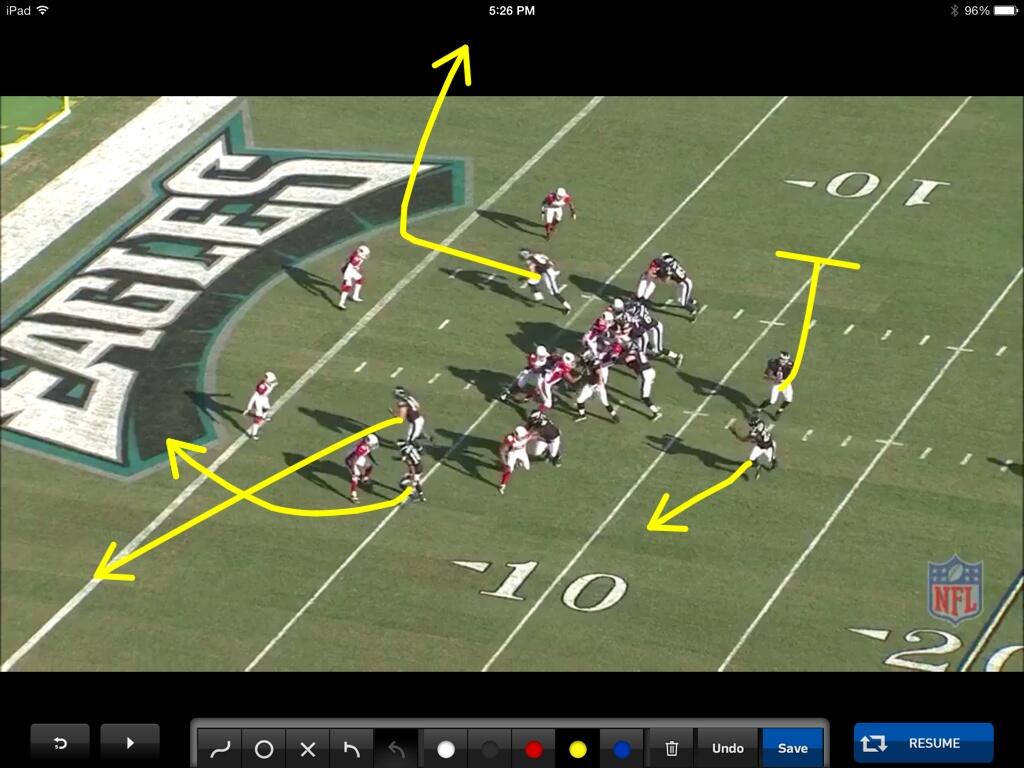 The Vikings will gain Harrison Smith on the top of the defense, which help alleviate a situation in this game for Minnesota, but plays like these are ran frequently in the red zone by the Eagles offense. This team is very athletic and will push the tempo by running no-huddle during some possessions and will try to do this tomorrow to limit the Vikings ability to substitute into schemes, along with wearing the group down.

The Eagles have been slightly leaky to kickoff returners, allowing 21.8 yards per kickoff return and they haven't even met the league's best kick returner-Cordarrelle Patterson. The Vikings will look to add an explosive play to aid any lost production on offense if Adrian Peterson misses the game. Patterson has easily been the most productive Vikings player over the past three weeks and teams have struggled to bring the elusive receiver down. From a coverage standpoint, the Vikings will need to control the Eagles' return games and force Nick Foles to start deep in his territory, rather than with a short field, which could be the sign of death for the Vikings.

The main concerns involve Adrian Peterson and Toby Gerhart, who will be game-time decisions for tomorrow's game. In the event the Vikings will be without one or two of these backs, the Vikings activated Joe Banyard from the practice squad and if they get into dire straights tomorrow morning, they could activate preseason standout, Bradley Randle, who was resigned to the practice squad earlier in the week. Furthermore, Chris Cook and Xavier Rhodes are both likely to miss the game, which leaves the Vikings even more depleted in the secondary. One of Matt Cassel's favorite targets, John Carlson, will miss tomorrow's game with a concussion, which will elevate Chase Ford's role in the offense.

Rookie safety Earl Wolff has missed action since week ten and will be looking to make a return, but otherwise the Eagles are amazingly healthy through 14 weeks of play.

The Vikings need Matt Cassel to handle the load if Adrian Peterson is inactive, Cordarrelle Patterson will need to be used creatively, the Vikings defense will need to handle the read-option, and the defensive line must adequately rush the passer, if Minnesota has any chance to shock the Eagles tomorrow.