Greenway: "We'd love to win the Super Bowl, bring it to Minnesota" 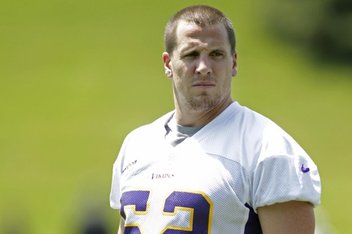 Daniel House interviewed Vikings linebacker Chad Greenway and asked him about his expectations for the 2013 season.

Chad Greenway is entering his 8th season in the league, which means he is thinking ahead to the future. Every player's goal is to take his team to the Super Bowl and hoist the coveted Lombardi Trophy. He knows his clock is ticking and the time is now for him to make his dream a reality. Being the leader of this team is important to him and he wants to build upon a 2012 campaign, which brought the Vikings to the NFC Wild Card round of the playoffs. The NFL is a business and there are certain obstacles you are going to face, but through experience he is ready for the challenge. Greenway has been a staple in the Vikings community and has always related well with the fan base.

A former Iowa Hawkeye and Mount Vernon, South Dakota native, Chad has always had a fond belief of the Vikings. He was selected in the 2006 NFL draft with the Vikings 1st round selection (pick 17).  During his Vikings debut in a preseason game against Oakland, Greenway tore his ACL playing special teams on a kickoff return. He missed the entire 2006 NFL season with the injury. Through hard work, Greenway started the 2007 season as the Minnesota Vikings starting weakside linebacker. Facing adversity paid dividends and four years later he was selected to his first Pro Bowl after a career-high 154 tackles, 13 tackles for loss, 2 sacks and a fumble recovery during the 2011 season. Not only did he come a pro-bowler, but a fixture of the Vikings defensive structure. He has become known for the tenacity he displays on the field each and every Sunday and more than anything, he wants to bring a championship to the fans.

In the interview below, Daniel House talked with one of the Vikings biggest defensive pieces to success in 2013. He asked him about his approach for the season and received a brilliant answer to his final question.