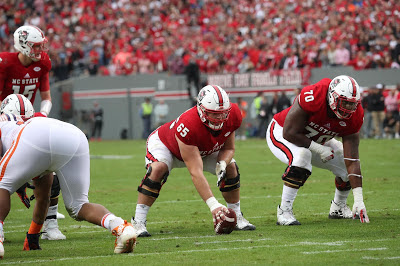 The Vikings invested into the offensive line by selecting center Garrett Bradbury. Daniel House has thoughts on the pick!

For the past three months, many discussions centered around how Minnesota would approach the offensive line. A team that lacked physicality in the trenches, needed to improve a unit that struggled to perform at an adequate level. Quarterback Kirk Cousins didn’t have much time to work and the team finished 2018 with the third-fewest rushing yards in the NFL. In the first-round of Thursday’s NFL Draft, the Vikings took their first step to address the unit. The revitalization began with the selection of NC State center Garrett Bradbury at No. 18.

It is just the second time in 13 total drafts that Vikings general manager Rick Spielman has selected an interior offensive lineman in the first four rounds. It is also the first time Minnesota has used a first round pick on an interior lineman since Randall McDaniel in 1988.

Bradbury fits the Vikings’ zone blocking scheme very well and has the athletic skills to get in space. A converted tight end, Bradbury added weight to play both guard and center for the Wolfpack. He started 13 games at left guard in 2016 before moving to center for his final two seasons of college football. Bradbury did not allow a single pressure last season, according to Wolfpack athletic department. He could play at either guard or center for the Vikings, but he feels like a natural fit to man the middle. The Vikings could move center Pat Elflein to guard, where he played 28 games at Ohio State. Either way, having two players with interior flexibility leaves Minnesota with plenty of options.

The one area where he really stands out is as an athlete. Bradbury ran the third-fastest 40-yard dash at 4.92 seconds, put up 34 bench press reps (second-best) and had the top three-cone (7.41) at his position. This blend of athleticism and power will bring much-needed physicality to Minnesota’s interior.

In a recent piece, I talked about the quickness he has to reach block and seal off both three-techniques and nose tackles. If Minnesota indeed wants to run more outside zone concepts, Bradbury fits the mold and instantly helps the interior. Now, the attention likely shifts to using another pick in future rounds on a developmental offensive tackle.