Looking at the Vikings' 2019 Schedule 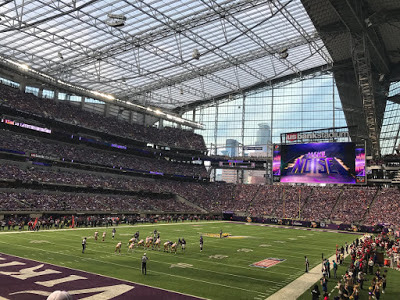 The NFL announced regular season schedules for all 32 teams on Wednesday. What are some of the key takeaways from the Vikings' 2019 slate? Daniel House takes a look!

The NFL announced regular season schedules for all 32 teams on Wednesday. The Vikings open the season at home against the Atlanta Falcons on Sept. 8 at noon. Minnesota spends a large portion of September and October on the road, but will be rewarded with plenty of home games during the final six weeks. The Vikings are also one of ten teams in the NFL to play five primetime games in 2019.

Scroll down for takeaways and stats associated with Minnesota’s 2019 schedule!

Early outdoor NFC North games
The Vikings quickly enter NFC North action with two road games against the Packers and Bears within the first four weeks. It marks the first time in 117 all-time meetings that Minnesota has played a September road game against Green Bay in back-to-back seasons. The 2019 season is also just the second time the Vikings have played a September game at Solider Field since 2001.

This prevents weather from potentially playing a negative role for either team. Not to mention, each squad will be at full strength and has an opportunity to set the tone for the remainder of the year. The team that starts strong in the first six games could get a head start in the division standings. With those games coming early, the Vikings host all three NFC North teams in the final four games. This means half of the Vikings’ NFC North matchups will be played in the final four weeks of the season.

This is the first time since 1972 that Minnesota will play each of the NFC North teams on the road before meeting one at home. They will get the outdoor divisional games out of the way in September and move indoors when the weather gets frigid. With the home divisional coming later in the season, Minnesota can rest during the Week 12 bye and recharge for one final playoff push. Essentially, the Vikings may have a chance to change the landscape of the division race down the stretch.
Bye Week Position
The Vikings’ bye week is in Week 12 and basically divides the final quadrant of the schedule up. Out of the break, they play a Monday Night Football matchup at Seattle, which gives them an additional day of rest. They will need all of it, especially with three NFC North home games and three primetime slots over the final five weeks. It essentially gives Minnesota an opportunity to recharge before a critical portion of their schedule begins in Week 13. They could make up ground in the division if they close out the season strong. Essentially, a potential playoff surge would run through U.S. Bank Stadium.

Hitting the road right away
The Vikings will need to weather the storm during the first 11 weeks. They will be on the road for six of the first 11 games, but it helps eliminate potential issues associated with cold and snow. Minnesota spends the back half of its schedule at home and in warm climates. Four of the Vikings’ final six games are at home, including three divisional matchups. An initial look at the schedule shows us how critical it will be to start the season off strong. If they can escape the first seven games with a 5-2 record, they’d put themselves in a favorable situation. It will be important because Weeks 8-10 will present arguably the biggest challenge.

It all starts with a home Thursday night game against Washington. At least Minnesota will be at home for their short week, following a Week 7 matchup at Detroit. However, the next week they travel for a tough road matchup versus Patrick Mahomes and the Chiefs in Week 9. After this tough set of games, the Vikings will fly to Dallas for Sunday Night Football. Once they get through that stretch, four of the final six games will be at home. Three of those matchups will be against NFC North opponents, including the Lions, Packers and Bears. They’ll also finish the season with three games under the lights, including one Sunday Night Football matchup and two featured games on Monday Night Football. Minnesota is just one of ten teams in the league that will play five primetime games in 2019.