Notebook: Vikings overcome slow start to knock off the Lions, 27-9 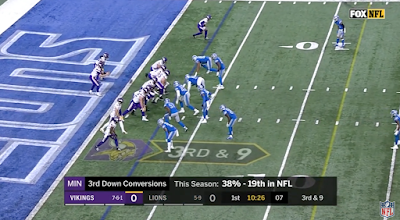 It took 25 minutes, but the Vikings eventually awoke from a deep slumber. Daniel House analyzed the win and explained how Minnesota accumulated 27 unanswered points in a 27-9 win.


After establishing a quick rhythm in last week’s 41-17 win, Vikings fans thought the team’s slow starts might be a thing of the past. However, they endured another in Sunday’s game against Detroit.

Undisciplined play and offensive predictability have plagued Minnesota throughout the season. It took 25 minutes, but the Vikings eventually awoke from a deep slumber. They scored 27 unanswered points to claim an important 27-9 win over the Lions.

Minnesota went three-and-out over the first four drives of the game. Penalties, poor field position, negative running plays and a dropped pass, had the Vikings’ offense on its heels. Through one quarter of play, they managed to accumulate just five total yards and zero first downs. Quarterback Kirk Cousins delivered several passes late and didn’t feel the pocket when he faced pressure. The offensive line couldn’t get a push, Cousins took two sacks and everything was locked up. Things didn’t change until the final two minutes of the half.

Kirk Cousins found Adam Thielen for a 40-yard gain off a busted coverage. It was the star wide receiver’s first target and catch of the afternoon. A few plays later, Cousins found receiver Stefon Diggs for an eight-yard score. Thielen has received a low amount of early targets in recent games. In the future, Minnesota must find a way to get him involved early.

Detroit’s lead was trimmed to 9-7 with under two minutes remaining in the half. Cornerback Mackensie Alexander made a stop in space and the Vikings’ offense had a chance to add more points. Minnesota reached midfield and two seconds remained before Kirk Cousins heaved a pass deep into the end zone. Detroit had seven players in the end zone, but only one player tried to make a play on the ball. Tight end Kyle Rudolph leapt in front of defenders and hauled in a 44-yard Hail Mary as time expired. After playing poorly in the first half, the Vikings entered halftime with a 14-9 lead. Rudolph put together his best performance of the season on Sunday. He grabbed nine passes for a career-high 122 yards and two touchdowns. Cousins frequently went his way in play action off roll-out looks. He also hit Rudolph off corner routes as he settled into the soft spot of coverages.

Minnesota’s offensive line continues to perform very inconsistently, especially within the interior. Mike Remmers is struggling at right guard and center Pat Eflein hasn’t played to his full potential this year. The unit was getting a better push in the second half, but they’ll need to show improved consistency down the stretch.

On the other side, the Vikings’ defense continues to perform well over the past four weeks. Excluding offensive errors and special teams help, they have surrendered 14 points per game over this stretch. The pass rush is disruptive and the coverage has been particularly exceptional in the backend.

In Sunday’s game, linebacker Eric Wilson stepped up. With Eric Kendricks missing the game due to a hamstring injury, Wilson was thrust into a starting role. Detroit used specific personnel packages to frequently place Minnesota in the base package. They had some early success, but Minnesota made some adjustments. Wilson led the team with nine tackles (three for loss), three quarterback hits and a sack. Linebacker Ben Gedeon also added eight tackles and a pass breakup in extended action. The Vikings sacked Matthew Stafford two times and held him to just 116 passing yards. Minnesota’s secondary has been performing well and has limited the overall separation gained by opposing wide receivers. Cornerback Mackensie Alexander had two pass breakups, including a crucial play in the end zone. Top cornerback Xavier Rhodes exited with an injury in the fourth quarter, but head coach Mike Zimmer didn’t seem too concerned. With the Vikings’ defense playing cohesively, much of the team’s future success will center around the offense managing to make plays.

After starting the first 25 minutes of the game with 12 plays, four yards and zero points, the Vikings’ offense accumulated 322 yards and 24 points during the next 25 minutes. The coaches will need to figure out what’s leading to such lethargic starts offensively. When the team has gotten off to a quick start, everything has clicked on both sides of the ball. Establishing a rhythm is going to be extra important against quality teams like the Bears. With the Eagles’ last-second win over the Texans, Minnesota will need to beat Chicago next week to earn a playoff spot. If Minnesota doesn’t win, Philadelphia must lose to the Redskins.

The Vikings have areas to fix offensively and they must play more disciplined if they want to extend their season. All of the mistakes they made, including penalties will haunt them against some of the NFC’s best talent. If they can’t make adjustments, Sunday’s game against Chicago will become even more of a challenge.
Posted by Daniel House at 5:00 PM