What went wrong for the Vikings' defense in a 38-31 loss to the Rams? 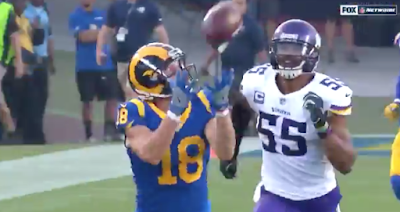 The Vikings' defense was gashed by an explosive Los Angeles Rams offense during a 38-31 loss on Thursday night. Daniel House analyzed the game and explained what went wrong.

Mike Zimmer defenses are rarely gashed for 556 total yards and five passing touchdowns. In fact, no Zimmer defense has ever surrendered this much yardage in a single game. The Vikings were exposed by an explosive Rams offense with an impressive scheme. Minnesota’s offense was forced into a shootout and went toe-to-toe with Los Angeles until the final minutes of a 38-31 loss. Thursday night's performance has left many people scratching their head regarding what has changed for last season’s top defense.

Dive in to find out:

Where did things go wrong defensively?
Despite a strong offensive performance, the Vikings’ defense was filled with mistakes at every level. Coverage breakdowns, miscommunications and poor alignments allowed quarterback Jared Goff to pass for 465 yards and five touchdowns. The tempo, hint of motion and mismatches created by Rams head coach Sean McVay gave Minnesota headaches. Based upon the coverage schemes of the Vikings’ defense, they often had limited safety help. Due to this, McVay managed to isolate linebackers on running backs and wide receivers.

On an 8-yard touchdown pass to Todd Gurley, safety Harrison Smith was splitting the difference to help on the strong side of the formation. McVay ran a route up the seam because he knew Barr would have no help over the top on Gurley.


As for the long 70-yard touchdown to Cooper Kupp, Barr was again isolated. It appears the defense was confused about their man and zone coverage assignments. Cornerback Mackensie Alexander was in zone, but looked as if he was supposed to cover Kupp on the wheel. The Rams understood the Vikings had single-high safety help over the top. They knew if they could create deception underneath, they would have a great mismatch deep. It was almost physically impossible for Barr to cover this because he had no help.

This score, like the first, was the product of successful scheming. Not only that, but Jared Goff was delivering passing with pin-point accuracy at all levels.

The Vikings have had significant trouble passing off coverages this year between linebackers and defensive backs. Pre-snap alignments have shown confusion as well. Mackensie Alexander appeared lost regarding his responsibilities on numerous occasions. The mistakes and miscommunications have allowed coordinators like McVay to create mismatches. Los Angeles primarily runs three wide receiver sets, but they manage to move players all over the field, adjust splits, create deception and use tempo to keep defensive units on their heels. The Rams also tried to draw the attention of the Vikings’ deep safeties to maximize mismatches even more.

Many of the touchdowns were the result of scheming, but Minnesota was unable to make any particular adjustment. Perhaps adding more length and physicality with a three safety look may have helped these issues. They used Jayron Kearse in a nickel role later in the game, and found some success, including a route where he successfully covered Cooper Kupp in the end zone. However, most of the issues that occurred were the result of miscommunications regarding coverage pass offs. It even looked like players were questioning whether they were in man or zone. It wasn’t all Anthony Barr’s fault, especially considering he shouldn’t be placed in situations where he is covering wide receivers one-on-one in space. For the Vikings, getting back to playing disciplined defense is the first way to restore order.

Also, one of the quiet problems with the defense has been the inconsistencies against the run. The Vikings allowed five yards per rush to Todd Gurley and the Rams on Thursday night. This allowed Los Angeles to have extensive success in early downs. Sean McVay had so many options with the Rams in 2-and-5 or shorter situations. Los Angeles had just six third down attempts, which speaks to the Vikings’ inability to place them in long down situations. Minnesota’s defense is at their best when they can stop the run, get teams in long yardage situations and be aggressive. This hasn’t been the case through portions of the first four games and should be a focus entering Philadelphia next week.

Offense showing firepower, but need balance
If the defense can solve any of these problems, the offense has been doing enough to win football games. Quarterback Kirk Cousins was accurate at all levels completing 36 of his 50 passes for 422 touchdowns and three touchdowns. He delivered a beautiful fade to wide receiver Stefon Diggs and looked off the safety deep to hit Adam Thielen for 45-yard touchdown. The Vikings’ receivers were getting open with their releases at the line of scrimmage as offensive coordinator John DeFilippo called a great game. He mixed up the personnel packages often by using two running backs, lining up two tight ends or flexing backs outside as receivers. Diggs and Thielen were winning one-on-one matchups the entire night and Cousins was hitting tight window throws at a variety of levels.

Between Cousins’ accuracy and the wide receiver duo, the Minnesota offense is difficult to defend. Aldrick Robinson also grabbed a pair of touchdowns and would add another element to the offense if he can become a complementary No. 3. The Vikings’ passing game is clicking, but the big concern revolves around the running game. They are averaging just 68 rushing yards per game to open the season. Of course, game situations control how much they can actually run the ball. When teams get behind, opposing defenses can tee-off against the pass and make the offense more one-dimensional. However, if the Vikings want to have more success down the stretch, they can’t continue to rely on Cousins and the passing game to carry them.

Should the Vikings’ offensive line be shuffled?


This is especially the case considering the interior offensive line play is still a question mark. Mike Remmers and Tom Compton struggled in Thursday’s game as the Vikings’ offensive line allowed 29 total pressures, according to PFF. As the game progressed, the performance started to decline. One has to wonder how much of this is the result of fatigue associated with a short week. During the final two drives of the game, the reps by Remmers, Compton and Rashod Hill slowly declined as Rams defensive tackles Aaron Donald and Ndamukong Suh took over. Three sacks, including a fumble plagued the offense down the stretch. With Cousins having such a problem with ball security, the smallest of errors by the offensive line can lead to a turnover. Following the return of center Pat Elflein, Mike Zimmer has indicated the offensive line is set for now. However, it might be worth considering the idea of kicking Mike Remmers back to right tackle (his natural position), while evaluating interior options such as Bryan Witzmann, Danny Isidora and Brett Jones. Nonetheless, at this point, it doesn’t seem like this will happen. The Vikings have ten days to recover and we’ll eventually see how much fatigue and a high volume of pass protection reps impacted the team’s ability to consistently protect in Thursday’s game. One can guess it was a small contributing factor, but the offensive line remains a major question mark.
Posted by Daniel House at 10:27 AM