Notebook: Vikings dominated in a 27-6 loss to the Bills 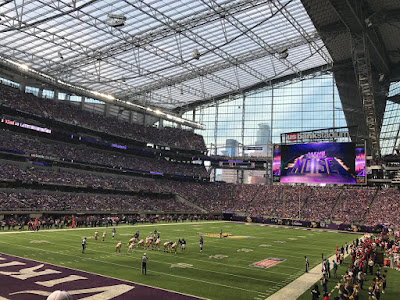 The Vikings were dominated by the Buffalo Bills at U.S. Bank Stadium. A 16-point favorite entering the game, Minnesota had no answer for the Bills’ defensive front in a 27-6 loss.

The Vikings learned there’s never an easy game in the National Football League. If you’re favored by more than 16 points, you still have to execute at a high level. Truly anything is possible when the best athletes are on the field.

The Buffalo Bills dominated the Vikings in every phase of the game during a 27-3 loss. A strong pass rush and several big offensive plays helped the Bills silence the Vikings.

On the first drive, two personal foul penalties negated a three-and-out by the Vikings defense. It helped the Bills fuel a 9-play, 75-yard drive. Quarterback Josh Allen extended plays with his feet the entire day and found the pylon for 10-yard score. Two fumbles deep in Minnesota’s own territory allowed Buffalo to add ten points, including a 26-yard pass from Josh Allen to tight end Jason Croom. The Vikings again had trouble covering tight ends up the seam as Croom was wide-open for an easy score. A quick three-and-out helped the Bills put up another touchdown as the Vikings trailed 27-0 early in the second quarter. Poor tackling, bad alignments and turnovers plagued Minnesota from the beginning.

Left tackle Riley Reiff struggled the entire game as defensive end Jerry Hughes created numerous pressures. Quarterback Kirk Cousins had no time to find options up the field and was relegated to short, underneath concepts. Reiff was backed into Cousins on numerous occasions and the quarterback was forced to release the ball quickly. Each of the strip sacks were also the result of pressure he surrendered off the edge. The entire unit struggled and it put a clamp on what the Vikings could do offensively. On six first half drives, the Vikings posted just 46 total yards, two first downs and averaged just 2.2 yards per play. Credit the Bills for controlling the line of scrimmage and getting after the quarterback. Jerry Hughes was getting after the Vikings’ offensive line and dominated Riley Reiff from start to finish. This was one of the main matchups that tipped the scale.

The Vikings simply could not find anything offensively as the Bills defensive line dominated the line of scrimmage with physicality. Cousins was sacked four times and was hit throughout the day as he tried to find receivers. When he did, he dealt with drops, including one deep to wide receiver, who couldn’t haul in a deep fade. The Vikings were behind immediately and it allowed the Bills to tee off against the pass. Cousins tossed 55 passes as Minnesota carried the ball just six times. He also missed targets all over the field, too. He short hopped a pass intended for Adam Thielen and tossed a deep throw over the head of two wide receivers. When there was an ounce of pressure, he was unable to step up and find options. If he did, his accuracy was way off. Cousins also forced a pass across the middle to Latavius Murray and it was tipped into the air for an interception.

Many of Buffalo’s big plays were the result of players staring in the backfield and losing receivers over the top. A 55-yard reception from Josh Allen to running back Chris Ivory occurred because cornerback Mackensie Alexander and Eric Kendricks had a miscommunication in the second level. When you combine all of that with missed tackles, blown assignments and penalties, you’re not going to win many games. It doesn’t matter how talented the opponent is. The defense was placed in unfavorable situations throughout the day, but they were unable to stand strong and force field goals. Quarterback Josh Allen managed to extend plays and Chris Ivory was picking up yardage in early down situations.

The pass rush was up-and-down throughout the day. Stephen Weatherly had one sack as he replaced Everson Griffen, who was ruled out with a knee injury. Griffen did not attend the game due to a personal matter, according to Mike Zimmer. This situation might be worth monitoring as the Vikings progress forward into a short week.

At the end of the day, a team that surrendered a league-worst 78 points entered U.S. Bank Stadium with a rookie QB and left victorious. The Vikings don’t have much time to reflect as the top team in the NFC, the Los Angeles Rams, awaits on Thursday night.