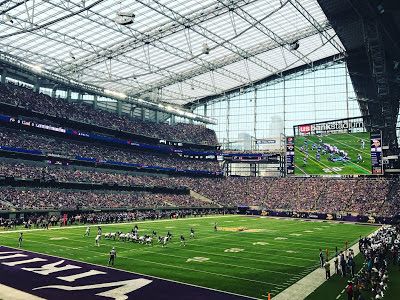 Vikings football returns on Sunday as the Vikings host the San Francisco 49ers at U.S. Bank Stadium. It’s the first chance to see offensive coordinator John DeFilippo’s offense with quarterback Kirk Cousins at the helm. Not only that, but a defense with continuity added weapons like defensive tackle Sheldon Richardson and cornerback Mike Hughes this offseason. The season-opener is the first chance to see all of the pieces come together in regular season action. It won’t be easy for the Vikings as a talented 49ers team led by Jimmy Garoppolo travels to Minnesota. With the game quickly approaching, here are a few specific areas to watch closely.

The Kirk Cousins debut
Sunday will be the first chance to see Kirk Cousins in regular season action as a member of the Minnesota Vikings. The biggest offseason addition will have the chance to play within the full arsenal of offensive coordinator John DeFilippo’s system. The biggest question is how much time it may take for the offense to gel. With a new quarterback and coordinator in the fold, the offense might be an early work in progress. However, a full scheme loaded with a melting pot of concepts and the addition running back Dalvin Cook should help the offensive rhythm. When Cousins is best, he has a clean pocket and time to go through his progressions. He is a very cerebral quarterback and can take advantage of the fact he has a wide receiver duo like Stefon Diggs and Adam Thielen to throw the ball to. This is the first chance to measure the cohesiveness and timing of the Vikings’ offense. One can anticipate the scheme to be creative, which will help place players in the best situation to be successful.

The starting center
The starting center position created quite the stir this week as the Vikings have yet to officially announce who will start at center. With Pat Elflein recovering from injury, Brett Jones is expected to start, per Ben Goessling at the Star Tribune. This likely signals Tom Compton will play at left guard for the being – at least until Elflein returns in the coming weeks. The question then shifts to whether Jones slide over to left guard and fills a role similar to Joe Berger’s. It feels like the best possible scenario, however, it’s worth evaluating Compton’s performance this week against 49ers defensive tackle DeForest Buckner. Early in the week, Brian Baldinger reported Danny Isidora would start at center, despite playing just one game at the position. It was later determined this was potentially incorrect. At this point, nobody will likely know who is starting at center until warm-ups on Sunday. That’s exactly how head coach Mike Zimmer likes it. As I explained earlier, the performance of the offensive line is going to hold the keys to many things the Vikings can do offensively in 2018.

Minnesota’s defensive line in action
The addition of Sheldon Richardson is still exciting and has the chance to quietly be a very underrated addition. People who were concerned about his performance in the Seahawks preseason game didn’t understand that Seattle game planned to attack Sheldon Richardson via quick traps. The Vikings can make specific scheme adjustments during games, such as having Richardson use a slip technique. However, there was no need to do that in a preseason game. The idea of Richardson and Linval Joseph inside with Danielle Hunter and Everson Griffen on the edge, is an exciting thought. This will be the first opportunity to see all of them together in a complete scheme. The matchup to watch closely in this game will be Everson Griffen vs. veteran left tackle Joe Staley. Getting after Jimmy Garoppolo will be important if the Vikings want to leave with a victory.

Controlling Jimmy Garoppolo and 49ers’ weapons
In the late stages of the season, Jimmy Garoppolo joined the 49ers and the team finished 5-0 over the final five games. He tossed for 1,560 yards and seven touchdowns during that timeframe. His adjusted accuracy percentage (71.4%) ranked second behind Drew Brees, according to Pro Football Focus. Garoppolo is particularly solid in the intermediate passing game and can fit passes into tight windows. With an emerging Marquise Goodwin and veteran Pierre Garcon, there are weapons available. Goodwin is a speedy option with a quietly evolving route tree. Cornerback Trae Waynes will be tasked with keeping track of Goodwin. Both of their skill-sets align well, especially considering they feature speed as one of their key traits. Goodwin has the chance to evolve into a top option in San Francisco and showed plenty of chemistry with Jimmy Garoppolo during the preseason.

The pass rush will need to get after Garoppolo to potentially force him into mistakes that impact San Francisco’s offensive rhythm. Last season, he had a 63.3 passer rating when under pressure, according to Pro Football Focus. This is a key stat to keep in mind as the Vikings likely scheme to put heat on Garoppolo. With running back Jerick McKinnon suffering a season-ending ACL tear last week, it changes the balance of the 49ers’ offense. Young running back Matt Breida and journeyman Alfred Morris will be tasked with filling in for McKinnon, who was certainly going to be a key part of the offense.

Mike Hughes could see extended playing time
Rookie cornerback Mike Hughes has quietly become one of the biggest additions to the Vikings’ defense. He is likely going to contribute in the secondary and as a kickoff returner. Hughes might see extend action on Sunday if Mackensie Alexander (ankle) is unable to play. The way Hughes picked up the technique and system has been impressive. He was handling the Vikings’ top receivers in practice during training camp. It showed how skilled Hughes is as a player.

If he plays at a high level immediately, he may be a player the Vikings simply can’t take off the field. His speed, transition quickness and playmaking ability will be an important addition to the Minnesota defense. With 10 of the 11 starters returning to the defense, the continuity and additions of Sheldon Richardson and Mike Hughes will make the Vikings’ defense a major force in 2018. Sunday is the first look at a unit with plenty of weapons.
Posted by Daniel House at 11:14 AM