Notebook: Vikings defense turns up the heat, Cousins flashes in a 24-16 win 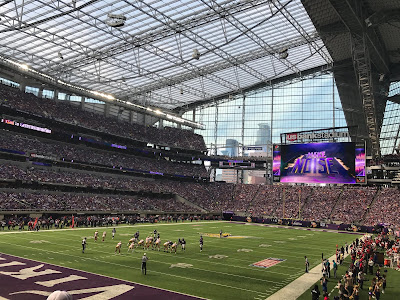 A strong defensive performance helped the Vikings hold off the 49ers for a 24-16 win. Daniel House takes you inside his notebook to discuss some of the strengths and weaknesses.

The Vikings’ defense showed why they will again be one of the toughest units in the league. A strong effort up front, combined with four takeaways helped Minnesota fight off the 49ers for a 24-16 win. The offense made enough plays to win behind several difficult throws from quarterback Kirk Cousins, who finished the afternoon 20-for-36 for 244 yards and two touchdowns. He delivered two difficult tight window passes to wide receiver Stefon Diggs and Kyle Rudolph for scores. The offense struggled to sustain drives during stretches of the game, but everyone witnessed the flashes of potential. With a dominant defense, the Vikings’ offense needs to score 20 points and they will be in the conversation to win most games.

The Vikings’ defensive line was causing disruptions the entire afternoon. Defensive end Danielle Hunter had numerous reps where he backed the tackle into the quarterback or released and caused a pressure. Hunter was dominant through the day, tallying a sack and four total tackles. He also had a fantastic tackle for loss where he pursued the play across the line of scrimmage. Hunter has improved many facets of his game and was an integral component of the Vikings’ pass rushing success. Defensive tackle Sheldon Richardson was also disruptive, posting six combined tackles and three quarterback hits. He tossed the right guard to help defensive end Everson Griffen finish a first quarter sack. In the running game, he long-armed the guard and stopped a run for no gain. His presence inside opens opportunities for the entire front-four to get after the quarterback. The Vikings finished the day with three sacks and forced 49ers quarterback Jimmy Garoppolo into a few mistakes, including three interceptions.

The secondary was shuffled frequently as cornerback Trae Waynes went down with a knee injury in the first half. With cornerback Mackensie Alexander already out, rookie Mike Hughes was thrust into action. He stepped up in a big way and proved he should continue to see starting action. Hughes corralled a pick-six in the third quarter, stepping in front of an ill-advised Jimmy Garoppolo pass. He also had an excellent pass breakup on a 3rd-and-6 pass in the red zone. He was beaten over the top once for a big gain, but held up really well in his NFL debut. The Vikings were very thin for stretches of the game and even used Jayron Kearse in the nickel package. Holton Hill rotated into the mix for a few snaps, too.

The big thing: the secondary still managed to make plays. Last year, the Vikings’ defense was dominant, but they didn’t close nearly as many of the takeaway opportunities. In this game, the Vikings forced a fumble and grabbed three interceptions. Cornerback Xavier Rhodes hauled in a difficult grab behind the wide receiver and Harrison Smith stepped in front of an errant Garoppolo pass to put the game on ice. Smith also grabbed a key fumble recovery with the 49ers at the goal-line ready to score. The strip and recovery was a huge turning point in the game and allowed Minnesota to hold the 49ers to just three points in the first half. If the Vikings can continue to create takeaways, it would add another element to the team’s defense. The offense can then take advantage of a short field and complete scoring drives. Many of the takeaways in this game were the result of collapsed pockets where Garoppolo tossed an errant pass.

Heading into next week, the Vikings must improve their ability to defend play-action roll-outs, which feature an underneath drag concept. Tight end George Kittle was racking up yardage off this play. The team also struggled with wheel routes and deep passes across the middle to the 49ers’ tight ends. One of them was a poor coverage play by Ben Gedeon, who was beaten over the top. The linebackers and cornerbacks were confused in the back end when passing things off. Many of these issues were related to play design by head coach Kyle Shanahan, which caused a ton of deception. This is something worth watching back on film and will be important next week as the Vikings scheme for Packers tight end Jimmy Graham.

The Vikings’ offense stretched past the 50-yard-line on several occasions, but were unable to sustain the drives. Some of this was attributed to pressure off the left side, a lack of rushing success in early downs and a hint of timing issues vertically. The offensive line was inconsistent as DeForest Buckner posted three sacks and bullied the interior of the Vikings’ offensive line. However, the team managed to put together a few quality drives, aided by accurate Kirk Cousins throws and a glimmer of time provided by the offensive line. Cousins proved when he has time to throw, he can distribute the ball accurately at all levels. One of his two most impressive throws came off a tight window fade to wide receiver Stefon Diggs, where he placed the ball perfectly for a 22-yard score. He also found tight end Kyle Rudolph up the seam for an 11-yard strike. He drove the pass over the top and again slid it through a tight window. Not only that, but he flashed a little improvisation as he left the pocket and side-armed a third down strike to David Morgan. What one saw from Cousins is the ability to make four or five throws per game that many passers cannot execute. With a talented core of receivers that can make a variety of plays on the ball, this is a great skill to have.

Cousins completed 20 of his 36 passes for 244 yards and a pair of touchdowns. He didn’t make mistakes, but the offense still needs to continue gelling. He missed an open Adam Thielen vertically on a play where the timing appeared to still be slightly off. There were a couple throws where this was the case, especially when he pushed the ball up the field. However, you saw the flashes of what can occur when the offense is firing on all cylinders and clicking. If the Vikings can protect more consistently and run the ball better on early downs, it will also help the offense develop more variety and consistency.
Posted by Daniel House at 4:47 PM