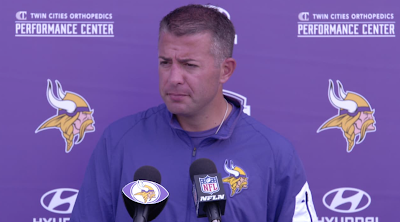 Vikings offensive coordinator John DeFilippo is preparing to call plays during his first season in Minnesota. Find out what he'll be watching for when the team kicks off preseason action on Saturday.

DeFilippo will begin calling plays for the second time in his career as the Vikings open the preseason on Saturday in Denver. The new coordinator previously spent one season in Cleveland organizing and orchestrating a complete scheme.

As a new offense comes together, DeFilippo will be testing a variety of players in various situations against another team. After practicing against the same defense for a few weeks, it will be a valuable way to evaluate key positon groups, such as wide receiver, offensive line, and tight end. Denver will also play more man coverage than the Vikings deploy, which will provide a test for the Vikings’ pass catchers.

“I’m really excited to watch some of young wide-outs and tight ends get off of press coverage,” DeFilippo said. “They’re playing a little bit more man than we are.”

The offensive coordinator wants to see the lower portion of the wide receiver depth chart in live action, too. With so many reps in a similar environment and situation, playing against another team not only tests the team physically, but mentally.

“They’ve been doing a nice job out here, but it’s different when you’re going against somebody else and for a lot of these guys, it’s going to be there first NFL action,” DeFilippo said. “Will they forget their technique? That’s what you see a lot in young players. They’ll come out here where it’s a comfortable environment, they know the fields, they know the locker room and all the sudden a different colored jersey shows up in front of them and they forget every single technique they’ve been taught.”

DeFilippo will be on the field calling plays for at least the first preseason game. It will be a trial run as the coordinator decides which method is best for the entire team. In Cleveland, DeFilippo called plays from the sideline and liked having the ability to interact with players.

“You get to talk to the quarterbacks down there. I think you get a better feel for the pulse of the team when you’re downstairs,” he said. “Now, that being said, your vantage point is not as good as it is upstairs, but we are very fortunate to have some really good coaches on our offensive side of the ball that are going to be able to provide information and know what we are trying to look for in terms of attacking the defense.”

As the Vikings prepare for their first preseason game, they’ll be without three offensive linemen due to injuries. Guards Mike Remmers and Nick Easton remain sidelined and center Pat Elflein is rehabbing on the physically unable to perform list. With so many starters out, DeFilippo said certain aspects of the scheme might change because of absences, but he’s feeling confident about the progress of young players up front.

“I think you have to protect your guys. We’ll know very early how we’re holding up up front,” he said. “I anticipate us holding up really, really good, because we’re playing a darn good defensive line out here and holding up pretty good.”

“I’m really proud of how are young guys have stepped up up front. It hasn’t been perfect, sometimes it’s not 100 percent fundamentally, it turns into a little bit of a street fight, but obviously the toughness factor is there.”

As young linemen are thrust into starting roles, DeFilippo recognizes the importance of developing the best possible protection schemes to counteract any talent discrepancies. For him, it’s about taking things from the meeting room to the field.

“I think there’s going to be certain times where you use certain protections to help people,” he said. “I think you have to do that and that’s coaching. You just don’t go throw a guy out on an island and expect them to go block Von Miller 1-on-1.”

As DeFilippo prepares to call plays again, he is taking everything he learned from a one-year stint in Cleveland and applying it to the same role in Minnesota. Past experience has taught the offensive coordinator what’s important when leading an offense.

“The first time you do it, you want everything to be so perfect – every single little detail,” he said. “That doesn’t mean we don’t want that now. I feel like Coach Zimmer and I communicate very, very well and I know kind of what the important things are to stress and what kind of stuff to lay off on.”

Cousins describes the Vikings’ defense through his eyes

Quarterback Kirk Cousins spoke with the media during Wednesday’s availability and provided insight into what it’s like playing against the Vikings’ top defense in practice. For him, the continuity is what elevates the entire unit above others in the league. Here’s the complete quote:

“I think the first thing that comes to mind is just their continuity. If I make a check, they make a check, because they are on the same page. One time in OTAs, and I believe you were all here this day, I saw they were bringing a pressure. I made a check to have an answer, well, they then checked to get out of the pressure, so then I was left stuck with a play that’s not very good versus their max zone coverage. And I went over to Coach Zimm afterwards, and I said, ‘tell me a little bit about what is going on there’ and he said, ‘well, they’re not supposed to do that. They were supposed to leave the play on, but they’ve been playing together for so long and they’re so dialed in that even if the play clock’s running down and if you’re getting your check out quickly, they know -- one hand signal, one word and everybody knows what to do.’ I think that’s the hard part because when you have a brand new quarterback, brand new offensive coordinator, we can’t say the same thing on offense. The continuity in addition to all the talent they have, I think helps them play at a high level.”
Posted by Daniel House at 1:32 PM