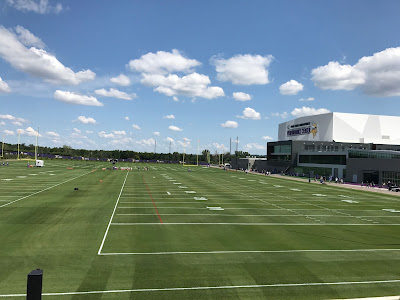 The Vikings returned to the field for another practice session at TCO Performance Center. Daniel House takes you inside another edition of his training camp notebook.


The Vikings returned to the field for another practice session at TCO Performance Center. It was a day filled with 11-on-11 action and plenty of 1-on-1 battles up front. The defensive line continues to win some battles, but younger players are putting together a few positive reps on the offensive line, too. With so much uncertainty up front, the inexperienced options up front will be tested during the preseason and joint practices with Jacksonville. For now, here’s a look at a few observations from Tuesday’s practice.

Alexander and Rhodes making plays
The defensive backs won a few battles in Tuesday’s afternoon session. Mackensie Alexander had two great pass breakups in the 1-on-1 DB/WR drills. One came against Kendall Wright on an intermediate route toward the sideline. The second was an excellent interception on a Kyle Sloter out intended for Korey Robertson. Robertson was unable to gain separation and Sloter’s pass was fired errantly outside and into the arms of Alexander. Sloter has been up-and-down throughout camp and looks like he’s still trying to learn the system, while growing mechanically.

In the red zone drill, Alexander also knocked away a corner route intended for Adam Thielen. He was in excellent position and stuck his hand into the passing lane to create a breakup. Alexander has been very confident during training camp and has managed to be disruptive throughout numerous sessions.

Cornerback Xavier Rhodes also had two interceptions during various sessions in practice. Kirk Cousins tried to connect with Adam Thielen deep, but Rhodes managed to use a little physicality to adjust and get into the passing lane. In addition, Rhodes also finessed Stacy Coley on quick slant during a 1-on-1 drill. Over the past two days, Rhodes has been making plays against the likes of Thielen and Stefon Diggs.

However, the highlight of the day came when Diggs beat Rhodes deep for a long touchdown reception. The pass was perfectly placed by Kirk Cousins for a big gain. Diggs ran into the end zone and tossed the ball deep into the stands to celebrate.

Zylstra is making his mark
Brandon Zylstra made a fantastic adjustment in traffic to haul in a pass outside his frame during the 1-on-1 drills. He has displayed excellent hands and an ability to get his body in position against numerous defensive backs. Zylstra’s role continues to suggest he is in the conversation for a roster spot, especially since he is featured prominently on special teams. He was rotating into the starting wide receiver mix during portions of practice and is beginning to separate himself from the competition.

Offensive line is hard to judge….right now
The defensive line was getting plenty of pressure during the early stages of the team drills. Danielle Hunter and Everson Griffen were winning consistently off the edge. However, there were moments where Riley Reiff and Rashod Hill completed positive reps, too. It’s hard to evaluate the offensive line right now because for every poor snap, there are a few positive ones to follow it up. You can certainly see the combination of defensive line talent and inexperienced offensive linemen blurring the true perception of the unit. Again, the preseason and joint practices with the Jags will paint a clearer picture of exactly where everyone is at.

During the 1-on-1 drills, there were several positive reps from Brian O’Neill. He won twice against Brian Robison with a strong anchor and great hands. In the next set of reps, he split battles with Sheldon Richardson. The first one he recovered nicely and got in great position. On the second occasion, Richardson dominated with a quick first step, causing O’Neill to trip over his feet. This is the theme with O’Neill when you watch him closely in camp. For every few positive reps, there are several where he really struggles. It’s to be expected as he tries to become more experienced and fundamentally sound. However, he is much better than he was early in camp and is tested every day by Danielle Hunter, which will serve him well.

Aviante Collins was also fantastic in both the team and 1-on-1 drills. He handled Stephen Weatherly twice and stone walled Ifeadi Odenigbo, who was performing very well in the drill against other options. Collins’ hand technique is noticeably improved and he told me after practice he has added considerable weight since arriving in Minnesota. According to Collins, he’s finally at 300 pounds. He has always played with a mean streak, but the technical refinement has helped him elevate to another level. Danny Isidora won a pair of reps against Sheldon Richardson and displayed a strong anchor and inside hands. He has been putting together a relatively strong camp and will be asked to step up if Nick Easton is sidelined for an extended period of time.

Jaleel Johnson dominated both of his reps against Tom Compton during 1-on-1 drills. He drove Compton off the ball in the first rep and then followed it up by winning with speed to power on the next snap. Johnson has progressed nicely in his second year and was blending in with the first-team unit while Linval Joseph sat out practice. He has the flexibility to play both three-technique and nose tackle, but it’s clear he is more natural in the pass rushing capacity.

Cornelius Edison also won multiple reps against David Parry and has continued to perform well in the 1-on-1 situations. With so much uncertainty up front, it will be worth watching Edison closely in the preseason.

Kickers aren’t tested much on Tuesday
During the one kicking portion of practice, Daniel Carlson was brought onto the field during an “end of the half” drill. He made the field goal from 39 yards out. It was the only session where a kicker was tested during the team sessions. Otherwise, the kickers worked on technique over on the side field for a large portion of practice.


Linval Joseph was a new addition to the absence list. He was in shorts and only participated in the team stretch period. Guards Mike Remmers, Nick Easton and wide receiver Tavarres King remained sidelined, while Chad Beebe and Roc Thomas participated on a limited basis.

For a fun feature with rookie running back Mike Boone, click this link.