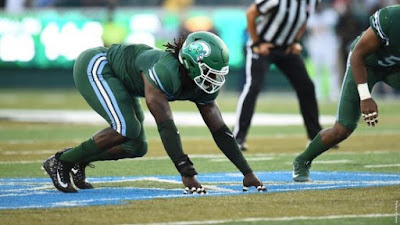 The Vikings have selected Tulane defensive end Ade Aruna with pick No. 218.


The Vikings have selected Tulane defensive end Ade Aruna with pick No. 218.

Aruna was originally a basketball player from Nigeria, who moved to America in hopes of claiming a college scholarship. Instead, he followed the football path after being convinced by an AAU coach. He didn't even tell his parents he was going to play the sport in college.

"I didn't tell right away I was playing football until I signed my letter of intent to go to Tulane," Aruna said.

Over three seasons, Aruna tallied 100 tackles, 10 sacks, and three forced fumbles. He possesses unique physical traits, including impressive broad and vertical jumps, along with a 4.6 40-yard dash at 262 pounds. He doesn't have the three-cone and 20-yard explosiveness the Vikings usually value, but he certainly has flexibility and leaping ability. 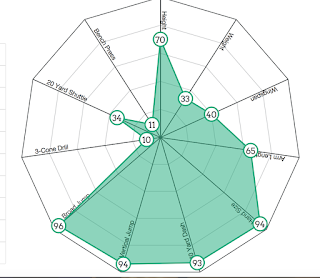 He trained with former Vikings defensive lineman Keith Millard this January in California.

"He taught me most of everything I needed to know," Aruna said. "It was a great opportunity for me to get with somebody like him to kind of know what it is to play D-Line and be a pass-rush specialist."

Based upon Aruna's testing, it is easy to tell Aruna was a basketball player because of his physical composition. He even played against Timberwolves player Andrew Wiggins in a game. Wiggins scored 11 points in the game, but Aruna thought his defense was better.

"I think he only scored about six points," Aruna joked.

Overall, Aruna is rough around the edges, but he is another player who could develop with the instruction of defensive line coach Andre Patterson.