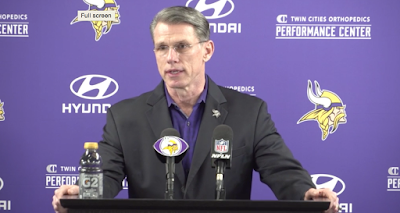 Rick Spielman addressed the media following the 2018 NFL Draft and discussed all of the needs his team managed to fill.

The Vikings drafted with one main theme in mind this year – athleticism and upside. Jalyn Holmes, Ade Aruna, Mike Hughes and Brian O’Neill are just a few examples. It’s something the coaching staff and front office was evaluating closely.

“The theme was again sticking with the athletic traits we’re looking for and relying on this coaching staff to develop a lot of this young talent,” GM Rick Spielman said. “A lot of the traits they have you can’t teach, you can’t coach, but you can sure develop them.”

The goal is to add talent that can help the roster and provide competition. With a strong coaching staff developing talent, Spielman knows the team can draft prototypes.

“We know that we have some pretty good athletes that are coming in the building. Now it’s a matter of seeing how quickly we can get them to develop.”

The Vikings drafted Auburn kicker Daniel Carlson in the fifth round, creating a competition with veteran Kai Forbath. At the time, Carlson was one of the highest rated players on the board. Special teams coach Mike Priefer worked him out privately and the team felt comfortable trading up to selecting him.

“The decision was made because we were following our board,” Spielman said. “I know Coach Priefer spent a lot of time going through this just like every position.”

Entering the draft, a priority for the Vikings was to land a mismatch tight end that could stress all three levels of the defense. Central Michigan tight end Tyler Conklin fit the traits the coaching staff and specifically offensive coordinator John DeFilippo, were looking for. A red zone warrior with great hands, Conklin will likely be one of the drafted players who could make an impact next season.

‘You can do a lot of things with him,” Spielman said. “He has tremendous hand-eye coordination. You see all of those traits you can develop into a potential mismatch guy.”

A hidden gem at defensive tackle

They clocked Holmes at 4.77, which was very impressive for a player with all of his measurements. It was quickly determined Holmes was a player on the team’s radar.

The third round pick is definitely a player who could rotate into a defensive line searching for capable rushers.

The Vikings selected Colby Gossett in the sixth round, addressing the need inside on the offensive line. Many analysts projected he would be selected in the fourth or fifth round, but the Vikings swiped him in the sixth. Spielman was pleased they were able to land him at this stage of the draft. Pairing Gossett with second-year guard Danny Isidora and free agent signing Josh Andrew leaves the team feeling more confident about the offensive line.

“I know we liked him down at the senior bowl – tough kid,” Spielman said. “I also know we have some guys currently on this roster we’re excited about.”

Outside of the drafted talent, the Vikings reportedly have been very aggressive while signing undrafted free agents. Spielman said the team saw plenty of talent available when the draft ended and wanted to swipe up players they coveted.

“I think when we finish up this college free agent draft, I think a lot of those guys were draftable,” Spielman said. “I told those guys upstairs, do not spend any more money until I get back up there.”