For Vikings CB Mike Hughes, losing isn’t in his DNA 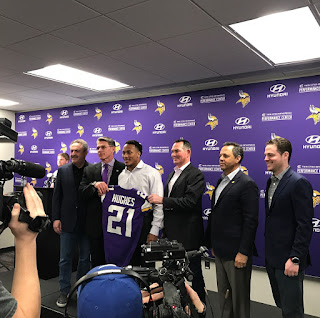 For Vikings CB Mike Hughes, losing isn’t in his DNA. It's something that hasn't happened since his freshman season.

Vikings cornerback Mike Hughes isn’t accustomed to losing. It’s something that has fueled his competitive fire since he was a young football player. The Vikings’ first round pick hasn’t lost a football game, dating back to his freshman year in college. Last year, his team finished a 13-0 season with a win in the Chick-Fil-A Bowl.

“Losing is not really in my background,” Hughes said.

Hughes has only been playing the cornerback position for three years and is beaming with upside. The cornerback likes the idea of playing within a scheme which emphasizes man-to-man coverage and player development.

“I think this staff will do a great job of polishing me at corner. I’m looking forward to learning from [the other cornerbacks],” Hughes said. “I think being here for a long period of time will definitely help.”

When Hughes sets foot on the practice field, he likes to live up to his high school nickname “Big Mike.” It’s a phrase his teammates use to describe him when he was freshman in high school. Now, he will apply it to the cornerback position in a Vikings’ defense, which fits his skill-set. One of Hughes’ strengths is playing man-to-man coverage, something he’ll be asked to do plenty in Minnesota.

“Obviously, man-to-man [is similar], a lot of man-to-man,” Hughes said. “I think that’s one of my greater strengths is being a cover corner. I’m looking forward to do that.”

After leaving the North Carolina football program, Hughes has put himself in a position to grow personally and professionally. Last season was the first step in that process as he joined Central Florida just weeks before the season. For Hughes, it started by being around people and teammates who helped ease the transition.

“Just surrounding myself around great people,” Hughes said. “People who I kind of learn life lessons from. Just being aware of my situations and just being around important people who will make me more successful.”

Despite his 5-foot-10 stature, it’s the physicality and short range quickness, which separates Hughes from other cornerbacks, according to head coach Mike Zimmer. Not only that, but competitive fire and physicality are two traits Hughes takes pride in as a cornerback.

“Just being physical, not playing to your size,” Hughes said. “I hate having the ball caught on me, even in practice.”
Posted by Daniel House at 6:01 PM