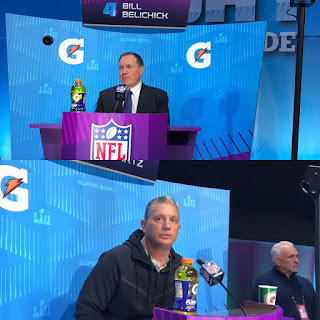 When the Super Bowl begins on Sunday, two coaches off the same “tree” will meet in a clash for the the most coveted prize in sports. Find out why the matchup of the game might occur between teacher and former student.

When the Super Bowl begins on Sunday, two coaches off the same “tree” will meet in a clash for the the most coveted prize in sports. New England Patriots head coach Bill Belichick will scheme against Philadelphia Eagles defensive coordinator Jim Schwartz.

Schwartz served as a research assistant and scout under Belichick in Cleveland during the 1990s. The young assistant elevated from being a coordinator to a head coach during five stops in the league. Now, on the biggest stage, he has the chance to coordinate the Eagles’ defense against his mentor.

Schwartz said he mastered how to coach by watching Belichick’s preparation and work ethic. He learned that operating team centered about details and having players in the best situations to be successful.

“The biggest thing is preparation. Bill taught us that everything that touches the team is important,” Schwartz said during Super Bowl media night. “[He said] there’s no detail that is unimportant and that we need to plan for every possibility. He worked an awful lot of hours and realized that it doesn’t come easy in this league.”

Those hours are something Schwartz uses when he coaches the Philadelphia Eagles’ second-ranked unit. Placing players in a position to be successful is something the coach learned from his early beginnings with Belichick in Cleveland. Schwartz noted how scheming is separate from calling a game that suits your players’ skill-sets.

“You have schemes that you want to run; schemes don’t stand on their own. It’s about the players you have and trying to do what they can do,” Schwartz said. “I think it’s a little bit like being a catcher and calling a game for a pitcher. You can call for a fastball all you want, but if he doesn’t have the fastball that day or isn’t a good fastball thrower, you are not going to call a good game.”

Schwartz focuses on those details as he schemes for every opponent. When Schwartz was around Belichick he learned how to construct a detailed gameplan, while being prepared for every possible situation. It’s something he’ll focus on when he schemes against a talented Patriots team coached by his mentor.

Belichick said Schwartz has been the same coach during his 21-year coaching career. It’s why he knows his team must be ready for a plethora of in-game adjustments and wrinkles thrown their way. With both coaches having an extra week to prepare, the matchup between New England’s high-powered offense and Schwartz’s defense might be the storyline of the game.

The things Schwartz learned from Belichick and the impression he made in the league helped him earn a recommendation in 1999 when Titans head coach Jeff Fisher was searching for a defense coordinator. He was hired and never looked back, en route to becoming a head coach in Detroit and the eventual defensive coordinator for one of the league’s top defenses in 2017.

“I owe a lot of that to Bill and the preparation and the detail he showed shaped how my career went and a lot of others,” Schwartz said.

If Schwartz hadn’t worked with Belichick for three years starting in 1993, the Super Bowl 52 matchup may have never happened.

This time, the mentor will meet the former student as New England tries to earn their sixth title of the Tom Brady-Bill Belichick era.
Posted by Daniel House at 10:58 PM