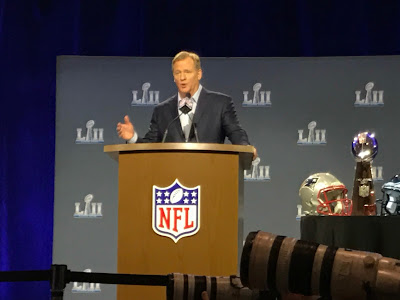 Commissioner Roger Goodell said the league will be evaluating the catch rule this offseason to provide more clarity.

NFL commissioner Roger Goodell said the league will be spending plenty of time with the rulebook this offseason.

The NFL has faced scrutiny over the catch rule and the exact meaning of maintaining possession through the ground. It became a major talking point following the reversal of Steelers tight end Jesse James’ touchdown in a 27-24 loss to New England. Goodell said the league is noticing the frustration and believes this offseason is an opportunity to “get it right.”

“A lot of focus this offseason is going to be on the rulebook -- the catch, no catch rule, officials are officiating that correctly,” Goodell said during his pre-Super Bowl press conference. “We have a great opportunity to get it right.”

Goodell has met with former players, including Hall of Famers to discuss ways to improve the rule. They watched more than 150 plays to discuss potential changes that could be made. He said there is even disagreement among the players as to what constitutes a catch. According to Goodell, the goal is to have a plan ready to present to the competition committee this spring. The help of former players will be taken into consideration as the NFL makes changes.

Goodell noted the goal will be to “start over” when tweaking the catch rule, rather than editing the current language. In the end, the league will need to provide officials with a clear process for determining a catch. He said this will start by evaluating the completion through contact with the ground. Goodell is aware the league must determine a ruling for finishing a catch.

“There will be a lot of focus on going to the ground,” Goodell said.

The call must be definitively made during video review, but Goodell noted the review process will also be analyzed to improve the overall pace of games. This year, he felt the league’s review process was too long and led to interruptions. However, he said the officiating on the field has been “outstanding.” The main area the league will look to improve this offseason is the rulebook to make their jobs easier. No rule stands out more than simplifying what constitutes a catch for players, coaches and fans.

The offseason is a big chance to patch the rule and reduce the controversy associated with important games next season. Goodell’s meeting this spring with the competition committee is the first step toward making wholesale changes to the game.
Posted by Daniel House at 2:14 PM