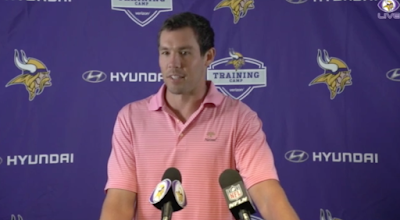 The Vikings veterans moved into Julia Sears dorms on the Minnesota State-Mankato campus Wednesday. Several players and staff spoke with the media regarding the upcoming season and training camp. Daniel House provides a recap of Wednesday's Vikings news.

The Vikings veterans moved into Julia Sears dorms on the Minnesota State-Mankato campus Wednesday. Several players and staff spoke with the media regarding the upcoming season and training camp. The team also announced a contract extension for defensive end Everson Griffen Wednesday morning.

For more, here's some notes from the Wednesday's happenings:

Griffen reaches a four-year extension with the Vikings
The Vikings have announced they reached a four-year extension with defensive end Everson Griffen. Griffen, 29, a versatile spark plug on the Vikings' defense is an integral player in head coach Mike Zimmer's defense. He was under contract for two more years, but the Vikings wanted to lock him down before they signed other young players. He was scheduled to make $6.9 million this year and $8.4 million in 2018. According to Ian Rapoport of NFL Network, the deal is worth $58 million with $34 million guaranteed. The previous two years of Griffen's contract will likely be adjusted under the new terms of the deal. However, this hasn't been confirmed yet.

He transformed from punt gunner specialist during the 2010-13 seasons to one of the best defensive ends in football. Since joining the starting lineup in 2014, Griffen has recorded the fifth-most sacks in the league (30.5). He has been one of the Vikings' most dynamic weapons on a defense that predicates itself on getting after the quarterback.

Griffen spoke with members of the media as the Vikings veterans moved into the dorms in Mankato for training camp.

"This means I'm a Viking for life," Griffen said. "Something special is going to happen here."

The Vikings will now turn their attention to extending cornerback Xavier Rhodes in the coming weeks. In the future, the team will need to craft space to extend linebackers Eric Kendricks and Anthony Barr, along with defensive end Danielle Hunter. In addition, the quarterback situation will need to be addressed sooner rather than later. The Griffen deal will likely alleviate cap space to make these deals easier, especially if a portion of the deal is front loaded. GM Rick Spielman said the team is working on extensions with "a few guys," so more deals could be imminent.

Vikings sign cornerback Sam Brown
Mike Zimmer indicated the Vikings need more depth at cornerback. The team added a new cornerback to the roster Wednesday. They released offensive tackle Arturo Uzdavinis to make room for Missouri Western State cornerback Sam Brown. Brown joins the Vikings after spending time with the Baltimore Ravens during the 2016 offseason. Following his pro day, he was listed at 6-foot-1, 180 pounds and ran a 4.5 40-yard dash time. There isn't any film to evaluate Brown, but he tallied 123 total tackles and six interceptions during 45 career games at Western Missouri State. He will provide the Vikings with another cornerback to evaluate during the next stage of training camp.

"Going through the spring we were trying to find some new things that maybe we could add to our playbook," Bradford said. "Once we find what we feel like will be our identity, and what we are going to do, just fine tuning that and making sure we are as sharp as we can be with that."

He said there are some differences between former offensive coordinator Norv Turner and current play-caller, Pat Shurmur. He explained the verbiage in the huddle is different, but a noted a few philosophical changes.

"We got away from some of the seven step drop stuff from under center," Bradford said. "I think this year, hopefully, we can be a little bit more balanced with some of the quick game, some of the deeper shots down the field, maybe incorporate more play action."

Bradford also indicated the team will have a talented backfield to use in a variety of ways. However, he noted running back Jerick McKinnon could be a strong asset out of the backfield in 2017.

"The fact that we do feel comfortable with him running routes from the backfield or splitting him out wide if we go empty, I think we can do a lot of different things with him," Bradford said.

The Vikings used McKinnon more as a receiver at the end of last year and it might be the best way to garner his complete skill-set. Bradford obviously feels like McKinnon can perform positively in that role.

Spielman provides an update on Bridgewater
Quarterback Teddy Bridgewater has yet to speak with the Twin Cities media since suffering a knee injury last August. That will change Thursday as Bridgewater is set to address the media following the morning walkthrough. GM Rick Spielman discussed Bridgewater's status Wednesday during his first training camp press conference.

"We haven't been able to see him since he's left," Spielman said. "I know he had a positive report from his surgeon."

Late Wednesday, the Vikings placed Bridgewater on the Active/PUP list to continue rehabbing his injury. He will be activated when he is medically cleared to practice.

The Vikings have a looming decision at quarterback, but the resolution will likely be prolonged as Bridgewater recovers from surgery. It doesn't worry GM Rick Spielman, who is pleased with the outlook at the position.

"We're fortunate to have two quarterbacks like that on our roster," Spielman said.

The team will move forward with veteran Sam Bradford until Bridgewater is healthy enough to return.

Vikings practice moved indoors
The Vikings were scheduled to practice for two hours Wednesday, but rain forced the young players indoors. Practice was switched to a 40-minute walkthrough session and was closed to the public. The veterans have now reported to training camp and the first full-squad practice will be tomorrow.