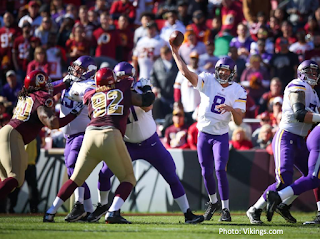 The Vikings traveled to the nation’s capital for a huge game with the Washington Redskins, but fell short, 26-20. Daniel House give his in-depth analysis as the Vikings dropped their fourth straight game.


The Vikings traveled to the nation’s capital for a huge game with the Washington Redskins, but fell short, 26-20. The Redskins jumped out to a 14-point lead, but the Vikings answered with 20 points in the second quarter to take a 20-14 lead at the half. Kicker Blair Walsh missed another extra point just before halftime, which seemed to quietly deflate the energy of the team. The Vikings couldn’t do anything on offense in the second half. They failed to score a point and couldn’t pick up short yardage again. The defense tackled poorly, but still managed to allow only four field goals in the second half. Minnesota had a chance to equalize the game, but on the second-to-last drive, quarterback Sam Bradford was intercepted by Preston Smith. It gave Washington the ball and led to a field goal, which extended their lead to 26-20 with 2:31 left. The Vikings offense drove up the field, but Sam Bradford took a costly sack and the drive ripped at the seams. Minnesota dropped their fourth straight game after starting 5-0 this season. There are many areas where the Vikings must improve if they want to get the season back on track.

For an in-depth look, take a dive inside my notebook:

Bradford’s day capped by an interception
Sam Bradford was efficient, completing 31 of his 40 passes for 307 yards and two touchdowns. He made some difficult throws when he stood tall in the pocket and delivered passes to his receivers. However, his performance will be overshadowed by an interception and a sack he took on the final drive of the game. His most costly mistake came when he looked down Adam Thielen and the pass was intercepted. Preston Smith made a fantastic one-handed interception that gave the Redskins the football back. Washington added a field goal which gave them a six-point advantage with 2:31 left. The Vikings had a chance to win the game on the final drive, but Bradford took a sack that ran time off the clock and set the team up in a long down situation. Bradford played well enough for the team to win and the Vikings’ inability to run the ball puts a huge amount of pressure on him to create plays.

Short yardage rushing is still a problem
It is time to start questioning what is going wrong with the Vikings’ running game. They again struggled in short yardage situations and the running backs have to scratch and claw to even get a yard. The offensive play calls were predictable in these situations and the inside runs that were called have been ineffective all year. Matt Asiata hasn’t been able to pick up a yard because he has limited push up front. The Vikings averaged just 2.2 yards per carry, which is completely unacceptable. It is hard to win when your offense is so predictable. Opposing teams don’t have to respect the play action and can tee off on the passing plays. Minnesota’s unbalanced offense is starting to catch up with them as the season progresses.

The offensive line struggles to get a push, Long injured
The offensive line cannot get low and gain leverage. The Washington defensive line dominated the line of scrimmage and interior pressure was in the backfield before the ball was even handed to the running back. The pass protection was better at times, but the coaches provided plenty of help with tight ends and running backs blocking. It is necessary to watch more tape, but it was clear to see the offensive line displayed poor technique and fundamentals in short yardage situations. It is hard for the running backs to create yardage when the defensive lineman are two yards in the backfield as they receive the handoff. On the final drive of the game, left tackle Jake Long was setting his anchor and dropped to the ground injured. After the game, Mike Zimmer said Long suffered a torn achilles and will be out for the season. This is another hit to the Vikings’ offensive line that has lacked any continuity. Long was starting to catch stride in his return, but now he will rehab another major injury in his career. I wouldn’t be surprised to see Alex Boone play left tackle next week. The coaches could put Jeremiah Sirles or Zac Kerin at guard in this scenario.

Diggs with a plethora of receptions
Wide receiver Stefon Diggs continues to be the one player who can be relied upon in the passing game. No matter the situation, Diggs will get open and make a play. He hauled in 13 passes for 164 yards and picked up some difficult catches to move the chains. Diggs runs fantastic routes to get open and exposes the soft spots in the defense. He hasn’t reached the end zone over the last two weeks, but he has been frequently incorporated into the passing game.

Adam Thielen had three catches for 21 yards and notched several important receptions in critical situations. He continues to play at a high level and provides a spark to a Minnesota offense that needs to step up.

Rudolph gets into the end zone
Kyle Rudolph reached the end zone for a 20-yard score which tied the game at 14 before halftime. He got open in the flat, turned up the field, and barreled into the end zone. Rudolph had five catches for 69 yards and a touchdown. He had two receptions where he picked up some yardage after the catch and moved the chains twice for the Vikings’ offense on third down. Recently, Rudolph has disappeared from the game plan, but he was more involved in this matchup. His size and skill-set need to be utilized more as the Vikings continue to search for an identity on offense.

Defensive line gets just one sack
Over the four-game losing streak, the Vikings defensive line has struggled to get after the quarterback. It was a similar problem in this game. According to Pro Football Focus, the Vikings had just one sack, two hits, and 11 hurries in this game. They brought some interior pressure, but couldn’t get home. Both of the Washington tackles were injured and the Vikings still couldn’t exploit the Redskins’ weaknesses up front. Everson Griffen nearly whiffed on a sack at the end of the game, but luckily, Danielle Hunter was there to finish off Kirk Cousins. Linval Joseph provided plenty of interior pressure and the Vikings were getting a good push, but they couldn’t get to the quarterback.

Barr is struggling, linebackers missing assignments
I can’t put my finger on what might be wrong with linebacker Anthony Barr this season. He hasn’t been playing very physical and has struggled to shed blocks in the running game. Barr’s tackling has been suspect and he was beaten in coverage on a 38-yard touchdown reception by Vernon Davis. Barr was a few steps behind Davis, who hauled in the pass and sprinted into the end zone for a touchdown. At first glance, Barr appears to be playing tentative and his tackling hasn’t been up to par. Aside from him, the other linebackers missed assignments too. They struggled to pound the gaps and make plays in the running game. Rob Kelley had so many yards after contact, en route to a 97-yard performance on 22 carries. The linebackers didn’t execute their assignments and then missed tackles. This needs to be cleaned up because the Vikings are allowing far too many big plays. Credit the Redskins offense for being very creative and efficient. They ran many misdirection, play-action, and boot-legs that kept the Minnesota defense off balance. The Vikings are allowing too many big plays and it has impacted their ability to be successful on defense.

The secondary struggles, tackling is poor
Kirk Cousins carved up the Minnesota secondary with short passes and efficient completions. He finished the day 22-for-33 for 262 yards and two touchdowns. He extended plays and found his receivers up the field. Cousins didn’t make mistakes and managed the game with ease. Xavier Rhodes didn’t have his best game and struggled before he left with a concussion. Harrison Smith missed a few tackles in the running game and Mackensie Alexander showed more growing pains as he worked in the slot at the end of the game. He isn’t sound fundamentally and relies on physicality too much. Cousins also targeted Trae Waynes on some quick patterns and Waynes couldn’t make the plays. He was playing off the line of scrimmage again and it led to him being unable to play as physical. The secondary allowed Cousins to effectively carve them up and the Redskins got into a rhythm on offense. Minnesota needs to start pressuring the quarterback again to open up more opportunities for the secondary to be successful.

Walsh misses an extra point
The Vikings had all the momentum heading into the second half. They scored a touchdown to take a 20-14 lead. An extra point was needed to give them a 7-point lead heading into the break. Blair Walsh lined up for the kick and missed it wide right. This felt like the turning point in the game. The Vikings lost some of the energy they had as they entered halftime. Again, it changed the entire tone of the game moving forward. Walsh needs to start making extra points. There were other problems in this game, but his kick was a moment that quietly shifted the momentum. Walsh has missed eight kicks this season and the Vikings need all the points they can get in these close games.