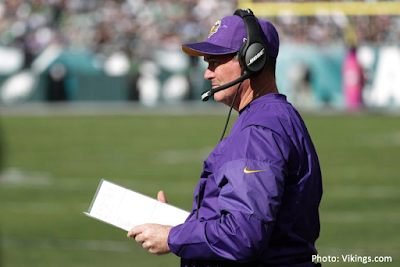 The Vikings are looking to get back on track after a disappointing loss in Philadelphia last week. Minnesota will see if they can spook away the ghost that cast a shadow over them last week, as they travel to Chicago for a primetime matchup with the Bears.


The Vikings are looking to get back on track after a disappointing loss in Philadelphia last week. They have the chance to redeem themselves in primetime against the 1-and-6, Chicago Bears. Hopefully, the Vikings can spook away the ghost that cast a shadow over them last week. Bears quarterback Jay Cutler is returning from a thumb injury and the Vikings need to do everything they can to get after him. Not to mention, their offense needs to get back on track and it starts by protecting Sam Bradford and running the football well. This is a game the Vikings should win, but they need to prove they have fixed the issues they had last week. Very rarely, does a Mike Zimmer squad put together two poor performances in a row. They had a week to identify their mistakes and you should expect to see a totally different Vikings team. Minnesota is 1-and-7 in their last eight games against Chicago at Solider Field and there is no such thing as an easy win the NFC North. They will need to earn it.

For more, take a dive inside my game preview:

Spook Jay Cutler
The Bears' offensive line has allowed the 12th-most quarterback hits (40) and their offensive line has been vulnerable. I watched tape back from Chicago's matchup with the Eagles earlier in the season. Philadelphia dominated the line of scrimmage and brought a variety of pressure/stunts to keep Jay Cutler from becoming comfortable in the pocket. Cutler has missed time with a thumb injury, but he will be making his return in this game. He will be shaking off some rust and the Vikings need to bring a ton of pressure to force him into mistakes. Cutler is at his best when he has time to distribute the ball. When he is pressured, he has the tendency to force throws and it leads to takeaways. Not to mention, getting him frustrated early generally causes him to struggle for the remainder of the game. The Vikings didn't bring much pressure against Philadelphia because they had a different game plan, but I would fully expect Mike Zimmer to send as many rush packages as he can against Cutler and a shaky offensive line unit. The secondary will be without Andrew Sendejo and rookie Jayron Kearse is expected to start. It will be important for him to stay disciplined and make tackles when they are available. The defense has been playing at a very high level and they should expose a Chicago offense that has struggled to find an identity this season.

Protect Sam Bradford
The Bears' defensive front is nowhere near the caliber of Philadelphia's, but it doesn't mean you shouldn't be concerned about the ability to protect quarterback Sam Bradford in this game. Edge rusher Pernell McPhee is back from injury and will cause some headaches for left tackle Jake Long if he isn't ready. He destroyed Matt Kalil last season in a game at Chicago and is a player you have to be prepared to defend. Chicago still has tallied a seventh-most 15 sacks and they have the 12th ranked unit in terms of total defense. Look for the Bears to bring plenty of pressure like the Eagles did last week. If they can't protect, the Vikings need to get rid of the ball quicker on offense or have extra blockers on the field to chip. Chicago will have a plan to bring pressure via stunts to get Sam Bradford frustrated and, more importantly, to make the offensive line confused. We don't know what the starting rotation will be on the offensive line, but no matter what, T.J. Clemmings and Jake Long have to play better if they are called upon. Sam Bradford had no time to make throws up the field last week and it has to change. The Bears have allowed a middle-of-the-road amount of passing yardage per game (243.3 yards) and the Vikings should be able to pass the ball on their young secondary.

Run the football without McKinnon
Jerick McKinnon is out for this game with an ankle injury, which means Matt Asiata and Ronnie Hillman will take over the duties at running back. The Vikings haven't run the ball well on the ground and are significantly below the league yards per carry average. Minnesota is averaging just 2.6 yards per carry on the ground, which is definitely not good enough to win against quality opponents. Heck, continued struggles on the ground could plague them against poor teams too. The offensive line needs to get better leverage in the running game and it starts with the interior. The guards are allowing too much interior pressure, which blows up runs before they even get started. Chicago has allowed 107 yards per game to start the season and Minnesota needs to run the ball well in this one. There is supposed to be wind blowing between 15-20 mph, which means running the ball might become important in this game.

Additionally, the running backs need to do better in pass protection too. Both Matt Asiata and Ronnie Hillman had a terrible day in pass protection and allowed several quarterback hits and pressures last week. Mike Zimmer discussed the problem, and hopefully, it will be improved before this game.

Get the ball out quick, Norv
It was pretty perplexing to see the Vikings run so many deep drops on offense last week. They had so much success when they got into a rhythm in the short passing game. Offensive coordinator Norv Turner needs to run more quick passes and get into a rhythm. The Vikings tried to protect 7-step drops with an offensive line that couldn't get it done. More innovative play design to get wide receivers open on short crossing routes or quick developing slants is a necessity. The Vikings can pass on this secondary, but they shouldn't try deep drops again because the Bears have a good enough pass rush to get after Bradford. Things could get challenging if the offense can't move the ball again. However, there is no reason to believe Mike Zimmer and the coaching staff didn't resolve these issues this week.