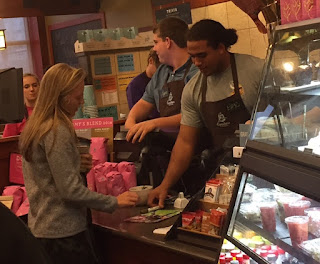 Vikings linebacker Eric Kendricks traded in his cleats for a Caribou Coffee apron to benefit the Amy's Blend campaign in the local Twin Cities community.

Linebacker Eric Kendricks mingled with fans, signed autographs, and served drinks to patrons for an hour on Tuesday afternoon at the Stadium Village location. Kendricks made a few drinks and the location donated 70.75 pounds to the Amy’s Blend campaign. The players were having a friendly competition to see who could sell the most coffee at their locations. Kendricks came out on top and raised the most proceeds for the charitable cause.

He speculated his fellow teammate and linebacker Chad Greenway was going to be his biggest competition.

“I would say Chad. Chad is the most competitive person I know – period,” he smiled.

The money raised from the day will be donated to the Amy’s Blend campaign and will impact those fighting cancer in the local community. Amy’s Blend is a coffee roast in memory of Amy Erickson, one of Caribou Coffee’s first roastmasters. Amy was loved by her co-workers for her contagious enthusiasm. Erickson lost her battle with breast cancer in 1995. To honor Amy, Caribou Coffee created a special coffee blend to raise money for CANCERCARE®.

Caribou Coffee in turn partners with CANCERCARE®, a non-profit organization helping those who are experiencing forms of cancer in the Twin Cities community. They provide resources for families who are impacted by various forms of cancer. Eric Kendricks’ presence helped the coffeehouse continue their legacy of helping others.

“The coolest thing about it is that this is a one team mentality. We all fight breast cancer together,” he said. “We are partnering with local communities like the Hope Lodge and the American Cancer Society and we are giving them beans to offset the money.”

As society gets caught up in their bustling lives, Meade finds this event as a refreshing way to see people coming together for a cause.

“In a day and age where you always hear about the negatives, having everybody come together and rally around one cause, it just shows you that there is passion and fun here,” Meade explained

Eric Kendricks finds community service as a way to give back to the fans who support him every week.

“It’s only right,” Kendricks said. “There’s many times in my life where I needed help and for me to help others is awesome.”

Hundreds of fans came to support the cause, while meeting one of their favorite Vikings players. Four pairs of game tickets were drawn by Kendricks for a few lucky coffee drinkers in attendance. The overwhelming support from the fans doesn’t surprise Kendricks, who is entering his second season in purple.

“Vikings fans, to see them come out for this, it’s normal for me,” he replied. “Ever since I’ve gotten here, Vikings fans have been awesome and they’ve been in full force. I couldn’t ask for a better fan base.”

Kendricks might have spent some time trying a different profession, but even after football, he doesn’t see “barista” as his future career title. To him, raising money for a great cause is the most important part of this event.

“I think I have it,” Kendricks laughed. “I love working here, but I don’t think it’s my future calling,” he laughed.