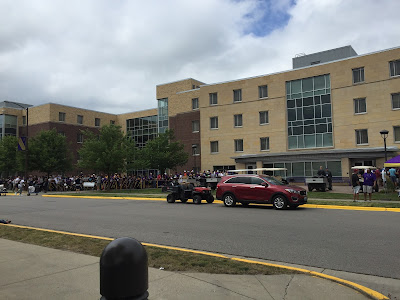 
The Vikings invaded Mankato, MN to begin their 51st season of training camp on the campus of Minnesota State University, Mankato. Fans filled the entry-way of the Julia Sears Residence Hall while players signed autographs and posed for pictures. The trip to training camp marks the beginning of a new season and journey for the Minnesota Vikings. After an impressive 2015 campaign, the expectations will be high for a young Vikings squad as they prepare for a new year.

Take a look inside my notebook from today's move-in day festivities:

Mike Zimmer rewarded with a contract extension
The Vikings kicked off training camp by announcing a new contract extension for head coach Mike Zimmer. Terms of the deal were not disclosed, but GM Rick Spielman indicated he will be around for many years to come.

"There is no doubt that Coach Zimmer is going to be our football coach for a long time,” Spielman smiled.

After two seasons at the helm, Zimmer's brand of tough, smart, and passionate football players has led to drastic improvement and success for the organization.

GM Rick Spielman said, “Our ownership deserves a championship, our fans deserve a championship, and there’s no doubt in our organization’s mind that Coach Zimmer is the right leader for this football team heading into the future."

Vikings Owner/Chairman Zygi Wilf echoed similar feelings about Coach Zimmer. “Mike has instilled a very positive atmosphere over the past three years, and our players have thrived under his tutelage and leadership. His focus on helping our players develop and maximize potential, individually and collectively, is critical for our current and future success," Wilf said. "We believe the continuity established with Mike leading our football team is a very positive step for our organization.”

In a press conference to open up training camp, Vikings Head Coach Mike Zimmer expressed his gratitude for the opportunity to coach an organization like the Minnesota Vikings.

Zimmer said, “I feel very, very fortunate to be the coach of the Vikings. It’s a great organization with a lot of great people. There’s no reason we could have the success that we’ve had to this point without the help of the people in the front office and in the business. It’s good to get that done and get a chance to move forward."

The Vikings locked Coach Zimmer down to an extension before training camp and the organization will now shift their attention towards constructing a championship product on the field. 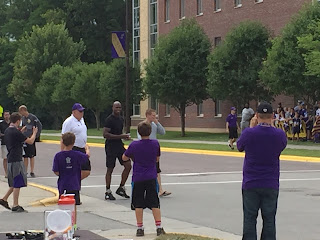 Hundreds of fans flooded the entry-way outside the Julia Sears residence hall on the campus of Minnesota-State, Mankato. Fans chanted "Teddy" as quarterback Teddy Bridgewater arrived with wide receiver Stefon Diggs. Bridgewater signed autographs and posed for pictures with the fans in attendance. Adrian Peterson arrived to camp with "MVP" chants filling the air. Peterson also signed autographs for a flurry of fans in attendance. The fans were excited, but the players were very focused and you could see the drive in their eyes as they were set to embark on the 2016 season. It is clear they have a mission on their minds and the coaching staff has them dialed in as they attempt to avenge their heartbreaking playoff loss.

Heinicke comes to camp in a boot, Nick Foles rumors swirl
Quarterback Taylor Heinicke arrived for training camp in a boot and his leg was propped up by a scooter. According to Chris Tomasson of the St. Paul Pioneer Press, Heinicke suffered a freak ankle injury while trying to break into his own home. The young quarterback was apparently locked out of his house after a late-night movie.

Jason Cole of Bleacher Report was reporting this morning that the Vikings had expressed interest in recently released St. Louis Rams quarterback Nick Foles. Foles, a four-year veteran in the NFL played under Vikings current tight end coach Pat Shurmur in Philadelphia. With Shurmur as his offensive coordinator in 2013, Foles threw for 27 touchdowns and two interceptions. He would instantly provide depth for the Vikings as a backup quarterback and could challenge veteran Shaun Hill for a roster spot. The Vikings have one roster spot available with Taylor Heinicke counting against the 90-man limit. The players were going through a conditioning test this afternoon. Roster moves, PUP list decisions, and other transactions will be announced upon completion of the workout, according to head coach Mike Zimmer.

Peterson has high expectations, has eyes on a championship
Vikings running back Adrian Peterson began camp discussing his work this offseason and the goals for the team in 2016. When asked about how many yards he envisions himself running for this season, Peterson said none of it matters if the Vikings are playing for a Lombardi Trophy.

Last season, Peterson struggled with ball security and catching balls out of the backfield. He indicated that he focused on improving both of those aspects of his game. Peterson explained that he worked closely on the mental side of the game this offseason.

"I think it was more like mentally. Just focusing on being more involved in the pass game, ball security, awareness, are probably the main two things," Peterson said.

However, no matter how many statistics or accolades Adrian Peterson accumulates, he will be pushing all of his teammates to be their best in training camp.

Peterson reiterated, "The expectation is at the highest level."

In a statement released by the team, GM Rick Spielman sent his appreciation to Williams for the contributions he made in purple.

“Kevin was one of the most respected players in Vikings history by his teammates and by opponents,” Spielman said. “He set a high standard for himself and led by example instead of words. We thank him for everything he gave the Vikings and the legacy he leaves.”

Kevin Williams is also thankful for the time he had with the Vikings organization and fondly remembers his days in Minnesota.

“I had a great time with the Vikings and appreciate them giving me a chance,” Williams said. “They drafted a small town kid from Arkansas and the organization, the city, the whole state really, helped raise me into a man. I appreciate them for that and look forward to coming back and doing some things with the team."

What's Next?
The Vikings will kick off their training camp practices with a 10:30-11:30 a.m. walkthrough and an afternoon practice (shells) from 2:45-5:10 p.m. For a complete training camp schedule, visit this link.