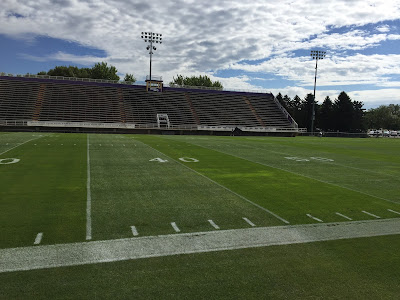 The Vikings opened training camp in Mankato, MN and the tempo was high as they kicked off the 2016 season. Daniel House takes you inside the practice with his first training camp notebook.


The Vikings opened training camp in Mankato, MN and the tempo was high as they kicked off the 2016 season. Aside from individual drills, the players spent plenty of time in 11-on-11 team drills and the quarterbacks worked on developing chemistry with the wide receivers. It is hard to evaluate the players in the trenches yet, but the skill players and their technique are worth taking into consideration. The offense is ahead of the defense, but that is expected with the limited amount of contact taking place early in training camp. Several players stood out from today's session and I have them profiled in this notebook.

Take a look inside my day one training camp notebook:

Laquon Treadwell flashes his skills
Vikings rookie wide receiver Laquon Treadwell flashed his skill-set today in several drills. First off, in a 1-on-1 drill with the defensive backs, Treadwell ran a fade up the sideline and made a difficult over the shoulder catch on cornerback Jabari Price. The pass was thrown by Teddy Bridgewater where only Treadwell could extend and make the play. In another drill, the wide receivers were simulating contested catches. Another receiver wrapped around them as they ran a comeback route towards the quarterback. Treadwell shielded himself from the defender and made the contested catch. The most impressive aspect of Treadwell's game is his fluidity off the line of scrimmage. He cuts off his routes with precision and uses a physical skill-set to his advantage. It is easy to see Treadwell being a very intriguing red zone target in the Vikings' offense.

Charles Johnson and Thielen shine
Wide Receiver Charles Johnson looked healthy again after battling a rib injury for most of 2015. He put a double move on cornerback Xavier Rhodes and hauled in a deep fade from Teddy Bridgewater. Johnson also made a contested catch on Xavier Rhodes and battled for the ball to come up with the catch. It is hard to evaluate Johnson until the cornerbacks press at the line of scrimmage, but he seemed rather comfortable.

Additionally, Adam Thielen really showed the improvement of his skill-set. Every year his route running and footwork seem to get a little better. Thielen ran a beautiful post route and Bridgewater perfectly placed the pass across the middle. He also made a nice adjustment across the middle on a poorly thrown Shaun Hill pass.

Moritz Böhringer Update
German sensation Moritz Böhringer made his Vikings training camp practice debut today. His route running was better than anticipated. Böhringer broke off a post route and beat safety Jayron Kearse in a 1-on-1 drill. Cornerback Trae Waynes overplayed Böhringer deep, Moritz read the decision and came back on the ball to haul in the pass. He did drop two passes in individual drills, but it happened when he seemed to be over concentrating on his footwork/technique.

Additionally, Böhringer and Laquon Treadwell were at practice about 20 minutes early and were working with wide receiver coach George Stewart on the field. It appears both of them have a strong ethic and are willing to put in the extra time.

Quarterbacks easing into the season
Teddy Bridgewater connected on deep passes to Laquon Treadwell and Charles Johnson during team drills. Early in the session, he overshot an open Jarius Wright on a double move up the sidelines. Later, Bridgewater did manage to connect with a wide-open Wright in the middle of the field, but the pass hung in the air too long. Bridgewater had about three overthrows on a variety of passes today. However, much of them were because he needs more time to get familiar with his wide receivers. This is a pretty common occurrence early in camp. Bridgewater did perfectly place a throw up the seam to Kyle Rudolph and was continually successful on those types of throws. Bridgewater looked in command of the offense and was establishing a better connection with his wide receivers towards the end of practice. His mechanics also seem to be much improved on a vast majority of his throws.

On the other hand, Shaun Hill really struggled. Many of his balls sailed high over wide receivers heads. Laquon Treadwell beat Jabari Price on an out route and Hill threw the pass too far inside. In addition, he overshot David Morgan on a flag route during individual drills. There were multiple occasions he didn't lead his receiver and left balls hanging.

Finally, Joel Stave had his fair share of issues early in practice, but started to improve as the day went on. Early in practice, his balls were floating high and receivers were waiting for his passes. Moritz Böhringer was open on an out route and the ball sailed over the top of his head. Stave did show some velocity and touch on his deep balls, but he was very inconsistent. This was a problem he had frequently when playing at Wisconsin. Stave threaded the needle on a comeback to Terrell Sinkfield and showed off his velocity as he fit it into a tight space. The young rookie quarterback will need time to develop, but it will be worth monitoring his progress as camp continues.

Jerick McKinnon is fast as lightning
Running back Jerick McKinnon has always been an incredibly athletic player, but this year he has another gear. His shifty running style was on full display today. He was so smooth and swift as he broke out of his cuts. McKinnon also seemed very comfortable under center and out of the shotgun. His knowledge of the system and familiarity with the scheme is rather evident. He was slithering between defenders and made several impressive down-hill runs into the second level. With Adrian Peterson limited, McKinnon saw plenty of reps with the first team.

Cordarrelle Patterson injured, Peterson limited
Cordarrelle Patterson hardly ran ten routes in his first practice of training camp before he left the afternoon session injured. Patterson made an impressive diving catch on a fade up the sidelines over Jabari Price. He appeared to land on his shoulder on the way down to the ground. Patterson left the field with a trainer and never returned to practice. In an interview with KFAN FM 100.3 after practice, head coach Mike Zimmer didn't express concern about Patterson's injury. He said, “I don’t think it’s anything concerning, but they’re taking a look at it.” The Vikings will likely provide an update on Patterson tomorrow after the morning walkthrough.

Running back Adrian Peterson was limited during some individual drills and Coach Zimmer indicated he tweaked himself during the offseason. In the same interview with KFAN FM 100.3, he said he wasn't concerned and explained they were just being careful with him. Peterson did sprints on the side field with trainer Eric Sugarman during individual drills and did return for other portions of practice.

Offensive Line Room will have shuffling
The Vikings starting first-team offensive line of Matt Kalil, Alex Boone, John Sullivan, Brandon Fusco, and Andre Smith was not surprising. With Phil Loadholt retiring, it was no doubt Smith would   see those snaps. Many questioned whether Mike Harris' performance last season would lead him to earning a chance to start at right guard. An undisclosed illness led Harris to be placed on the NFI list. Reports indicate he could be out for some time as he recovers. The depth among their offensive line took a significant hit with two players already lost. T.J. Clemmings was seeing snaps at left tackle in training camp, but was back on the right side for the morning walkthrough and afternoon session. Tackle Jeremiah Sirles was playing on the left side with rookie Willie Beavers at left guard. Additionally, Zac Kerin was taking snaps at right guard. Mike Zimmer indicated there would be plenty of shuffling but they would like to get a starting lineup set as soon as possible. In the afternoon session, offensive line coach Tony Sparano was really working with the players on their hand placement and punch out of the stance. It was worth noting the amount of instructional technique taking place within the offensive line group.

Rhodes has a rough day
Cornerback Xavier Rhodes didn't have his best day as he opened training camp. He was beaten by Charles Johnson on a deep fade, Laquon Treadwell defeated him on a comeback route, and he later mugged (would have been pass interference) Treadwell on an out route. The defensive backs aren't playing press coverage yet and it can be tough to cover wide receivers when they are 7-10 yards off the line of scrimmage. Nonetheless, Rhodes struggled and was beaten frequently in man coverage situations today.

Greenway at linebacker and Sendejo at safety
In the base 4-3 package, Chad Greenway was taking snaps at weakside linebacker. In later portions of practice, free agent signee Emmanuel Lamur was blending into the rotation for Greenway. Andrew Sendejo also saw starting snaps at safety and was an integral first team special teams contributor on the punt return and coverage units. Michael Griffin was with the second-team and Anthony Harris rotated with Antone Exum at the other safety spot. In fact, Exum corralled an interception in team drills on a pass that bobbled out of Jarius Wright's hands and into his arms. Additionally, Edmond Robinson rotated into the first-team defense when Anthony Barr was resting. Robinson nearly hauled in a leaping interception on a swing pattern out of the backfield. The length and fluidity of Robinson's game is something that could be a nice fit in Mike Zimmer's defensive scheme. Finally, cornerback Trae Waynes is still seeing action with the second team defense. He didn't blend in with the first team and veteran Terence Newman saw all the first team looks.

Vikings make some roster moves
The Vikings placed quarterback Taylor Heinicke (ankle/leg) and guard Mike Harris (illness) on the non-football injury list. Also, the team added tight end Rhett Ellison and defensive tackle Kenrick Ellis to the physically unable to perform list. Heinicke is expected to miss a significant amount of time, but timetables were not provided for any of the other players.

Outside gunners were working separately while the interior punt coverage unit worked. This list included: Charles Johnson, Laquon Treadwell, Jabari Price, Tre Roberson, Moritz Böhringer, Terence Newman, Keith Baxter, Melvin White, and Marcus Sherels- The Vikings were really experimenting with a number of potential options at outside gunner and held several separate drills to test these players. They didn't put together the complete unit and it will be interesting to see how they structure the interior and outside gunner portions of the punt coverage unit.