The Vikings blogging community has partnered with the Mike Zimmer Foundation for the 2016 #MoreThanWords campaign. Learn more about the history of this charity and how you can make a difference!


Six years ago, the life of Mike Zimmer and his family changed in an instant. The unexpected loss of their wife and mother, Vikki Zimmer, turned their lives upside down. Mike Zimmer, an assistant coach in Cincinnati at the time, quickly realized there was more to life than football. The tough football coach who was known for his rugged coaching style quickly had to find strength for his family.  Zimmer and his three kids -- Adam, Corri, and Marki -- coped with the loss of Vikki by leaning on each other for comfort. They also used football for strength during this life-changing event. Vikki's giving spirit and big heart were irreplaceable attributes for the Zimmer family. Everyone she came in contact with was touched by her sweet personality.

“She was the sweetest, kindest, most caring person who’d never say a bad word about anybody," Zimmer recalled on the Mike Zimmer Foundation website.

Whether it was buying groceries for a homeless woman or making cookies or brownies for others, Vikki's giving personality left a lasting impression on others. Mike Zimmer and his kids aimed to see her character and spirit continue touching the lives of others. When Mike Zimmer landed the head coaching job with the Minnesota Vikings in January of 2014, he knew his wife would be proud to see him reach the job he worked so hard to obtain.

After leading the Vikings to a 7-9 record in 2014 and drastically improving the team in every phase of the game, Zimmer continued to build his team with tough, smart, and aggressive players. His 2015 season provided more improvement including an 11-5 record, an NFC North Championship, and the Vikings first playoff appearance since 2012. After two years of building the team on-the-field, Zimmer decided it was time to make a difference off of it by launching a charity. His goal was to continue the legacy of his late wife, Vikki. In March, the Zimmer family officially launched the Mike Zimmer Foundation.

The goal of the Mike Zimmer Foundation is to better the lives of children in need. They hope to accomplish this statement by promoting a healthy, active lifestyle and way of living for children. Additionally, they want to motivate less fortunate children and help them chase their dreams.

The plans are already in motion to impact the local Twin Cities community through the Mike Zimmer Foundation.

The foundation will host X's O's and A+'s football camps for two age groups that will incorporate the basic fundamentals of football with sportsmanship, fiscal responsibility, and academic studies. The camps will include ACT/SAT prep sessions and lessons on the importance of budgeting and savings.

Coach Zimmer also launched a scholarship program that allows high school students to continue their education. The MVP Scholarships not only provide financial assistance for the students, but prepare them for their future endeavors by helping them land an internship in their field of choice. Coach Zimmer will be awarding two scholarships to one outstanding male and female athlete from the state of Minnesota. Each scholarship is worth $25,000 towards a four-year university, along with a guaranteed internship in their chosen field.

Coach Zimmer is also implementing a Stand Out Students honor roll, which recognizes strong academic performance in school districts across the state of Minnesota. Students who reach the “A” Honor Roll at least two times during the school year, and pass state standardized testing will be invited to attend the All-Pro Academic Celebration where they will get to meet Coach Zimmer and Vikings players. Coach Zimmer hopes to instill the importance of education to students in K-5 throughout school districts in Minnesota.

Additionally, Coach Zimmer will host the Mike Zimmer Classic Golf Tournament, which will benefit his foundation. Zimmer has several other events scheduled to benefit his charity including a football season kick-off event for fans. More details about these events will be released on the foundation website at a later date. 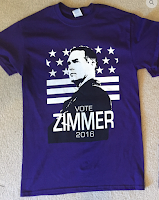 Finally, Zimmer is also selling limited edition t-shirts to benefit the Mike Zimmer Foundation. The designs incorporate some of Coach Zimmer's most infamous quotes, including "Good is the Enemy of Great" and "Don't Tell Me About The Labor, Just Show Me the Baby." Another popular design is the #Zimmer2016 t-shirt, which indicates Zimmer should be making a run for president in November of 2016.

As the local Minnesota Vikings blogging community has done in the past, we will again be launching the #MoreThanWords campaign to help raise money for the Mike Zimmer Foundation. This season we will be using a PayPal system to allow for an easier donation tracking process (A Paypal account is not required to donate and all major credit cards are accepted). We have done away with the competition between the websites in the Vikings community, but will collaboratively fundraise. Our goal is to not only raise money, but to promote the positive contributions the Mike Zimmer Foundation is making on society. We hope you will consider donating to help us reach our fundraising goal of $10,000. Those who donate will be entered into a drawing for several prizes that the Mike Zimmer Foundation has provided. Each person will receive one entry for every $10 they donate.

The giveaways include the following:

- Autographed Adrian Peterson Jersey
- Two club level tickets to the November 20th game against Arizona at U.S. Bank Stadium
- A chance to meet Mike Zimmer in person and receive a game ball signed by Coach himself
- All four of the Foundation's T-Shirt designs ($25 value each)
- A game ball signed by Anthony Barr

The campaign will run from June 1st to July 15th and we will select winners upon the completion of fundraising.

Mike Zimmer's goal to promote the spirit of Vikki Zimmer, while implementing the values of education, sportsmanship, scholarship, and football are poised to make an impact on the local Twin Cities community for generations to come.

Vikki Zimmer has to be so proud of the contributions Mike, Adam, Corri, and Marki are making on society off the football field. They are continuing the sweet, kind, and big-hearted values she instilled in each of them.

She now knows her legacy, mission, and values will live forever with the help of the Mike Zimmer Foundation.

To donate to the Mike Zimmer campaign during the #MoreThanWords campaign: click here.