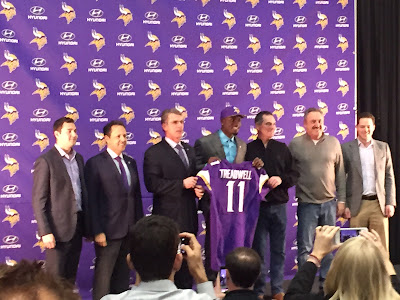 Vikings first round draft pick Laquon Treadwell arrived in Minnesota for his first appearance with the Twin Cities media. Read his thoughts about joining the Minnesota Vikings.

Treadwell, a 6'2" wide receiver, adds a game-changing playmaker to the Vikings' receiving corps. He is a player that can high-point the football and make tough contested catches. This type of skill-set is exactly what the Vikings coaching staff was searching for from a wide receiver.

During his first appearance with the Twin Cities media, Treadwell stressed how excited he was to join the organization. His soft-spoken demeanor and calm presence at the podium resonated with the media in attendance for his introductory press conference.

After a night of fanfare in his home state of Illinois, Treadwell made the trip to Minnesota to be introduced as a member of the Vikings on Friday afternoon.

General Manager Rick Spielman continued to share the excitement this organization has for adding Treadwell in the first round.

"He is the type of Minnesota football player we are trying to bring in here," Spielman said.

Head Coach Mike Zimmer is also thrilled to have Treadwell in the facility to work with the coaching staff.

"Myself, the rest of the coaches, I know Coach Stewart, Coach Turner are really excited to get Laquon here," Zimmer explained.

In his short time at Winter Park, Laquon Treadwell had the opportunity to meet his new quarterback, Teddy Bridgewater. He is really looking forward to the time he'll spend with the third-year quarterback.

"I got the chance to meet Teddy Bridgewater and he's a great guy. I can see us getting along well," Treadwell smiled.

When asked what kind of conversation he had with Bridgewater, he said the message was clear -- the young quarterback has his eyes set on the Super Bowl.

"Last thing I asked Teddy Bridgewater was: 'what's his goal for the team?', and he told me Super Bowl," Treadwell said.

As Treadwell prepared for the NFL Draft process, he spent several weeks training with Vikings' Hall of Fame wide receiver, Cris Carter. They worked on several aspects of his game, but he said the biggest piece of advice from Carter was, "never be late."

Treadwell was asked which route he felt was the best in his arsenal of moves. He didn't have an answer. Instead, he said all of his routes can be improved. That's where the hard work and competitive edge of Treadwell's playing style comes into play.

"I feel like I can work on all the routes, honestly," Treadwell explained.

In both press conferences with Mike Zimmer and Rick Spielman on Thursday evening, they both stressed the amount of competitive edge in Treadwell's playing style. When asked where that came from, Treadwell said it was natural for him in high school.

Growing up, Treadwell had the opportunity to watch many great receivers. However, he never molded his style to any wide receiver in particular.

"Never molded my game after anyone, wouldn't say I picked one....Would say I watched all the great receivers," Treadwell explained.

Aside from football, Treadwell spent a portion of his press conference discussing his family. His three-year-old daughter, Madison, joined him on stage for his jersey presentation last night. Treadwell said that moment was very special for his family.

Raising his daughter has kept him humble and thankful throughout his life. Throughout his press conference, it was easy to see Treadwell's very grounded personality.

"Every day you just have to be thankful for your kids. She's my biggest blessing," Treadwell stated.

As for what areas of his game will be the biggest adjustment for him at the next level, Treadwell noted several specifics.

"Learning the playbook and adjusting to new route combinations and getting comfortable with NFL," Treadwell explained.

Despite the whirlwind of emotions over the last 24 hours, Laquon Treadwell feels Minnesota is the right place for him to begin his NFL career.

"The dynamic of the team, how things played out in the draft, I think I landed in the right place for me...Honored, blessed, and grateful. Glad to be here and looking forward to starting my NFL career," Treadwell said.

The sights are set high for the first-year wide receiver who will immediately become of of the main weapons in the Vikings' passing game. His humble personality and work ethic seem to be a perfect fit for the brand of football GM Rick Spielman and Head Coach Mike Zimmer are building in Minnesota.