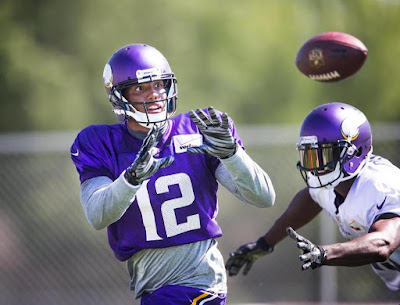 The Vikings had one afternoon practice today and took total advantage of the opportunity. Daniel House takes you inside his notebook from day seven of Vikings training camp.


The Vikings had one afternoon practice today and took total advantage of the opportunity. Today's session included some of the most team work we have seen in training camp thus far. It was an extremely high spirited practice and the players completed it 30 minutes early because of it.

Bridgewater having no problems, Hill getting some rest

Teddy Bridgewater continues to throw perfect passes into tight gaps of the defense. His most impressive throw came on a fade to Mike Wallace. Xavier Rhodes had perfect coverage on him, but Bridgewater threw the pass in the tight gap over Wallace's shoulder. He also threw a similar pass to Jarius Wright on a corner route. Terence Newman had perfect position on Wright in the slot, but Bridgewater threw a fastball into the tight window. Teddy continues to look impressive on the throws that are contested by defensive backs. Shaun Hill got some rest today and Taylor Heinicke took the bulk of the second-team reps. Mike Zimmer joked after practice that "they ran out of oil in the training room." Hill was coming off a night practice where he looked impressive in team drills. Taylor Heinicke had his best practice of training camp and only threw two high passes, which is significantly better than any of the other throwing sessions he has had. The quarterbacks are becoming more comfortable with their wide receivers and the offensive terminology.

McKinnon is getting the edge as the third down running back

Jerick McKinnon is seeing the vast majority of snaps as the third-down running back. The running backs didn't do any drills in pass protection, but this is definitely the biggest weakness he possesses. McKinnon took several hand-offs today and used his low center of gravity and cutback skills to run the ball well. He caught several passes out of the backfield and continued to show his versatility as a running back. Matt Asiata hasn't seen the amount of snaps he did last year at training camp. Today, he was primarily used on the goal-line and in short yardage situations. This is how Asiata is expected to be used this season.

Diggs adding to his resume, Patterson making some tough grabs

Stefon Diggs hauled in an excellent corner route from Taylor Heinicke. He made the adjustment in the end zone and hauled in the contested reception over Jabari Price. Diggs also high-pointed a pass across the middle in the 9-on-7 drill. He is finding ways to make plays and hasn't had any disappointing moments at training camp thus far. In the team drills, Cordarrelle Patterson hauled in one of the best catches he has made in practice. Taylor Heinicke threw a fade to the sideline and Marcus Sherels was draped all over Patterson. He managed to win a jump ball battle against Sherels on the sideline. Patterson also ran an out route and made another tough grab on Sherels in traffic. The biggest difference this year for Patterson is how he is winning contested battles, while running much-impoved routes. Adam Thielen made an excellent high-point catch on a crossing route, beating cornerback DeMarcus Van Dyke. Thielen continues to run routes well and is playing a major role on special teams.

MyCole Pruitt corralled a leaping reception in the back of the end zone for a touchdown during red zone work. He caught the pass at its highest point and beat Antone Exum Jr. in the secondary. Pruitt continues to find ways to get open and has really been shining when the team has worked inside the 20-yard line. In 9-on-7 drills, Kyle Rudolph hauled in an impressive one-handed grab with Eric Kendricks all over him. Rudolph hasn't really stood out in the first week of training camp, but he has easily ran some of the best routes among the tight ends. Today, Brandon Bostick really struggled during the individual work with the quarterbacks. He was really slow out of his break and dropped two passes in the drill.

Kalil struggling with the inside rush, Clemmings is improving

Everyone wants to know how Matt Kalil is progressing every day in practice. As of late, things haven't been going very well. The primary issue has come on the inside pass rush. Kalil has handled the outside pass rush better, but he can't win with any interior pressure. For example, Everson Griffen and Danielle Hunter both beat him in 1-on-1 drills today. Both of those rushes came from the interior. Hunter came back in the final 1-on-1 session and was unable to beat Kalil on the outside. Matt Kalil can only be truly evaluated in real game action. The hope of many is that Brandon Fusco can help alleviate some of the interior pressure for Kalil. It's not time to panic until Kalil struggles in live action on Sundays. T.J. Clemmings easily had his best practice of training camp. He won all but one of his 1-on-1 matchups. His footwork is improving and he is starting to understand the way he needs to perform at this level. The offensive lineman are consistently working on technique during the practice sessions. Clemmings is very athletic and Coach Zimmer has made the comment that he is just adjusting to what they are trying to do with him.

Griffen and Joseph are dominating, Hunter continues to emerge

None of the offensive lineman can handle Everson Griffen on the field. He simply is so quick off the ball and strong out of his stance. He not only beat Matt Kalil, but handed it to Austin Shepherd and David Yankey today. He would have had at least two sacks in the team drills and continues to use an interior spin move to cause havoc. Linval Joseph put John Sullivan on his back and followed it up with a pancake of Zac Kerin. He is using light footwork and his strength to blow offensive lineman off the ball. Shariff Floyd won two of his three 1-on-1 battles and blew up a Matt Asiata run in team drills. Danielle Hunter beat David Yankey twice in 1-on-1 drills and followed it up by beating Matt Kalil on an inside rush. Hunter continues to prove he should see some snaps as a rotational pass rusher on third down.

Cole shines in run defense, Hodges mixing around at linebacker

Audie Cole might be the best run defending linebacker on this roster. He has always had at least one excellent play in run support at every practice. Today, he perfectly read a run play to Matt Asiata and exploded to fill the gap. During his career in Minnesota, he has continually shown excellent run recognition skills. He might be average in coverage, but he certainly can get it done as a run defender.  Gerald Hodges saw some reps at middle linebacker in the night practice, but worked exclusively on the outside today. I talked to Hodges after practice and he says he really likes the challenge of playing inside. In his post-practice presser, Mike Zimmer said he just got a few looks at middle linebacker to see a different perspective. Nonetheless, Hodges saw some snaps with Chad Greenway in the nickel package today. He has been all over the field in training camp and the coaches are definitely going to find ways to use his versatility on the field this season.

Rhodes has a fantastic day, Sherels has been battling

Xavier Rhodes nearly had two interceptions in today's practice. His best chance came on a pass he reached across Kyle Rudolph to knock away. On several occasions, Rhodes had excellent position on receivers. For example, he perfectly blanketed Mike Wallace on a wheel route and caused a throw-away. Rhodes followed it up with a pass defensed on a throw towards the sidelines intended for Charles Johnson. I've been mentioning Marcus Sherels' name on a frequent basis lately. He has been on the opposite end of some battles in training camp. He has contested every pass and has never been totally blown away by a wide receiver. Sherels hasn't won the tough battles with the wide receivers, but has been in position to do so.

After struggling in the night practice, Antone Exum Jr. didn't rebound in today's session. He was beaten by MyCole Pruitt for a touchdown in the goal-line session. Exum Jr. saw a few snaps with the first-team, but it was in a limited capacity. During that time, he lost a battle to Charles Johnson on a corner post route. However, he did manage to come up nicely in run support to stop a Jerick McKinnon hand-off. Exum Jr. has been inconsistent, but he will get a chance to showcase himself in the preseason at strong safety.

Today, a group of media members had the chance to listen and ask rule change questions to a group of NFL officials. We watched a video which began with coaches and players talking about rules that supported player safety. There will be an official in the press box (a certified athletic trainer) who will signal to officials on the field if a player shows symptoms of a head injury and has not been taken off the field by medical staff/game officials. The official can also remove the player from the game if he sees any unusual behavior from the athlete. In either situation, the team will not be charged with a timeout, and the player will be evaluated on the sideline by medical staff members.

There were several newly implemented rules that impact blocking. The first includes an extension of the rule on peel-back blocks (blocks aimed at an opposing player’s knees coming from behind as the blocker approaches his own end line) from inside the tackle box (this was already llegal), to the entire field. However, when moving towards the opposing end zone, the block is legal. The second blocking rule implemented was chop blocks not adjacent to a player on the backside of a play.

This year, the league clarified the verbiage regarding the possession rule. This was the play that occurred with Dez Bryant in the NFC Divisional playoff game against Green Bay last year. No rule has been changed, but they have made clear that:

Officials also indicated there will be a direct emphasis on fights among teams. The new rule indicates that any active participant in a fight will be penalized and referees can still eject players for flagrant contact. However, players who move into the area of a fight may be penalized. This includes anyone who might try to break up the scuffle.

The league also added a rule that will penalize a player for pulling an opponent off of a pile. On special teams, the league expanded a rule that applied to kick attempts to cover punts. Players are now unable to push teammates forward towards the line of scrummage. In addition, extra point attempts will take place from the 15-yard line this year.

Finally, wide receivers are also now protected as a defenseless receiver on interceptions that change possession.