Review of the Vikings and Bears Game 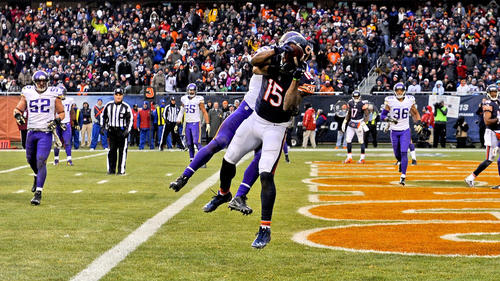 Daniel House analyzes where the Vikings went wrong during their 21-13 loss to the Chicago Bears last week.


Last week, the Vikings dropped a critical divisional contest to the Chicago Bears. The offense couldn't score points, the defense was exploited in the secondary, and the pass rush was rather non-existent. All of this happened following a bye week, against a struggling Bears squad. It was a very winnable game and several situations throughout this matchup left fans scratching their heads.

I took a look at what contributed to the Vikings 21-13 loss to the Chicago Bears:

The Vikings offensive line has been extremely disappointing and has allowed the third-most sacks in the league. Last week, they only surrendered two sacks, but the amount of QB hurries and pressures was totally unacceptable. Matt Kalil was beaten off the edge on a frequent basis by veteran Jared Allen. He was getting smoked off the ball and he wasn't even able to initiate contact on several of the pass rush opportunities. This group has been extremely inconsistent in pass protection and it has really hurt the progression of Teddy Bridgewater. When he is provided with time, Bridgewater is able to make the reads and step into a clean pocket. At this time, this is only happening about 10 times per game. It slows down the Vikings offense and is a contributing reason to why the offense cannot sustain drives. Bridgewater has so much pressure in his face, that he is summoned to dump passes to the running backs. Of course, some of this issue could be placed upon the wide receivers inability to get open down the field, but the offensive line is holding most of the weight. I don't think there is one group that has underperformed more than the Vikings offensive line and if this trend continues down the stretch, the last few games of the season are going to come with grave circumstances.

The special teams coverage and return teams have been underwhelming on a frequent basis this season. A lone bright spot in this game would be Andrew Sendejo's 48-yard run off of a fake punt early in the game. This helped provide some of the very limited offensive fire power the Vikings had. Aside from that, Jeff Locke continues to be a liability at punter and he cannot help win the field position battle. The short field is unacceptable and places a heavy strain on the defense. With all of this said, the return teams haven't been able to create big special teams plays and it seems as if they haven't went one game without a critical holding call. These types of lapses I discussed are all areas that don't allow the Vikings to win all three critical phases of the game. In this league, to beat certain teams, you have to be perfect in all aspects of the game and this season, the Vikings haven't been able to say this.

Not closing on the pass rush

The Vikings entered this game with 30 sacks and were ranked in the top-three of this category. They left Solider Field without a sack and this played a major role in the loss. Jay Cutler was able to extend plays outside of the pocket and he found receivers up the field. In addition, he was able to step up and beat the blitz by running for yardage up the middle. The defensive line was getting a great push, but they just couldn't finish and make the plays necessary to be successful as a unit. This team isn't built to have a heavy reliance placed on their secondary and when pressure cannot be applied, the yards will pile up in a hurry. Entering this game, it was proven Jay Cutler makes mistakes when he is pressured and the Vikings weren't able to capitalize on this. Next week, if the defense cannot apply pressure, Packers quarterback Aaron Rodgers will make his way out of the pocket, which is the sign of death for opposing defenses.

The Vikings as a total unit 13 missed tackles in this game and Mike Zimmer wasn't pleased about this statistic. In fact, this week he used one of the team's 14 seasonal padded practice days in an effort to fix this issue. Linebacker Anthony Barr had one of his most disappointing games and picked up five missed tackles. The Vikings defense allowed a massive amount of yards after contact and it resulted in the Bears being able to sustain drives and ultimately, turn them into touchdowns. This is one of the first weeks the Vikings haven't been fundamentally sound when tackling and you have to wonder if the bye week contributed to a regression in this area. Check-downs and short runs cannot turn into extended plays, and if this trend continues against the talented running backs the Vikings will face down the stretch, it could get ugly.

Josh Robinson was targeted 15 times by Jay Cutler, and allowed 11 passes for 139 yards and two touchdowns. It was clear that the Bears game plan was to exploit Robinson's size deficiency and his inability to close on plays. Robinson was performing well until this game, but he wasn't squared up with top-tier receivers. Quite frankly, teams haven't been looking to exploit him and now it will be interesting to see if this is a reoccurring theme going forward. Robinson is sometimes in position, but he can't make the plays over more physical wide receivers. Teams will likely avoid throwing towards Captain Munnerlyn and Xavier Rhodes, which means Josh Robinson will be one-on-one with some talented wide receivers. Look for more situations where he is granted help into the scheme, especially against receivers that have a distinct height advantage over him.