Five Things to Watch For Against Green Bay 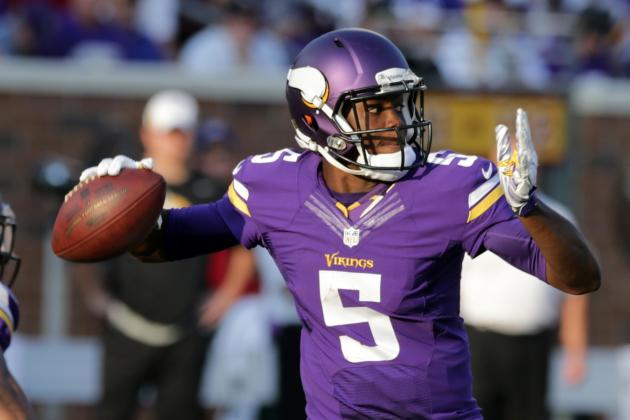 Daniel House previews the Vikings matchup with the Packers and discusses how they can upset one of the hottest teams in the league.

The Vikings dropped another NFC North contest to the Chicago Bears last week and will be looking to bounce back in a home matchup with Green Bay. It won't be easy to get back on track against a Packers team that has won their last two games by a combined 64 points. They are arguably the hottest team in the league and have won five of their last six contests. Nonetheless, Green Bay averages nearly 44 points per game at home this year, but have only scored around 23 points per game on the road. The Vikings offense will need to establish the running game, punch the ball into the end zone, and ultimately, keep the ball out of the hands of the Packers offense. All of this is easier said than done, but this Vikings squad certainly won't forget about the 42-10 beat down the Packers dropped on them back in Week 5. This will definitely be used as a motivational tool and it will be interesting to see how the team responds against a top-tier team after losing a winnable game last week. They will have their hands full and I have provided some critical areas that will need to be executed perfectly if the Vikings want to pull the upset.

The Vikings offensive line has been a major liability and they can't allow the Packers defense line to dictate this game. Green Bay has notched three or more sacks in three of their last four games and they have accumulated seven takeaways over the last two contests. In addition, they have added three defensive touchdowns and their pass rush has been dictating the tempo of the game. Matt Kalil has been a big pile of pig slop this season and he needs to hold down the fort if the Vikings want to complete throws down the field. Teddy Bridgewater needs to have a clean pocket to make the throws necessary to move the chains. If the Vikings can establish the pass and run, while keeping the pocket clean, they can win the time of possession battle. This keeps the ball out of the hands of a Packers offense that has outscored their last two opponents 72-6 in the first half. Aaron Rodgers is steaming hot and the Green Bay offense can't be on the field for an extended amount of time. More importantly, their defense can't create turnovers and provide their offense with a short field.

Running back Matt Asiata is out of this game with a concussion and Jerick McKinnon has witnessed a reduced workload with a sore back this week. That means recently claimed running back Ben Tate will see plenty of carries in tomorrow's game. He probably won't see a huge amount of snaps, but he definitely will get some carries throughout the contest. The Vikings need to establish the running game and move the chains by doing so. This keeps the ball out of the hands of the Packers offense and places Teddy Bridgewater in short third-down situations. By mixing the offense through the air and on the ground, Minnesota will be able to sustain drives, get in a flow, and not fall behind early.

Aaron Rodgers has thrown at least three touchdowns in six of his last seven games. Green Bay averages 20.8 points per game in the first half and Rodgers has played a role in this success. In the first half, he is averaging 272 yards passing and three touchdowns in his last three contests. With all of this being said, the Vikings need to pressure Aaron Rodgers early and often. They can't allow him to scamper outside the pocket and shift his eyes down the field. This is when he is most deadly and makes extended plays down the field. The defensive line couldn't accumulate a sack last week and they allowed Jay Cutler to extend plays. By blitzing and running stunts, they can pressure Rodgers and keep him from having adequate time to find his receivers up the field. The Vikings defense needs to send a statement early in this game and can't fall behind early, or they will have a tough time coming back.

Holding up in the secondary

The Packers have a flurry of wide receivers that are contributing to their offensive flow. Jordy Nelson continues to emerge as Aaron Rodgers top target and he is certainly one of the top-tier wide-outs in the league. He scored a 66-yard touchdown against the Vikings in Week 5 and he has 5 receptions of 40-plus yards this season. What's more, he has four touchdowns of 50-plus yards, which is tops in NFL. He will be spread throughout the field and the Vikings secondary will need to account for him. More importantly, they can't sleep on Randall Cobb. He has also been a reliable threat in the red zone and is one of their most dynamic weapons on offense. The Packers like to spread the ball around and it will be interesting to see if they exploit the weaknesses Josh Robinson displayed in coverage last week. If the pressure can be applied up front, the door will be opened for the secondary to make plays and ultimately, perform better. However, they need to be ready for an elite level quarterback like Aaron Rodgers.

Making the tackles in space

The Vikings missed 13 tackles last week and it was a big reason why they lost to Chicago. They can't allow the Packers to move the chains and pick up extra yardage. These types of plays allow their offense to stay on the field and sustain drives. Packers running back Eddie Lacy is great at breaking tackles and is extremely tough to bring down. If the Minnesota defense cannot tackle, he will gain extra yardage and the Green Bay offense will become a two-headed monster. Extra yardage and increased first downs lead to a maximized time of possession. This dooms the Vikings against any opponent and will only add to their list of issues against a team like Green Bay. Mike Zimmer worked hard this week on tackling fundamentals and knows that if the Vikings can't tackle, the Packers offense could drop a high volume of points all over TCF Bank Stadium.