Notebook: Vikings suffer a last-second loss to the Bills 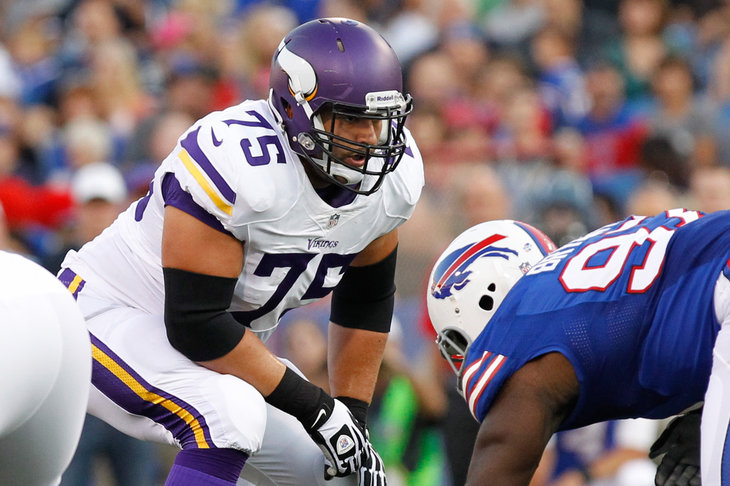 The Vikings couldn't finish the game late in the fourth quarter and a last-second touchdown resulted in a 17-16 loss to the Buffalo Bills.

The Minnesota Vikings were unable to close out the game and it resulted in a crushing 17-16 last-second loss to the Buffalo Bills. Offensively, the Vikings settled for field goals on a frequent basis and were unable to punch the ball into the end zone. At times the play calling was conservative and the Vikings settled for punts and field goals, when they could have been more aggressive. In reality NFL football comes down to two or three plays that can make the overall difference in the end result of the contest.

The defense played very well today and notched three forced fumbles, an interception, and six sacks. However, a huge 4th-and-20 conversion, following a sack was the turning point in the ballgame. Linebacker Chad Greenway was beaten during a miscommunication in coverage and it resulted in a monstrous conversion and set the tone for the Bills to finish a 15 play, 80-yard touchdown drive. Cornerback Xavier Rhodes was in position to make the plays at the end of the game, but was unable to close on the ball. Kyle Orton completed the 2-yard touchdown pass to rookie wide receiver Sammy Watkins, Dan Carpenter hit the extra point and that was everything necessary for the Buffalo Bills to win in a last-second fashion.

It's hard to fathom the Vikings lost today when their defense forced four turnovers, the offense rushed for 100 yards against the top run defense in the league, and they won the time of possession battle. Those are all areas that usually signal success and wins for football teams across the NFL. Two or three big plays can change the entire game and this was definitely the case in today's loss.

We are all witnessing flashes of brilliant play from quarterback Teddy Bridgewater, but the consistency hasn't been present recently. He converted on several huge third-down conversions late in the game and he was calm during those situations. Bridgewater seemed to relax towards the end of the 2nd quarter and was able to put together a touchdown drive that resulted in his first career NFL touchdown pass. There were portions of the game where Bridgewater unnecessarily took sacks and tried to fire passes into areas where he maybe shouldn't. He threw two interceptions today and finished with a total QB rating of 56.1. All of these lapses are to be expected with a rookie quarterback who hasn't witnessed an extended amount of action in the NFL. You can't believe every rookie quarterback will rush onto the scene and immediately be an all-pro. It is unfair to evaluate Teddy Bridgewater until he has more time to develop as a quarterback in this league.

Rookie running back Jerick McKinnon is settling into his role and accumulated 103 yards on the top rushing defense in the league. The Bills defense hadn't allowed a running play over 16 yards this season and were allowing just 67.5 rushing yards per game. McKinnon was shifting hard and his vision and cutback abilities were on display. It was encouraging to see him run well off the edge and in between the tackles against a very formidable Bills run defense. McKinnon was averaging nearly six yards per carry today and he has solidified himself as the replacement starting running back.

Jennings and Wright lead the receivers

Greg Jennings was more involved in the offense today and added two huge third-down conversions in this game. He seemed to be one of the only receivers (aside from Jarius Wright), who could get open in space today. Jennings has always been solid at gaining separation and Teddy Bridgewater found him for a total of seven receptions for 77 yards. Later in the game, Jarius Wright was more involved and added a critical tip-toe sideline catch that kept the Vikings drive alive. Again, the Vikings couldn't take advantage and were forced to settle for field goal attempts on a frequent basis today. Cordarrelle Patterson added a 4-yard touchdown reception, but hauled in just two catches for a total of 9 yards. Many believe his hip injury is still bothering him and that this could be a contributing role to his limited involvement in the Vikings scheme.

Offensive guard Vlad Ducasse and center John Sullivan were both injured on the same play in the 1st quarter. Sullivan left with a concussion, while Ducasse exited with a knee injury. Mike Harris and Joe Berger entered the game and it didn't appear they were among the major issues in the Vikings offensive line. Quarterback Teddy Bridgewater was sacked five times and just one of them was related to a slow release by the rookie. Matt Kalil, Phil Loadholt, and Charlie Johnson were at the  hands of four sacks that occurred today. There was one point where Johnson and Kalil were looking on as Bridgewater was delivered a spine tingling hit. The reserves actually performed surprisingly well and again, the same players have struggled among the Vikings offensive line. The issue hasn't been with running blocking and edge pass protection is the main area that needs improvement. This is the third consecutive week the offensive line hasn't met expectations levels and it becomes even harder to gain continuity when injuries riddle the position group.

Defensive Line gets it done

The Vikings defensive line played their best game of the 2014 season and notched six sacks. Everson Griffen added three sacks and Sharrif Floyd, Tom Johnson and Linval Joseph each added quarterback takedowns. The stunts being performed between Floyd and Griffen were causing havoc among the Buffalo Bills offensive line. Interior pressure and leverage was very impressive and Everson Griffen took advantage of this, adding three sacks off the edge. It was encouraging to see the defensive line cohesively cause pressure on a consistent basis. This was the first game I can say I was impressed by the effort among the Vikings defensive line. The pressure up front was admirable enough to help create turnovers and opportunities for the secondary to make plays.

Anthony Barr is playing like a man and it is extremely encouraging to see his improvement every week. Teams run screens at Barr and he shuts the door about as quick as it opened. More importantly, we are starting to see more situations where he is blitzing off the line of scrimmage. He was frequently disrupting in the pass rush and was a big threat coming off of the edge. In addition, he added two beautiful pass deflections that only athletic linebackers can make. He is far ahead of expectation levels and after adding two fumble recoveries today, many believe his making a case to be considered a candidate for defensive rookie of the year.

Chad Greenway was having a great game and added 15 tackles, but one play swiftly changed the perception of his performance. There was major disarray following a sack that pushed the Bills into a 4th-and-20 situation. The coaching staff was trying to communicate with Greenway on the field and the call was coming onto the field. Confusion was all over the play and as a result, Greenway was beaten up the seam in coverage and the Bills were able to convert on a critical third-and-long situation. This quickly became the turning point in the game and led to the Bills game-winning touchdown just three plays later. As I discussed earlier, the difference between a win and loss can be dictated by two or three plays.

Rhodes beaten in the end

The only plays anyone will remember are the ones where Xavier Rhodes was beaten near the end of the game. However, up until that point, Rhodes was playing well and was making the plays necessary to be successful. He closed beautifully on a screen pass to the outside and perfectly created the tackle for loss. Rhodes added a pass defensed, but he arguably made his biggest mistake near the end of the game. He was beaten twice on the final two plays of the game, but was in the position to make the plays. The receiver made a catch on the ball to maintain body control to the ground and Kyle Orton placed the pass in a spot where only the wide receiver could haul in the pass. This has been an area that has been problematic in the past for Rhodes, but he is consistently showing growth. Along with this progression, there is bound to be some pains and you can't expect immediate perfection from a second-year cornerback in this league.

Safety Robert Blanton added an interception and a fumble recovery in today's game. He has been the man people have turned to with skepticism in the backend of the defense. Blanton still took some poor angles in run support, but he was able to close on turnover opportunities when they were presented. He still isn't performing at a high level, but he was a noteworthy performer during certain stages of the game.

Kicker Blair Walsh knocked down all three of his field goal attempts against Buffalo. He boomed a 55-yard attempt and is returning to the form we witnessed during his rookie year.

Center John Sullivan left with a concussion and guard Vlad Ducasse exited with a knee injury. Xavier Rhodes tweaked a hamstring, but later returned to the game.

The Vikings will travel to Tampa Bay to square off with the Buccaneers at noon next Sunday.